Despite the obvious ugly turnovers, the Cowboys' 12-7 loss to the Cardinals featured a number of plays worthy of a second look. Here are some of my selections from the first quarter of action.

We start off today's review with a look at Barry Church.

It's been both suspected and suggested that the Cowboys' new aggressive and swarming defense would be vulnerable to the play-action passing game. The cause for this potential vulnerability is an over-aggressive reaction to a diagnosed rushing play, attacking the line of scrimmage before the possibility of play-action has been eliminated, thus leaving the deep area of the field undefended.

And so we have Church at the snap of a Cardinals' rush. 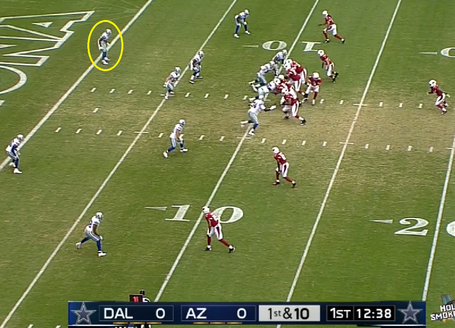 He's on the goal line, which is a bit closer to the line of scrimmage than one would see him in a non-redzone situation. This is an example of the zones becoming tighter in the red zone.

Even though the running back is now running toward the line of scrimmage (rather than beginning a route or stepping up to pass-block), we don't want the safeties to attack until the ball is out of the quarterback's hands. 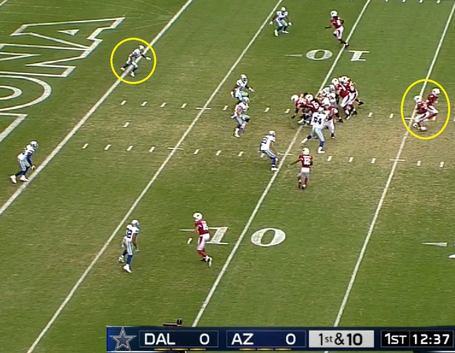 At the moment just after the handoff, we see Church (and the much more experienced Will Allen), maintaining ground at the goal line, and just beginning to attack the play. The back (Rashard Mendenhall) is four yards behind the line of scrimmage to Church's eleven yards behind it. Bruce Carter, whose presence will shortly grace our computer screens, is equidistant from the line with the back.

Church and Carter converge on the ballcarrier, resulting in a one-yard loss.

This is what he hope for with our new defense. Reacting to the run in due time and converging on the play for a minimal gain. With the safeties playing a full 15 yards deep, you could expect this play (without Bruce Carter's excellent read, in this case) to go for three yards or so. If you can hold your opponent to three yards every time, they'll be punting on 4th and 1.

The only concern that I still have is that this defense will not excel in short-yardage situations in which they're forced to play their base defense (non-redzone situations). They won't be able to adequately stuff the line of scrimmage while still preventing a cheap deep ball for a big play.

This next shot is a standalone. I'm not looking at the entire play, but rather highlighting something that everyone should be looking for as a new feature of this swarming defense. 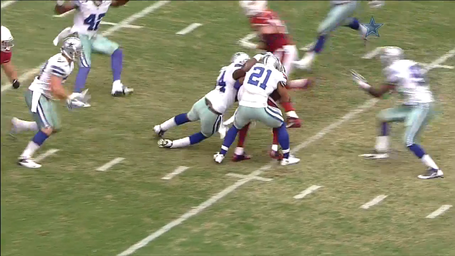 This image came from the end of the play immediately following the Carter/Church tackle above. Sterling Moore was the first man to the ball, but rather than deliver a knockout blow (a la Brandon Underwood) to the receiver, he wrapped up his arms and kept him standing. Bruce Carter was the next man to the ball, and his sole focus was attacking the football, going to his knees while trying to rip the ball away.

The rest of the defense joined in subsequently before the play was blown dead. Let's take just one more look...

...almost brings a tear to my eye.

Typically, I highlight individual players and their performances in these plays, but with the offensive line that often doesn't give you the best view of what's really happening on the play. So for this play, we'll be looking at both Travis Frederick and David Arkin to see how they function together at the point of attack. 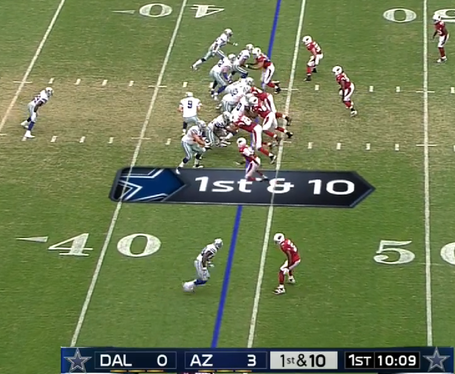 You can easily see Frederick in front of Romo. Arkin is lined up at left guard. Both are engaged with Cardinal defensive linemen. Murray is headed toward the left side on this play (technically, it's been said that our running plays don't have a set hole to attack, however the point of the exchange reveals that this play is a typical dive at heart). 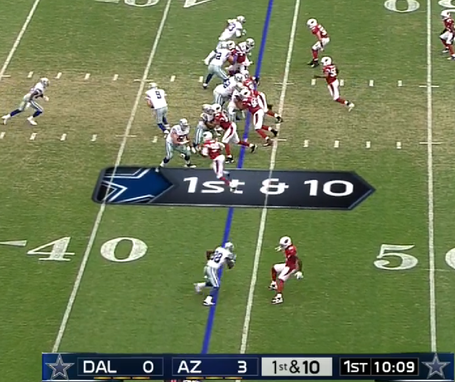 A mere instant later, we see that Frederick has already placed himself between his defender and the hole. Arkin, to a lesser extent, has also started to achieve favorable positioning. Remember that 3-4 fronts are generally harder to move in the running game (the 3-4 was designed to stop the run, after all), because of their bigger-bodied linemen. 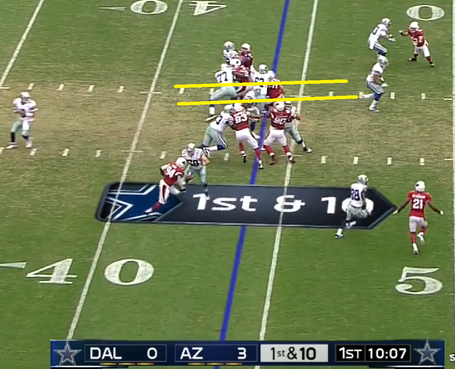 Let a second or so tick off the clock, and that favorable positioning has turned into a full-blown highway for Murray to cruise through. The only lineman in this picture who seems remotely close to being beaten is Mackenzy Bernadeau, though it should be said that Calais Campbell, the man Bernadeau's blocking, isn't exactly a slouch.

At this point, Murray has the ball at the line of scrimmage with blockers in front of him. He gets nearly ten yards on the play. It's amazing what one can do with adequate - or even good - offensive line play.

Here's one more look at that hole: 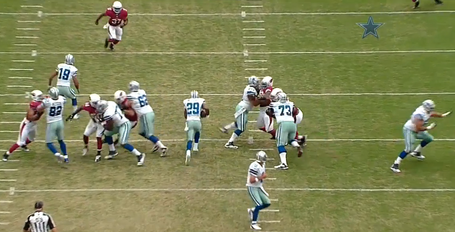 For those interested - Austin makes that block on the safety to give Murray an extra yard. The focus is still on that beautiful running lane. Let's have some more of those, please, and in games that count. No one will blame you if you set that image as your wallpaper for the week. 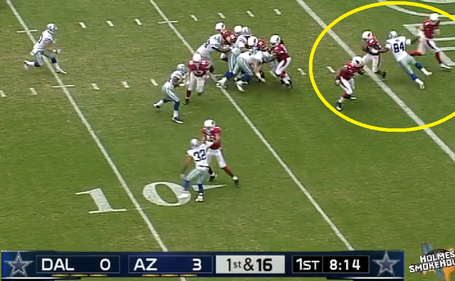 Not many guys in the NFL can nearly pull of a safety against a running play designed to neutralize them. The tackle got a good shot in on Ware, which was supposed to allow the running back to escape inside and the tackle to move on to the second level for another block.

The play was successful in design and execution, but still serves as a highlight of how dangerous Ware is, even against the run, with his hand on the ground.

Despite the first quarter starting off with an ugly special teams turnover for the Cowboys, it still provided us with some glimpses at a team that could be special this year.

What first-quarter performances did you like the best? Were there any I missed? Let me know what you think, BTBers!