A selection of plays from the second quarter of action in Arizona continues our review of the preseason contest.

In the past I've tried to stay away from one-off highlights, or even highlight plays in general, because they're plays that most of us are familiar from watching the game, or even watching highlight reels of the game. I guess I'm just really excited to be back to football, though, because I simply can't resist capturing these plays anymore.

It also helps that this second quarter started off with some truly explosive plays.

So here we have Dez Bryant and Patrick Peterson, battling for a well-placed back-shoulder toss. 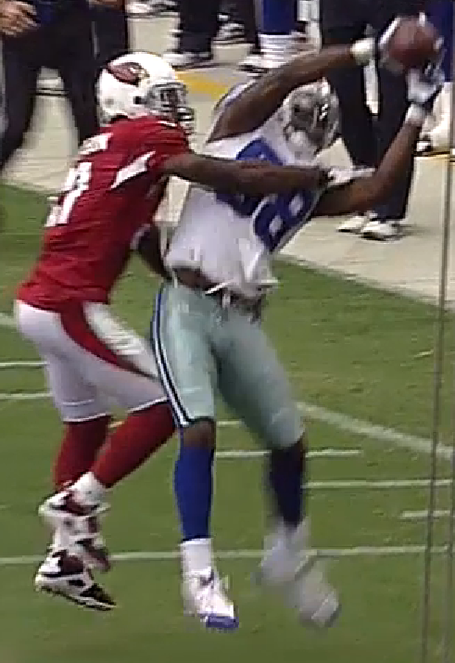 I won't cry foul on Peterson for playing physical defense here, because Dez was grabby too, before he jumped, getting a bit of a push off the top of Peterson's shoulder pads. This is the non-(legally)-defensible play, it's the Kobe-Bryant-fadeaway of football passes.

We'll use two frames to capture the very next play from scrimmage. 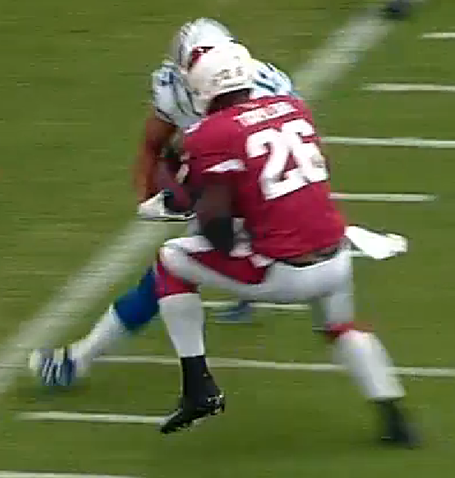 This starts off like a typical safety-bumping-receiver-out-of-bounds ending to a decent catch-and-run. Of course, we know how this play actually ends. 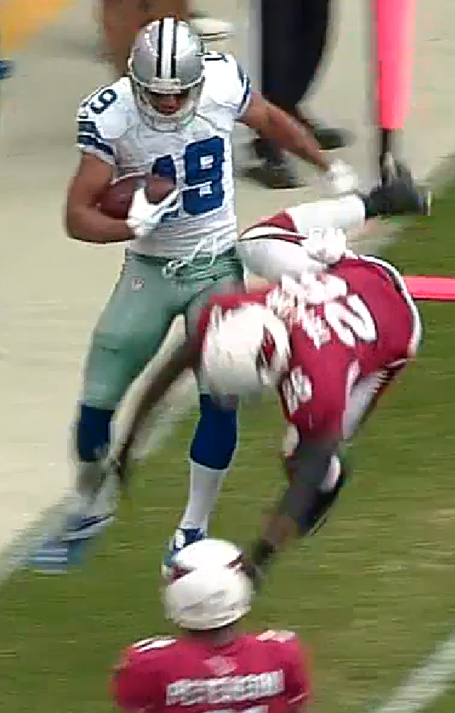 I'm not going to cover DeMarco Murray's head-first flattening of a defender on the next down, because Miles Austin's was truly the better play. Austin lowered his shoulder and exploded through the body of the defender. Murray, on the other hand, used his helmet as a weapon to run over the defender, which isn't something I can get very excited about when I consider player safety.

Still, if our offense can capture any of this fire in the regular season, the games will be very fun to watch - at least from a Dallas perspective.

Seconds later, we have another amazing play - this one with a less-than-stellar ending. 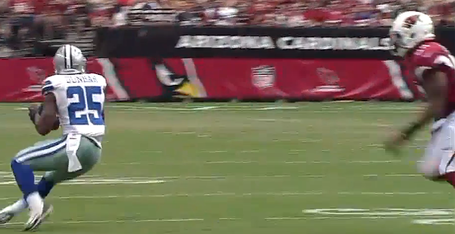 That explosive step is what allows Dunbar to completely circle around two pursuing defenders, exhibiting what can only be described as an embarrassing discrepancy in agility. 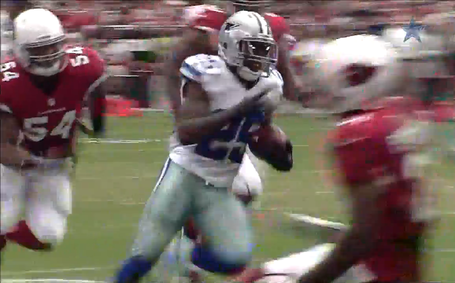 Dunbar continues to navigate through a blur of red jerseys, as defensive backs and linebackers alike are forced to pull up, turn, and watch the show after being easily evaded.

The ending of the play reveals it to be a tragedy, but the build-up ought not to be forgotten. Ball security can be, and is, taught.

We move on to another potentially explosive play that wasn't.

At the start, we see DeVonte Holloman executing a SAM Blitz directed at the strong side of an overloaded two-tight-end set. 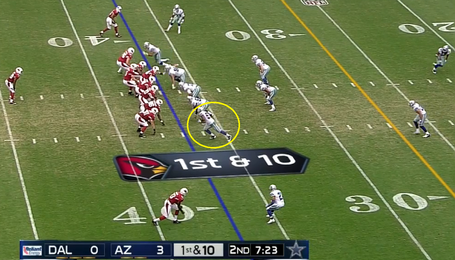 Holloman, circled, would typically be blocked by the outside tight end in this scenario. 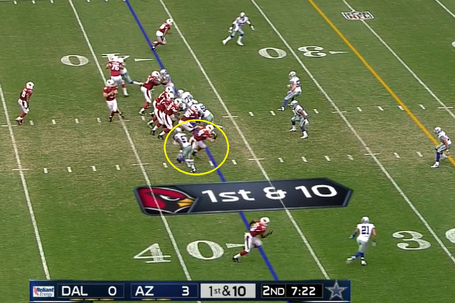 Instead, the tight end appears to have been assigned a pass pattern for this play. He fails to so much as discourage Holloman's advance and allows him a free run to quarterback Drew Stanton. 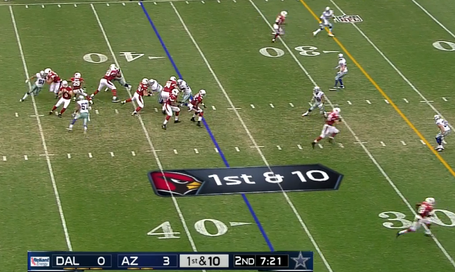 Stanton fails to recognize his impending doom before hitting his back foot at the end of his drop. At that time, he knows that he has to get the ball out immediately to avoid the sack (I'll also add a quick acknowledgement of Kyle Wilber's quickness around the edge - he seems to also be closing in on a sack if Holloman wouldn't have forced a hurried throw).

This is a double-edged sword, blitzinging from this side. The quarterback can see you, which can cause one of two outcomes. Either the quarterback is warned of the coming hit and therefore smartly throws the ball away, or the quarterback sees the free runner and, terrified, tosses a duck into the secondary hoping not to get hit.

We can't be sure which of the scenarios played out in the case of Drew Stanton, but we do know that the pass attempt was ill-advised as it was likely to result in a turnover. Eating it would have been the better alternative, so perhaps Stanton was scared into a poor decision.

We know that the outcome of the play, however, was not as desired. But let's have one last look at it, anyway. 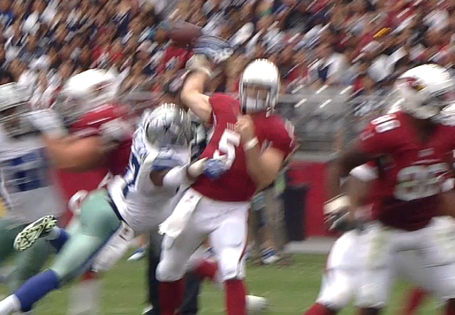 Not bad for a sixth-round pick, I'd say.

Next on the agenda is a little wrinkle that I doubt many expected to see from Kiffin.

We know, courtesy of DeMarcus Ware, that rushmen in Kiffin's scheme are attacking the quarterback '94% of the time.' But what about the other 6%? Logically, that would be time spent in coverage.

Of course, Ware might be guilty of doctoring the numbers a bit, but I was intrigued to see how and when the Cowboys would employ their rushmen in coverage. I managed to find an example. 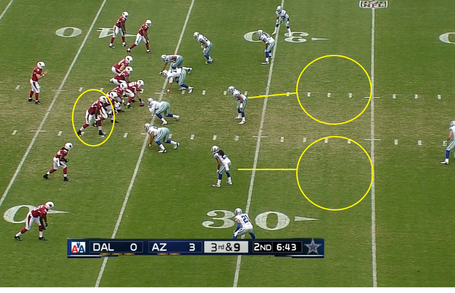 Circled for your convenience are Arizona's lone tight end in this empty backfield set along with the zones to be played by Brandon Magee and BW Webb in this Nickel defense. The Cowboys are sending five, including Holloman from the weak side, so the middle of the field is left to those two defenders.

The situation is third-and-nine, so what you see next really won't make any sense. Bear with me. 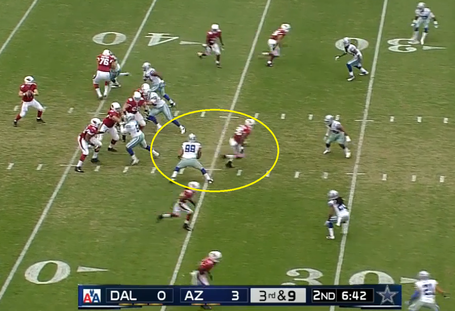 What could our big pass-rushing strongside defensive end be doing? His move to the middle of the field was abrupt at the snap, and, almost as soon as he got into the position you now see him in, he ran back and attacked the right tackle as he would have normally done.

Jerome Long is covering a tight end! More specifically, Long is taking away the short hitch route that tight ends often run in short yardage situations. If the tight end had hooked at this point, Long would have undercut the route and made a play on the ball; the tight end did not stop, however, and Long got back to business in the pass rush.

As my first frame showed, Webb and Magee are covering the middle areas of the field, but at a considerable depth. This set of zones leaves the defense vulnerable to short, underneath patterns, such as the tight end hitch. On third and nine, that doesn't seem like a route that I would be looking to defend, but this is the preseason. In preseason, coaches call plays that occasionally do not match the game situation exactly, and thus appear to be bad decisions. In reality, the coaching staff is simply throwing a test at his defenders and seeing if and how they execute.

There was no route to defend, so I can't say whether or not Long passed the test. I will say, however, that I'm excited to see this defensive wrinkle succeed at some point in the regular season. Perhaps calling for it on third and nine is a way of obscuring it from opponents' situational film study, keeping it out of their offenses' consciousnesses when they gameplan for third-and-short.