The Hyperinflation Of "Elite" Quarterbacks

When almost a quarter of the starting QBs in the league have a Super Bowl ring to their name, using those same rings as a way to define elite quarterbacks quickly loses its value.

Share All sharing options for: The Hyperinflation Of "Elite" Quarterbacks

Many of the analysts and color commentators we watch, listen to and read on a regular basis had their formative years in terms of their football education in the 1970s and sometimes even earlier. As anecdotal evidence to support that hypothesis, here's an overview of the panelists on three Sunday pre-game shows, including their age and year of birth:

This is by no means representative of all the analysts and commentators out there, but it does underline that a lot of the people who present football to us coached, played, or learned about football in the 1970s. And while there's nothing principally wrong with that, the way the game of football is played in 2013 is significantly different from the way it was played in the 1970s. Yet football commentary is filled with precepts and ideas that may have been relevant in the 70s, but have become largely irrelevant in today's game. Here are just three random examples of that:

There are many more of these precepts that have carried over from a couple of decades ago into today's game, but the one I'd like to focus on today, as the title of this post implies, is the idea of the elite quarterback.

The first AFL-NFL World Championship Game was played after the 1966 season, on January 15, 1967. In this game, which later became known as Super Bowl I, the Green Bay Packers defeated the Kansas City Chiefs. The Packers were led by Bart Starr, who would once again lead the Packers to the title in the next Super Bowl.

The following Super Bowls were won by a string of football legends. In succession, Joe Namath (68), Len Dawson (69), Johnny Unitas (70), Roger Staubach (71), Bob Griese (72 & 73), and Terry Bradshaw (74 & 75) quarterbacked the winning teams. And every single one of these QBs is in the Hall of Fame today. That Hall of Fame run came to an end in 1976 when Oakland won the Super Bowl, but Oakland's QB Ken Stabler never made the Hall of Fame.

Somewhere during that initial period, the idea of the elite QB must have been born, and with it the idea that an elite QB had to have won a Super Bowl ring. By its very definition, "elite" status can only be afforded to a "select few", and throughout the 70s and 80s, only a select few QBs in the league were actual Super Bowl winners:

Between 1970 and 1991, there were never more than four or five active QBs in the league with a Super Bowl ring on their hand.

So with the exception of four years in the mid-90's when there were six, there were never more than four or five Super Bowl-winning QBs in the league at the same time. But that changed in the new millennium. Here's how that number has increased over the last 13 seasons. 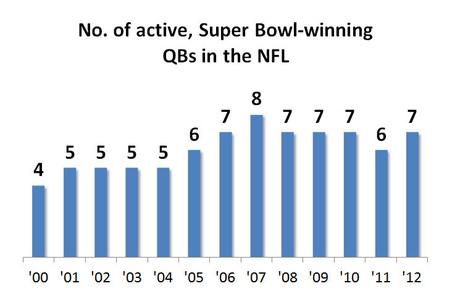 Over the last few years, the league has averaged seven active Super Bowl-winning QBs, with a peak of eight in 2007 and a minor blip in 2011 after Brett Favre retired, but that slack was quickly picked up by Joe Flacco.

Entering 2013, seven QBs (Tom Brady, Ben Roethlisberger, Peyton Manning, Eli Manning, Drew Brees, Aaron Rodgers, Joe Flacco) will have Super Bowl rings to their names, and there's a good chance that number could climb back to eight with the likes of Matt Ryan, Matt Schaub, Colin Kaepernick, Russell Wilson and perhaps even Tony Romo in the mix for the Lombardi this year.

And when you have a quarter of the starting NFL QBs sporting a Super Bowl ring, it gets hard to talk of a "select few". Using Super Bowl rings as a way to define elite QBs may have worked in the 70s and 80s, but today, where every Joe, Ben and Eli can win a ring or two, perhaps it's time to come up with a new way to define "elite".

Of course, Trent Dilfer and Brad Johnson would probably disagree, but so be it.