After the Cowboys left Oxnard, there was only one practice left that was open to the public, the Silver and Blue Debut in AT&T Stadium. And since we brought you coverage of every practice out in California, it seemed almost mandatory that we had someone in Arlington to cover things.

Share All sharing options for: Dallas Cowboys Practice Report: Live At The Silver And Blue Debut

It was a bit of luck that I happened to have the day off from work on the day the Dallas Cowboys opened the practice in AT&T Stadium to the public. I had never been to the stadium in Arlington (I never made it to Texas Stadium, either), so not only was this a great chance to get my first ever live look at my favorite team, it was actually a bit of a bucket list item for me. So although I am very glad to share what I saw with all of you, I must admit, this trip was really for me. 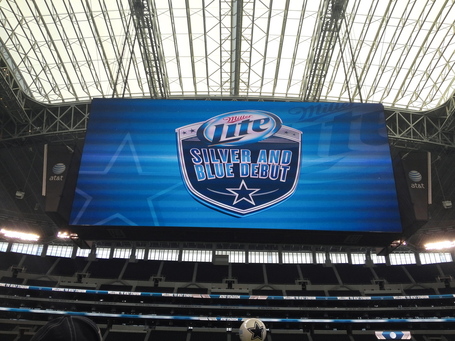 And I am so very glad I went. First, the venue formerly known as Cowboys Stadium is a truly remarkable edifice that is well worth the over two hour drive I have to make to get there. And there is just something about actually seeing all the players and coaches I follow so intently with my own eyes. Oh, and did I mention that the Cheerleaders gave a performance, too? And you know something? They are really good at the dancing stuff. Until you really watch them, you don't realize just how athletic they are, besides their other obvious attributes. 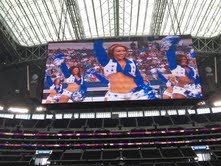 But enough of that. I got into the stadium, settled into a seat right on the 50 yard line, and soaked up as much as I could of the whole experience. Here are a variety of impressions I had. 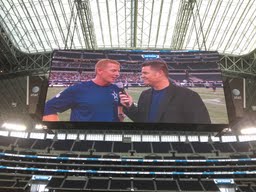 If all that seems a bit like trying to drink from a firehose, that is kind of the way it felt trying to absorb and jot down some notes on the practice. Given that it was in shorts and helmets, the session did not give much information on things like blocking and the run game, so the observations I had were tilted towards the passing game, where you can at least see routes develop.

I also got to meet a "rival" blogger, Mark Lane from The Landry Hat, who chatted with me for a few minutes about things. And thanks to him and KD giving shoutouts, I finally got over 500 followers on Twitter. At least for the moment.

Hope you enjoyed the report. I had a blast doing the research.