When we hear talk about the Cowboys offense in 2013, we hear a lot about creating mismatches. Let's take a look at a creative way we may see Bill Callahan and Jason Garrett try to create these match-ups to attack defenses.

Share All sharing options for: Dallas Cowboys On the Chalkboard: Creating Mismatches

When most people talk about mismatches in 12 personnel they talk about using TE's to get matchups against smaller defensive backs, or slower line backers where they can use their size and athleticism to make plays down the field and underneath. But I want to look at a way to create these mismatches for guys like Dez Bryant, Miles Austin & Lance Dunbar with the 2 TE package.

Let's take a look at chalkboard to get started. 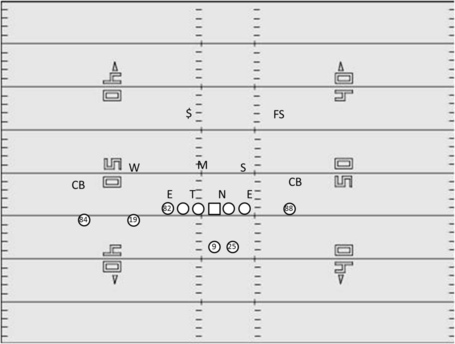 In this set we have 12 Personnel aligned in a formation likely called "Trojan Left" by the Cowboys, with Dez Bryant aligned as the backside X receiver in a "Nasty" (reduced) split. Trojan is a variation of the 3x1 Trips formation that puts the second TE outside of the Z receiver to the trips side.

I have the defense in a base 4-3 over defense. With the Will LB split out over the Z in the slot, in this case, Miles Austin. If this is how the defense sets up, we have an automatic mismatch. Miles Austin vs a LB will mean advantage Cowboys 99.9% of the time.

Let's look at some other possibilities for how this defense could react to this formation. 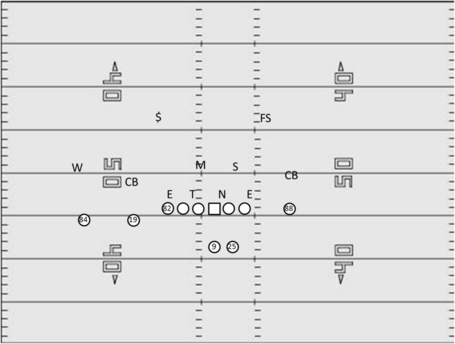 The difference here is that the defense has rolled the Will LB all the way out into space to Cover our "F" Tightend, in this case, James Hanna. 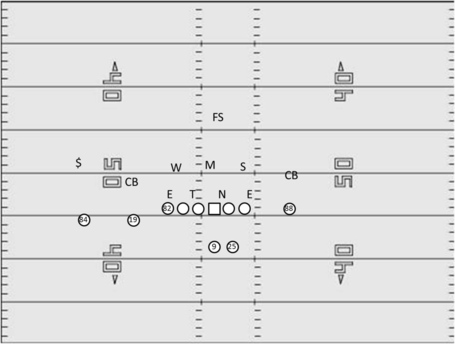 Here we have the Strong Safety rolled out over Hanna, with the CB inside on Austin. Another alternative for the D would be to swap the SS and the CB to have the SS inside and CB outside.

Now lets look at the next step we'll take in putting this defense in a bind. 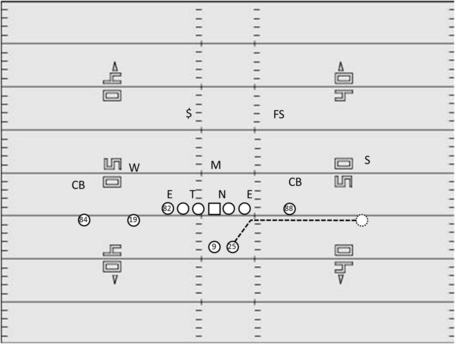 We are going to send Dunbar in motion wide right outside of Dez Bryant. With the defense moving the Sam LB outside to match up with him. Another possibility is that the CB could bounce outside with him. Now we've got our next mismatch. We saw in the pre-season game vs Arizona, that Lance Dunbar in space vs a LB is a big time advantage for Dallas. Let's look at an alternative. 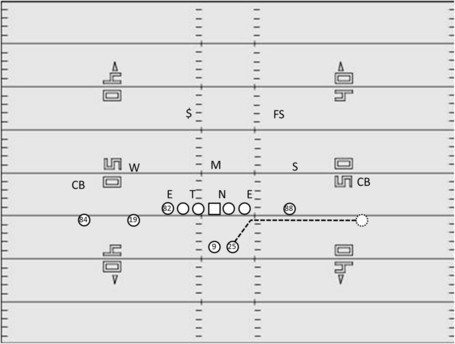 This alternative bumps the CB outside to cover Dunbar outside, while bumping the Sam LB out over Dez. A variation of this option would be to bump the FS down over Dez and leave the Sam inside. Either way, Dez vs a Safety or a LB means huge advantage Dallas.

So what we've done with this formation and motion is pull the defense out of whatever defense they may have called in the huddle and force them to adjust to try to match up. As well as limiting the potential dogs (5 man pressures), or blitzes (6 man pressures) the defense might throw at you. Let's look at a set of route combinations that I'd call from this look. 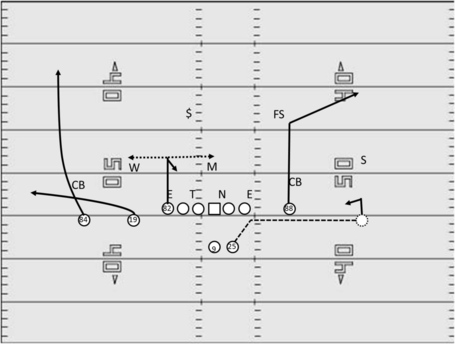 To talk about these routes, let's look at each half of the field separately. First we'll look at the closed (strong) side. This is the stick combination from the trips look, with the variation of having Jason Witten running his specialty, an option route. This becomes the hot route vs a Blitz or Dog from the defense.

If Romo decides to go to this side of the field, he's got an easy throw to whoever has the mismatch, which likely means, who ever has the LB covering them. Whether Hanna is a better athlete than the LB or not is basically irrelevant because he's going to be much more well versed at running a 9 (Go) route down the sideline and going up to make a play than that LB will be at defending it.

As we look to the Open (weak side) we have the Smash, or Smash-7 Combination. Again the decision for Romo is largely driven by who ever has the mismatch. If the LB or FS walks out to Dunbar, the ball goes there, if one of those guys walk out to Dez, he's the target on his 7 route.

What we see here, is what I talk about many times in regards to game planning, and play calling. You can use base route combinations, that every team runs every week, with different window dressing (personnel, formations, alignments, motions, etc) to create mismatches, and easy throws for your QB. This makes your offense much more difficult to defend, without making it harder for your team to learn. As a lot of coaches say "It's easy to teach a guy to stand in a different place and run the same routes he always runs."