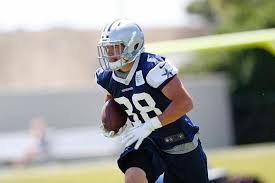 What do you think; has Jeff Heath earned the right to wear the star on his helmet?

As much as we all love to root for the underdog; deep down inside, in places we don't discuss at cocktail parties, we know that Rabblerousr was correct when he wrote that the Cowboys knew, before they left Dallas prior to camp, who they wanted on their 53 man roster. As was mentioned, this is a harsh reality of what players must face when they are forced to fight their way onto a NFL roster. Sometimes, however; the football gods like to play their little games and they conspire to make the coaches' lives just a tiny bit more interesting. That's where guys like Jeff Heath come in.

The young strong safety out of Saginaw Valley State was not on many folks radar prior to the start of camp, but his measurables had caught the attention of one of our front page writers, CotySaxman. In his look at the group of what he termed "elite athletes" that Dallas signed as the 2013 UDFA crop, Coty pointed out that Heath had two measurables that he considered to be in the elite range: a 4.48 second time in the 40, and a 6.88 second time in the three cone drill. He also went on to stress that Jeff had a couple other numbers that worked in his favor by demonstrating just how explosive the young man could be. On the bench he turned in 22 reps, which was actually a better performance than the Cowboys first round selection; offensive lineman Travis Frederick, and that Heath featured a 37" vertical leap. As Coty concluded, the young man had the physical tools that he needed to be a very good safety in the NFL, but that he would need to make his dream happen.

Today I am going to take a look at Jeff Heath's quest to carve out a career in the National Football League primarily through the eyes of one of his hometown journalists, Michael Niziolek of The Bay City Times and mlive.com.

Most of us got our first look at Heath during the Hall of Fame game against the Miami Dolphins. Playing on special teams and at safety during the second half, Jeff recorded three tackles, two of which were solo efforts. In my mind, the play that stood out was a touchdown saving stop that he made on the three yard line. This effort set the Dallas defense up to force a turnover on downs. When speaking with the media after the game, most of us would likely want to focus on that critical play, but Heath felt differently. He was more focused on correcting a coverage mistake that he had made earlier in the game. He had this to say:

"I was in charge of the deep middle, they called a seam route and I was too far up," Heath said. "I knew where I should have been, but I just made a mistake. The good thing was we called the same defense a couple other times and I was in the right position. You just have to learn from the mistakes."

Over at the mothership, Bryan Broaddus had some nice things to say about Heath. In part, Bryan recognized the young man for his physical play, his lack of mental errors in both practice and during the game, and that he was taking advantage of the opportunities that he was given. Most important was that Broaddus stated that Heath had shown up on film.

Not only did he make a touchdown saving play against the Dolphins; Jeff came back the following week to do it once again, this time on special teams. During the fourth quarter Heath chased down Raiders return man Greg Jenkins, who had managed to scamper 50 yards up the field. Camp body or not, making touchdown saving plays in two consecutive games had forced the coaches to start taking notice. Speaking with Todd Archer from ESPNDallas during the week after the Raiders match up, Jason Garrett stated the Jeff Heath "is certainly in the mix for this whole thing."

Through a combination of his hard work and misfortune to Matt Johnson (foot injury) and Eric Frampton (calf), Heath was given more reps during the week before the Cowboys ventured into the desert to face the Arizona Cardinals. Entering the game during the second quarter, Jeff got an extended look from the Cowboys coaching staff. He played the remainder of the game. Taking advantage of his break, the UDFA from the small school in Michigan recorded five tackles on the night, including a pair of solo efforts. He also added a tackle for a loss. On the TFL Heath correctly diagnosed an end around, and he tackled Jaron Brown as the receiver was recovering a fumbled exchange. Jeff Heath had made his football future a topic of conversation for the Dallas brain trust.

Winning some important folks over

Having made the coaching staff well aware of his presence, Jeff Heath returned to Dallas for the dress rehearsal game against the Cincinnati Bengals and promptly made an impression on the home folks. Late in the third quarter he took a moment to rudely introduce himself to a fellow rookie, the Bengals Cobi Hamilton. It was a hit that had many around the Metroplex talking. Our own Moose had this to say:

"We should run this a couple times so kids can see how to tackle today," Cowboys color commentator Daryl Johnston said. "That was well done, wrapped up the legs and everything."

In addition to delivering an impression making hit, Heath also forced Hamilton to fumble, which was recovered by Dallas' Micah Pellerin. It was a play that got the Twitterverse talking. Lets look at what they had to say:

What if I told you that Jeff Heath forced a fumble, then forced his way onto the roster? The 53rd Man. A 30 For 30 production.

Jeff Heath just made the team

And for good measure, our own KD Drummond added this from the Blogging the Boys Twitter account:

Jeff Heath with the big pop and forced fumble, Cowboys third forced turnover of the game.. By the way, Heath made my 53 man earlier this wk

While we may never know if Jeff Heath ever read CotySaxman's words about needing to make things happen; we have clearly seen that he put those words into action. Early in camp he found a way to get himself noticed by the coaches, and making the most of his opportunity, Jeff clearly grabbed the bull by the horns and refused to let go. While we are left to speculate about his spot on the roster being a done deal or not; one thing is for certain. Heath has proven himself to be a Disciple of the Way of the Rooster. I, for one, expect to see #38 on the sidelines against the New York Giants on opening night.

Now it is your turn, Blogging the Boys. What are your thoughts on Jeff Heath's future with the Cowboys?