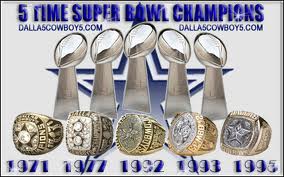 A lot to live up to, but two more Cowboys are stepping up to earn their shot to reach for the ring.

The best part of preseason football, at least for me, is getting to watch the guys near the bottom of the roster and how much effort that they give toward earning on more year on the gridiron. Once players reach the NFL, they are all among the best of the best; even the JAGs at this level are some of the best football players in the world. Naturally an elite few stand out above the rest, but even a player like Stephen McGee, whom we all loved to bash, is still better than 99.9% of the guys playing his position. Today I want to look at two down the roster guys who are in the position of having to bring it every snap to insure that they get to put off finding a "real" job one more year. The guys who have taken the first step toward making themselves hard to cut are Phillip Tanner and George Selvie. Lets take a look at how these players stepped up against the Miami Dolphins.

First, in the spirit of full disclosure, I must admit that Tanner, along with David Arkin, is one of my pet cats from previous seasons. That being said, I was highly disappointed with his 2012 performance. With the loss of DeMarco Murray, due in part to his own health issues, Tanner was unable to claim a solid role for himself in the Dallas backfield. His totals for the year were 61 yards on 25 carries for a dismal 2.4 yards per carry average. As a receiver, Phillip added 4 receptions for 41 yards. As I reviewed during OTA's, Tanner dedicated himself to a complete physical makeover during the off season; and by all accounts, the work he did with strength and conditioning coach Mike Woicek made a tremendous difference in his game. For Phillip Tanner, the success he experienced in Canton is the fruit of being one of Jason Garrett's RKGs.

I won't ever be out worked- This is what I was born to do! #GodGotMe pic.twitter.com/AP0qdlIJuB

While he is not battling for the job as the Cowboys feature back, against Miami Tanner did show the type of performance that Dallas expects out of the top guy. He was the work horse for the offense during the first half, and showed himself to be a Brahma bull while fighting for that extra yard. He demonstrated the ability break tackles and drag defenders down the field with him. For Phillip Tanner it was a breakthrough night as he fights to earn a slot as one of Murray's backups. While he may not have shown a lot of flash while carrying the ball, Tanner did add a pair of 17 yard runs to help power the Cowboys to an early lead. After the game, Phillip summed up his evening with a quote from Garrett:

"Coach Garrett says all the time, whether it’s one snap or 100 snaps, play like it’s your last – take advantage of your opportunity,"

Following the Way of the Rooster has been essential to what Phillip Tanner has brought to Oxnard this time around. Any time a down the roster guy brings the attitude that he will not be out worked, and he seizes the opportunities that do come his way; good things will happen. Come what may, #34 certainly has been giving the Dallas Cowboys everything he has to give. In his post over at the mothership, Dave Helman summed it up best with the first line of his post game write up:

Somebody forgot to tell Phillip Tanner he’d be ceding the backup running back spot.

That tells me all I really need to know about Phillip Tanner; and I suspect that somewhere in California, there is a red headed gentleman who feels the same way.

Selvie has only been a Dallas Cowboy since the 24th of July, but you wouldn't know it by the way he played against the Dolphins. In fact, had it not been for some key losses on the defensive line, he wouldn't be in football right now. A former seventh round selection of the St Louis Rams, Selvie never matched the performance that he turned in early in his collegiate career at the University of South Florida. George carried the label of "having first round talent but seventh round production" with him through the final two years of his time in college and then into the NFL. After a full season as a Ram, Selvie had brief stints in Carolina and Jacksonville. This past spring he was signed by Tampa Bay and released a month later. Had Dallas not needed some camp bodies along the defensive line, George Selvie was looking at a future without football. Judging by how he has performed since getting a call from Dallas, he did not like how that future looked. As our own Tom Ryle stated in his look at at some of the journeymen trying to fight their way onto the roster, George Selvie is not making it easy for the coaches to introduce him to the Turk.

Spurred on by a a brief conversation he had with Dallas Hall of Famer Emmitt Smith, Selvie hit the ground with his motor running wide open, and he hasn't misfired yet. Nick Eatman had this to say about him:

This George selvie probably hasn't even checked into his room yet and he's making plays .. Looks pretty good

It is still early, but Selvie certainly has taken to the Dallas-2 scheme being ran by Monte Kiffin. It is the same basic defense that he played in at USF, and like Tony Dungee pointed out during the telecast Sunday night, it is a perfect fit for him. During his first game as a Cowboy George accounted for two sacks, four tackles, and three hurries of the Phin's QBs. As Todd Archer noted, during his post game pressed Head Coach Jason Garrett was very clear about the impression the young lineman has made on the coaching staff.

Two quotes from Selvie show that, in addition to having first round talent, he might just be one of those RKGs that we talk so much about.

"It’s great to get out on the field and show your talent, so that’s what I did. I just went out there and played and had fun,"

"It’s a producing league," Selvie said. "You produce, you stay in."

Like Ernie Sims last season, George Selvie has gone from out of the game to having a second chance to make something of himself in the National Football League. It looks like he might earn a chance to put off finding a job just a little bit longer.

From the day he took the helm in Dallas, Jason Garrett has talked about the team needing "NFL level depth" and competition up and down the roster. Phillip Tanner and George Selvie might never become starters with the team, but each man has stepped up and shown that he is willing to give all he has to keep the dream alive. As it stands right now, both have taken a tremendous first step toward making the final 53 man roster. No matter if they make it or not, Tanner and Selvie have proven themselves to be the type of guy who leaves nothing on the table. That is what being the Right Kind of Guy is all about.

What say you Blogging the Boys? Do these young players have what it takes to earn one more season in the spotlight?