The Dallas Cowboys deployed their new Base 12 Personnel offense and some new offensive lineman. How'd it work out? Let's get to Tracking.

Nothing can be gleaned from one performance. We know that. However, one can build a foundation to which future performances are compared to, built on or regressed from. The preseason is a marathon unto itself, especially this year with five contests to prepare for September 8th. Even though the offense was missing 8 of 11 projected starters, I still wondered how they would fare in their first real test.

Saying the offense was missing 8 starters is a little misleading. Based on offseason reports, no one would be surprised if Ron Leary won a starting job this summer. The surprise would be the play of project man, David Arkin, as due to injuries he now runs with the first team. This resulted in Dallas rolling with what has a good chance to be at least 4/5th of their starting offensive line, if not all five.

A tracking was in order.

As it was our first opportunity to witness Dallas' offense without a fullback as a planned course of action, I also wanted to pay close attention to the way that Bill Callahan called the plays and formations. As this is a tedious exercise, I limited this one to the performance throughout the first quarter. Three complete drives, and the start of a fourth gave us 17 plays in all.

Some quick notes. Anthony Armstrong took on the Dez Bryant role, as the main 'X' receiver, with Dwayne Harris playing Miles Austin. The entire first half play-calling seemed to be runs or quick passes, as to not tax the offensive line with holding up for too long. I'd hold off any anointing until they get that test; Garrett's offense is vertical and needs time for routes to develop.

Dallas opens up with 12 personnel, both TEs inline left, with Harris in slot and Armstrong as X receiver right. Miami playing base 4-3 with line of Wake, Vaughn, Soliai, Shelby.

On snap, line gets good push, moving LOS forward 1.5 yards by the time Dunbar receives the handoff. Escobar (inside TE) only blocker that loses his battle, as he has DE Derrick Shelby 1-on-1 w/ Tyron moving to a LB on second level. Line holds and Escobar impedes enough that Dunbar able to scoot around left end for four; pushed OOB by S after he disengaged from Rosario block.

Balanced 12, Rosario left, Escobar right with WR to each side. Rosario at H-back motions to right side. Both TE go out on routes, line creates solid arc allowing quick throw to Rosario up the seam for a completion; 6 yards in air, 13 YAC.

13 personnel with Smith inside left, Escobar outside left and Rosario H-back left fakes motion and then returns to H-back left. 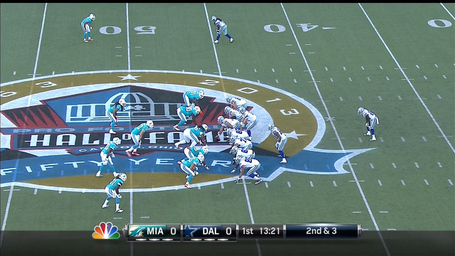 (Each picture can be clicked to enlarge in a separate window.)

On snap, David Arkin pulls left and picks up LB Trusnik to spring Dunbar to the outside. The three TEs create a hashmark tunnel for Dunbar. 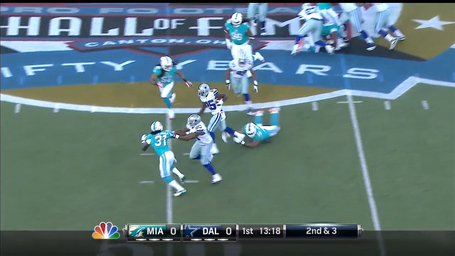 Dunbar escapes an ankle tackle attempt by Koa Misi, who had peeled off Escobar block. Gain of 11. 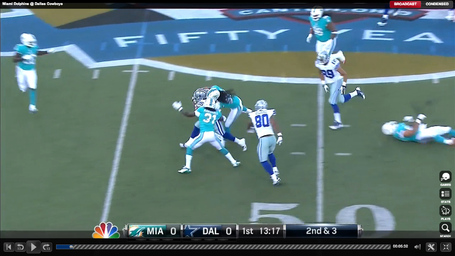 Balanced 12 again, Dolphins bring S up for eight in the box. Run right, appears that Smith doesn't get to second level inside Leary quick enough, or confusion/delay over pass-off responsibilities, but mistake lets LB Wheeler into backfield to meet Dunbar for no gain.

Dallas clearly was trying to avoid putting pressure on the line, with ZBS plays and quick throws. Cameron Wake was a non-factor going up against Doug Free, which bears watching. There really weren't any long developing plays on this drive, everything was pretty quick with no downfield shots. Frederick made all line calls and also made the identifying Mike calls for the defensive formation. Both Leary and Arkin seemed sound in their assignments and none of the three were thrown back to the detriment of the play. The one line "mistake" was the pass-off of defenders between Leary and Smith that resulted in a no gain run by Dunbar. Escobar did a good job getting to his man, but there were a couple of plays where his assigned man was the first to make contact with the runner.

Balanced 12 w/ Escobar left, Rosario right. Weems and Coughman have replaced Smith and Free. Dolphins respond with 5 on the line. 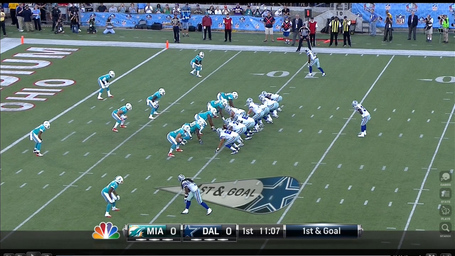 Zone block left as Arkin shoots to the 2nd level to engage LB. 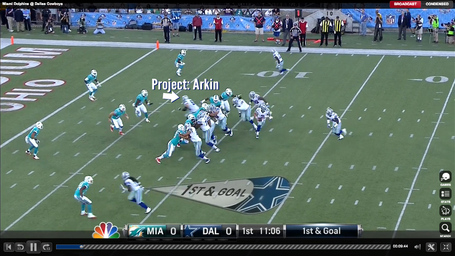 Coughman and Rosario both cut their defenders and eliminate them from pursuing the play going left. 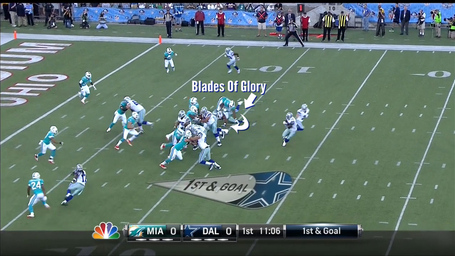 Leary chips Weems' DE and gets him out the play before going to LB, getting him off balance. Escobar engages his LB as Tanner enters the zone and again Gavin's man is the first to make contact, slowing Tanner down. 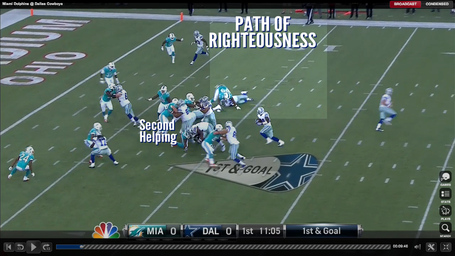 Tanner will gets his four yards, however if he went against first read the entire right side was wide open based on the cut blocks and probably would have been a touchdown and a glorious celebration of Callahan's blocking principles and play calling. 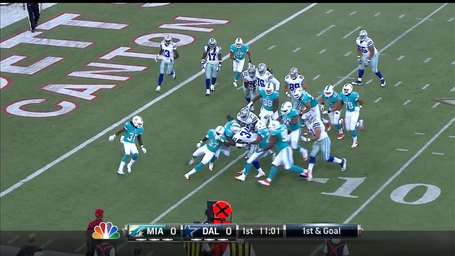 S11 personnel, X-Armstrong, Y-Beasley, Z-Harris, Esocbar inline right. Both Weems and Coughman pushed back into the pocket. Quick fade attempt to Beasley from Stephens, DPI. If Stephens didn't want to attempt throw, there was room to step up in pocket as interior of line held together.

14 personnel with Cochart as FB, Escobar left, Smith inside right, Rosario outside right. Leary pulls into middle behind Frederick as rest of line goes to ground. Tanner tries to get over but is stopped at goal line. Not much push from offensive line, allowed linebackers to fill hole and stop Tanner.

14 personnel Cowboys reverse formation sides. This time, able to create a crease as middle/right collapse their men to the ground and the left side builds a wall to create the tunnel. Tanner is met in hole by LB but able to win battle and force himself over the goal line for the touchdown.

Interesting seeing the 14 personnel and have to wonder who will play what role with Witten and Hanna in the game. Interior guys once again seemed to do a good job allowing the pocket to remain, but starting in the red zone there was no cause for elongated play development. Sole breakdown came from the 4th and 5th tackles.

13 personnel, Escobar inline right, Smith in motion as H-Back, Rosario in as the FB. Dolphins in Base 4-3. 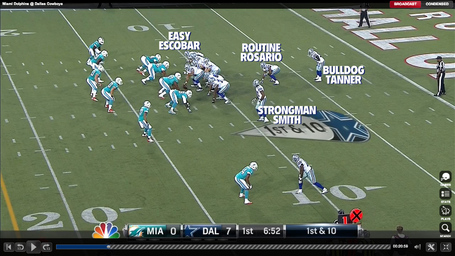 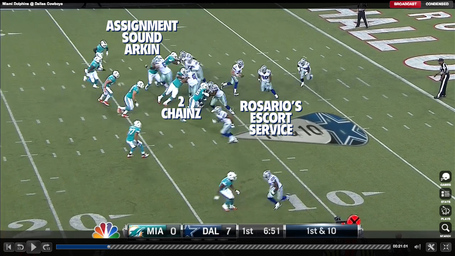 Once again, Escobar does enough to keep his man from the tackle, but not enough to keep him from making contact and slowing the play. Tanner initially follows the Rosario block but then cuts inside of it as both of the LBs on that side flowed to the outside of the Leary/Frederick double team. 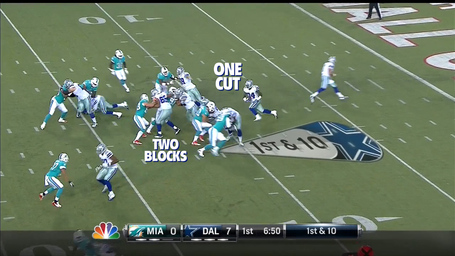 Leary peels off the double to catch enough of the LB to allow Tanner through the hole and to the second level.Arkin has released his 3tech to Coughman who had a running start to attack him, and is now sealing the lane against the lone remaining LB. 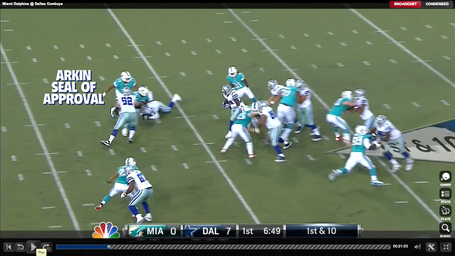 This gets Tanner 9 yards deep before any meaningful impact is made by a defender. 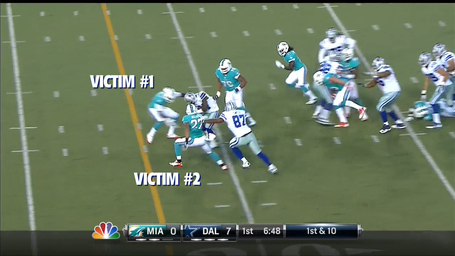 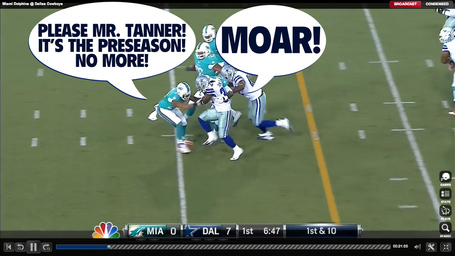 Tanner powered his way through the tackle for an additional 8 yards, gaining the longest run of the day.

Dallas with a unique 12 look, with Harris and Armstrong inside the two TE in a close formation. Dolphins in a Base 4-3. A quickout to Escobar towards the right sideline is a three-step drop, no real time for pressure. Gain of 3.

S11 personnel with Escobar inline left. Dolphins in a nickel. Frederick and Leary successfully double-team DT Robertson, but Weems is beaten and Coughman is beat badly, forcing Stephens to roll out right. He completes the pass to Beasley who was crossing the field, but just short of the marker.

After the first play with almost flawless execution, the drive fizzled. Once again, the blocking issues of Escobar trying to contain his man reared their head, this time to the effect of causing a 2nd and long. The backup tackles who we hope don't see a down this year ended things. Formation wise, a new wrinkle was added to the repertoire of the team, and I can only imagine the havoc this look will cause when it's Jason Witten and James Hanna perched on the outside of Dez Bryant and Miles Austin. That would expand the threat of the second down play tenfold.

12 personnel, Escobar inside left, Rosario motions into the backfield. Interior linemen as well as Weems stonewall the Dolphins line, but Derrick Shelby bulrushes Coughman back into Stephens and collars him for the sack. To make matters worse, Escobar gives little second effort and allows his DE to walk him back into the play and ensure any escape from Shelby would not amount to much.

All in all, an interesting first quarter for the Cowboys offense. Again, they really didn't try much downfield and I suspect it's out of fear of the line having to block for too long. Sooner or later, they will have to test these guys and see what they can do. For what they were asked to do, I think the young interior acquitted themselves very well. Arkin was pushed back a couple times, but functionally played well and successfully reached the second level and engaged his man. Frederick didn't display the power we've been prepped for, but he wasn't overpowered and his intelligence of diagnosing the defense was apparent to anyone that didn't mute Cris Collinsworth. Leary was the brightest spot, working combo blocks and just having the one mistake between he and Smith on the pass off.

Formation-wise, I simply can't wait to see how they deal with these skill guys when their first, second, third, fourth and fifth options in the passing game, as well as their lead back, are in the fold to be deployed. We have four more games to watch this grow and improve.