Take part in my post-game ritual of examining and analyzing the game through selected still-frames of the action, this time focusing on David Arkin.

There's nothing like football season. Being always a matter of days away from your team's next game is a wonderful feeling. For me, sitting at the computer knowing I always have more bits of game to re-watch and review is comforting. It feels like things are now the way that they should be.

Typically, with Freeze Frames, I take one of two approaches: either I notice something during the game and come back to spotlight it, or I simply start re-watching the game from the beginning, and start capturing the things that catch my interest. Due to (technical) complications that I won't get into negatively impacting my view of the game live, I took the latter route this time around.

David Arkin quickly caught my eye. No, not because he was in uniform and playing (that's normal for him in preseason), but because he stood out early with his play as a subject worthy of investigation.

We start off in what appears to be the Ace formation (12 personnel, singleback, balanced). David Arkin is highlighted with an arrow to the head. This capture was taken at the moment of the snap. 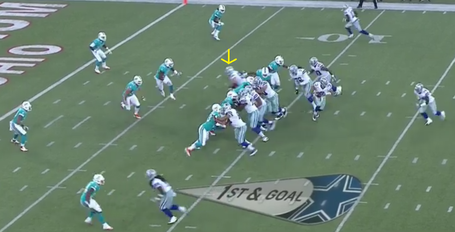 Shortly after, we check in on Mr. Arkin's progress. The quarterback has just finished turning around, the other lineman have just initiated contact with their blocking targets, and Arkin's made his way a healthy two yards downfield. His quickness out of his stance is fairly noticeable. 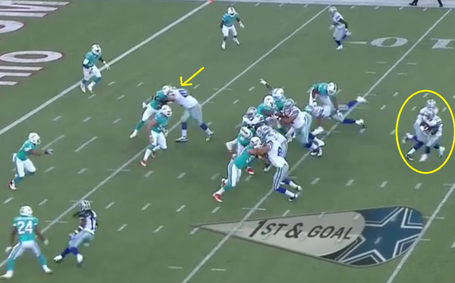 Now, the moment of the handoff. Arkin has made it to his target, five yards downfield, and locked on before the running back even receives the ball. This early contact allows Phillip Tanner to see all of his blocks laid out before him, without worrying that a linebacker might avoid an incoming lineman, plugging a hole.

Had the cut-block on the right side been more immediately effective, Tanner might have taken the run to the right side and found some success. By the time the cut takes out the defender, Tanner's already decided on running left. Nevertheless... 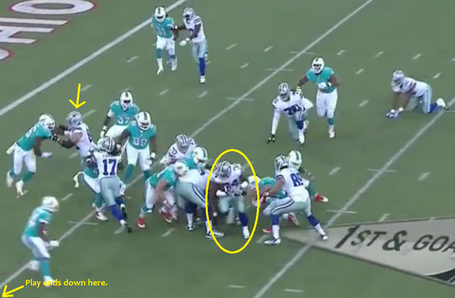 The play goes on. And Arkin continues to drive his man, now nearly into the endzone and to the outside of the hash marks. While other players can be seen watching the play continue from their knees, Arkin continues to keep his feet moving and drive the defender.

The very next play of the game sees Arkin lined up across from Miami defensive end Derrick Shelby. 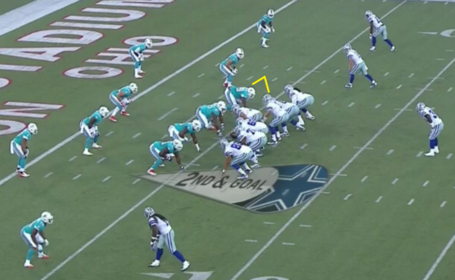 The Cowboys are in 11 personnel, with a 'strong' left side (tight end left, slot receiver right). 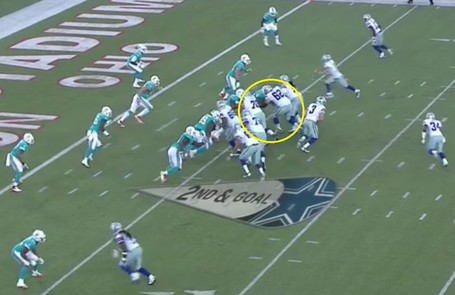 The initial 'pop' along the line sees Arkin and Shelby going head-to-head, Arkin caught with his arms down. It's tough to win a battle in the trenches once a defender gets past your arms (hence the complaints about Phil Costa's short arms), so Arkin's in a bad situation here, especially for a 'finesse' guard. 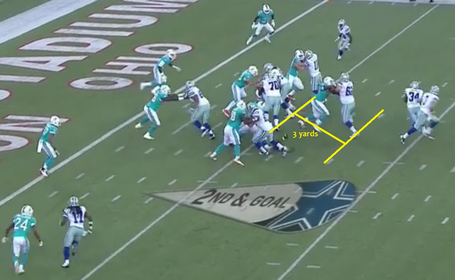 By the time Tanner has the ball in his hands, Shelby, a UDFA pickup by the Dolphins last season, has driven Arkin three yards into the backfield, seriously jeopardizing the play. By this time, Arkin has managed to work his arms back up onto the shoulder pads of Shelby, and more-or-less halts his backward progress. The play would be stuffed soon after the still due in large part to the early penetration allowed by Arkin.

One of the major complaints regarding his continuing development was a lack of NFL strength. After a couple years of seasoning, his body seems to be adjusting to the power required to work in the trenches. However, his strength limits his ability to recover from technical mistakes, such as in the play above.

When Arkin has the opportunity to go to the second level, his athleticism allows him to do so. He uses a slightly improved version of the inexperienced lineman tactic: grab a guy significantly smaller than you and keep moving your feet. It looks like this play below: 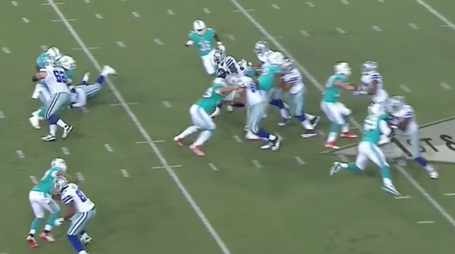 This is another example of Arkin exploding into the second level and removing an opposing player from the play. Again, his quickness and footwork look very good, but the inexperienced lineman technique seems to be leading to his playing tall. He stands nearly straight-up when latched onto linebackers, using his superior size and strength to maintain control of the block. Against bigger, stronger defensive linemen, however, that tall technique sacrifices leverage to a player of similar or greater strength, which results in losing the battle on many occasions.

When he does get his pad-level down and his hands into a defender, he's able to execute with decent precision and move defenders out of his path (though he's still prone to standing up after he gains an advantage, as shown below): 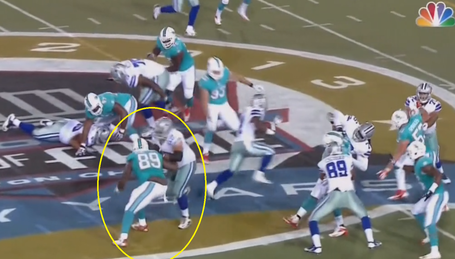 I'm interested in what Coach Callahan thinks about Arkin's technique, and why he hasn't yet developed the discipline required to stay low. If he can fix this flaw, he can become an effective member of Dallas' offensive line. If he can't, he could easily turn into a Dockery-style liability along the line as teams notice his weaknesses and plan to exploit them.

In summary, I liked most of what I saw from David Arkin. He has areas in need of improvement, but he also has a tenacity that most of our players seem to lack. He's consistently looking to get the last shot in as the whistle sounds, which stands out in a crowd of players watching from afar as Phillip Tanner continues to break tackle.