The Dallas Cowboys are investing a lot of time in their special teams in training camp this year. We look at how that could pay off.

In addition to the special teams session at the start of practice, the Cowboys have added a second session in the middle of practice. And that second session is a full-team session; there are no individual drills going on in parallel on the side. Rich Bisaccia has three special teams units he's working with: the first team wearing their regular jerseys, the red team (wearing red practice jerseys over their regular jerseys) and the yellow team. Two teams will be on the field at the same time, one kicking, one returning.

Cowboys Training Camp Report: A Crisp Day In The 'Nard 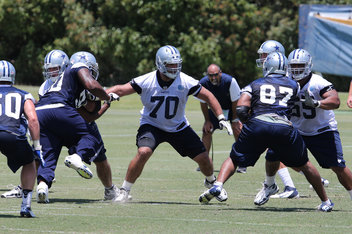 The Cowboys ran a crisp - and at times spirited - practice in Oxnard yesterday.

Special teams in the past has been a unit where rookies and UDFAs were allowed to show their skills. That may not necessarily be the case anymore. The first team unit only has two rookies on it in DeVonte Holloman and J.J. Wilcox, who is alternating snaps as the returner with Dwayne Harris. The unit may not contain any starters right now, but it does contain a number of guys who are the number two guys at their position on the depth chart: James Hanna, Ernie Sims, Sean Lissemore and Kyle Wilber show that the Cowboys are serious about their special teams. As they should be.

There are basically three ways to improve your starting field position: more defensive stops, more takeaways and better returns. In part because they had only 16 takeaways (29th in the league), the Cowboys ranked 27th in average opponent yards per drive, according to Football Outsiders. Their punt return game, thanks in large part to Dwayne Harris, ranked fourth in the league with 12.4 yards per punt return, but the team ranked near the bottom of the league (29th) with a meagre 20.6-yard kickoff return average.

"100 yards of 'hidden yardage' or field position are worth seven points."- Bill Parcells

The Cowboys are working hard in camp to improve their turnover differential, but they are also investing heavily (at least in terms of practice time) on improving their return capability - and their ability to limit the opponent's return capability.

One of Bill Parcells' pet themes was the concept of hidden yardage. Dave transcribed a Parcells press conference in 2006 where Parcells said the following: "McBriar is a field position weapon, he's netting 40 yards a kick. He picks up hidden yards that can lead to points".

According to Parcells, 100 yards of "hidden yardage" or field position are worth seven points (others may use the same formula, he's just the one I associate this with). Jimmy Johnson also had his own theory on hidden yardage, and used to equate a 50 yard advantage in punt/kick return yards to five extra first downs.

Last season, the Cowboys had an average starting field position on offense that was 0.68 yards better than the average starting field position of their opponents. The best team, the 49ers, had a differential of 6.25 yards. That difference of 5.57 yards, multiplied by the Cowboys' 172 drives on offense, would theoretically be an extra 958 yards of hidden yardage. According to Parcells' formula, that would be the equivalent of about 67 extra points. And these are points the Cowboys could have used last year.

If the Cowboy can get even a fraction of those extra points with the help of their special teams unit, the extra effort will have been well worth it.