As the Cowboys complete their preparation for their week 2 matchup with the Kansas City Chiefs, let's look at the scouting report on what to expect from to see from the Chiefs on both sides of the ball.

When you watch the Chiefs play offense, especially from the Cowboys point of view, you see something very familiar. This offense looks like Andy Reid's Eagles teams for the last 14 years. If you want a greater perspective on what a traditional Andy Reid game plan looks like, you can take a look at Matt Bowen's notes from his game prep for a 2005 match up between Bowen's Redskins vs Reid's Eagles. Most of these trends still hold true eight years later. Let's focus on one run scheme, one passing combination on the offensive side of the ball to get an idea of what to watch for.

The Chiefs run game is a combination of the Zone Blocking schemes we see from the Cowboys led by Bill Callahan as well as a lot of gap/angle blocking. The play I want to look at here is a trap play designed to break a big run. 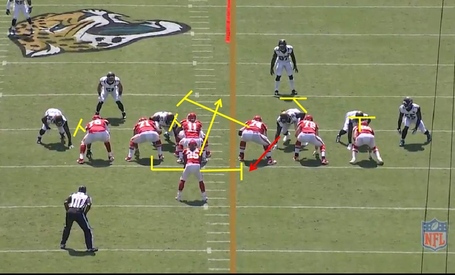 Here we see the Chiefs in 11 Personnel (1 Back, 1 TE, 3 WR) versus the Jaguars in Nickel Personnel (5 DBs) with the safety up in the box.

When we talk about a trap run we are referring to a specific technique by the O-Line. When you trap someone, you give a specific DL (usually a DT) a free run into the back field, by having the OL that would normally block that person immediately reach the second level. You then have someone from the back side of the play come across and trap block the guy getting a free run, allowing your running back to carry the ball "off the butt" of the trapper and through to the second level with two blockers out in front. Here the Chiefs are trapping the 3-technique, with the back side guard.

As you see in Matt Bowen's notes, Andy Reid's offense features traditional West Coast Offense passing concepts. These usually feature inside breaking routes that are QB friendly and want to be completed mostly between the numbers and the hash marks. One of the most basic West Coast combinations is the HiLo Crossers combination. Let's go to the chalk board to see the HiLo Crossers against a 4-man nickel front. 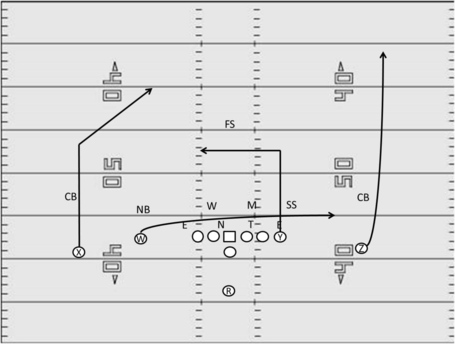 Here we have the Chiefs in 11 Personnel, and I'm putting Dexter McCluster #22 in the slot at the W. You can see the 2 crossing routes which give QB Alex Smith a High-Low read. McCluster is taught to replace the heels of DeMarcus Ware and then work to a depth of about three yards. Some coaches teach this route as one that keeps running regardless of whether he reads a zone or man coverage. This route combined with the "Hunt" route by the TE create the initial read for Smith. The "Hunt" route means exactly what it sounds like. It is basically a "Dig" route but once he makes his cut, he "Hunts" for the first open hole. This combination helps isolate the LB's as the shallow runs in front of their face, and the hunt settles behind them. The shallow cross is also a good weapon vs man coverage especially with a speedy guy like McCluster running it.

The routes on the outside are interchangeable In this case I have the Z running a "Go" route which is a peek read for Smith. He will check the leverage of the CB pre-snap and if he thinks he's got a chance he will peek that way early in his drop and if he's got it he'll take the shot. The X is running a post route, which when combined with the dig or the hunt, puts the single high FS in a bind. If he reads the dig and jumps it, the post will be wide open for a big play.

The route that I've seen Smith throw the most on this type of combination is the shallow cross. It's a relatively easy throw and catch that gets the ball in the hands of a play maker with a chance to make a play.

When you think about this defense, your first thought should be the type of team we have seen from the New York Jets over the last several years under Rex Ryan. Bob Sutton, the defensive coordinator, was the Jet's LB coach prior to coming to KC. He coaches a 3-4 front, that plays a pretty basic 2-gap scheme on early run downs, and moves to multiple fronts, and pressure schemes in passing situations. Let's look at a pressure scheme Sutton used in week 1 by the Chiefs that resulted in a sack on JAX QB Blaine Gabbert. 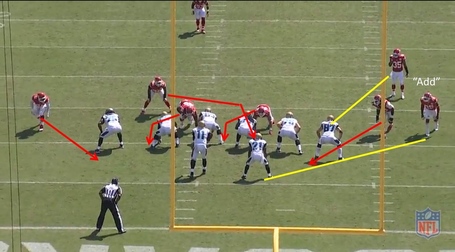 This is a Big Nickel personnel look from the Chiefs with 2 DL, 4 LB, 3 S. and 2 CB, with 2 of the 3 safeties up in the box. This is a "Dog" (5-man pressure) which has the 2 DLinemen angle their rush off to their right by 1 gap, allowing the LB to loop around and attack the B-Gap. Tamba Hali and Justin Houston come hard off the edges (as they do often) and both safeties are in man coverage playing an "Add" technique. This technique puts them in man coverage on a TE or a RB near the core of the formation, and if this person stays in to protect, then the defender will become part of the pressure scheme.

Behind this pressure, the Chiefs played Cover 1 (Man-Free) with single coverage across the board and a free safety in the deep middle.

This game is going to be a tough matchup for the Cowboys, offensive weapons like Jamaal Charles, Dwayne Bowe, and Dexter McCluster, as well as guys on defense like Dontari Poe, Houston, Hali, Eric Berry, Brandon Flowers, and Derrick Johnson, they have guys that can make plays on both sides of the ball, as well as a quality staff put in place by Andy Reid. If the Cowboys can slow down the run game, (or get an early lead) and make Alex Smith beat them through the air, that's a match up I think that's their best chance to win. I expect Lance Dunbar to get in space vs a LB and make a play or two, as well as Dez Bryant finally getting some single coverage as Sutton tries to bring pressure.