One of the key roster questions heading into yesterday's game against the Chiefs centered on Brian Waters: Will he play, won't he play? If he plays, how much will he play?

So let's get that out of the way quickly: Brian Waters played on four series and got 18 of the 64 offensive snaps at right guard. Mackenzie Bernadeau had the remaining 46 snaps. But Waters' snapcount isn't the only one worth looking at. Today we’re going to review the all the snapcounts from Sunday’s game to get a better feel for what is happening all over the roster.

But before you look at the snap count distribution a little further down this post, try to answer the three questions below. You may be surprised by the answers:

Check out the snap distributions below, and let us know what your reactions are in the comments section. We'll get started with the offense:

O-line: Did you see Phil Costa in the game yesterday? I certainly didn't. But he did get one snap in the second drive of the first quarter, though not as an offensive lineman. The screenshot below shows Costa trying to lead DeMarco Murray on a 2nd-and-1 on the Kansas City one-yard line. The play didn't work as planned and Murray lost a yard on the run. 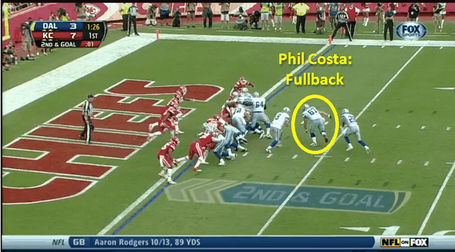 Running Back: Remember when the Cowboys had a running-back-by-committee approach? Those were the days. Today, Murray is hogging the snaps, and Lance Dunbar didn't help his case for more playing time with the fumble. But you've got to wonder whether having Murray out there virtually all the time running head-first into walls of linemen is good for his continued health.

3rd Wide Receiver: Terrance Williams still has the edge over Dwayne Harris, but Harris is up to 11 snaps from four last week, while Williams is down to 26 from the 36 snaps he had against the Giants. Notably absent for the second straight game, and not even on the active list: Cole Beasley

Tight Ends: Hanna had a slight edge last week with 29 snaps to Escobar's 21, yesterday they were dead even with 22 snaps each.

On to the defense:

What stands out the most here is that while the Cowboys had a moderate rotation going along the defensive line, there was none of that in the back seven. Claiborne came in for Durant in nickel packages; everybody else (Lee, Carter, Carr, Scandrick, Church, and Allen) played every single snap.

Remarkably, Nick Hayden played almost all snaps at 1-technique, leaving the field for only seven snaps. Not bad for a guy the Cowboys brought in off the street. Spencer appeared to be still quite rusty at times, but physically he seems fine, as his 34 snaps can attest. Those 34 snaps mean he played slightly over half of all 67 defensive snaps.

On offense, the team wisely sat Romo, who was joined by the four skill guys (Bryant, Austin, Williams and Murray) as well as Leary, Frederick and Bernadeau. Everybody else was in on special teams.

Brandon Carr and Orlando Scandrick played 78 total snaps each, the most of all Cowboys players. This is particularly surprising in Scandricks's case, because somewhere between playing all those snaps, Scandrick found the time to get some stitches for a gash on his chin. Scandrick sustained the injury not while he blocked a kick at the end of the second quarter, but while celebrating the block - when he and Will Allen ran into each other.