There were myriad mistakes made by the Dallas Cowboys during the loss to the Kansas City Chiefs. But one in particular stands out as the most likely moment that the tide changed.

Share All sharing options for: Cowboys @ Chiefs: The Gamechanging Play

You have probably heard about the play. On the opening drive of the third quarter, the Dallas Cowboys had gotten into the red zone against the Kansas City Chiefs. The team had driven very effectively, and it looked like Dez Bryant, who had been on fire in the first quarter, was heating up again, with three receptions for 28 yards on this possession. After a couple of mistakes that pushed the ball back to the 9, the Cowboys faced a third down, and ran a failed screen pass instead of trying to get the ball to a single-covered Bryant.

Everyone who saw the play is pretty much in agreement that it was a mistake. It was so crucial, that I think it swung the momentum and was the point where things started to go downhill towards the eventual 17-16 loss for Dallas. Here is a look at how it came about - and why it should not have happened.

Ironically, just two plays before the missed opportunity to Dez, Tony Romo and DeMarco Murray made a sight adjustment on a play that was exactly what was needed but not done on the screen play. To set the scene, Romo had just been sacked, and it was now 2nd and goal from the 12. In the initial formation, Murray had lined up in the backfield, and them motioned out wide left. Here is what Romo looked up and saw. 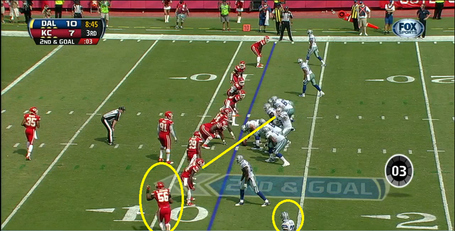 Kansas City's defense was thrown off balance, and Derrick Johnson actually turned and ran away from Murray while signalling that someone needed to come cover him. Romo looked up and saw both Johnson's confusion and Murray signalling a moment later for the ball, and delivered it to Murray for an eight yard gain. Johnson had to reverse back to cover Murray, and if the ball had gotten to him just a split second earlier, this might have gone for a touchdown. But still, it was a quick and effective adjustment to take advantage of an opportunity.

The next play, the Cowboys lined up in the formation for the screen pass. Note that in the picture, the KC defense is pointing to Ronald Leary, who had a false start called on him. However, the key here is that the Cowboys decided to run the same play after the penalty. 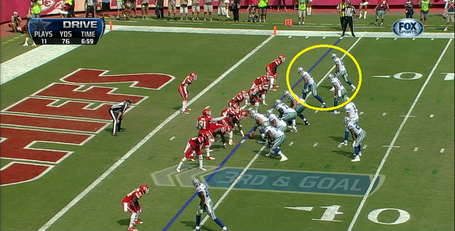 Here they are, with the same alignment. The only real change is that Brandon Flowers, who Bryant was beating like a drum all day long, is now lined up five yards further away. In essence, when everyone else moved back, he just stood in one place. Below is the moment when Bryant realizes that he has all that room to work with, and starts to signal for the ball. Note the time. 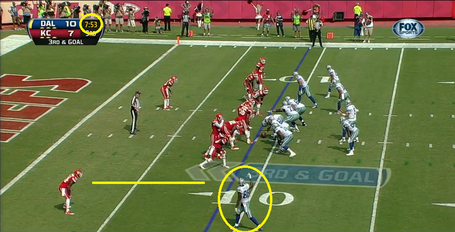 The puzzling thing is that the team is in the same formation as the previous play, and yet there seemed to be some confusion. Romo was yelling at people, and it seems he was trying to hurry things along, while not everyone seemed to realize they were going to run the same play. Twelve seconds tick off, and there is no adjustment by the Chiefs. They still have nine players lined up in the box with one safety five yards deep, all focused on the three receiver bunch, and Bryant is still facing single coverage. He is now waving both hands in the air, but there is no sign that Romo even notices him. 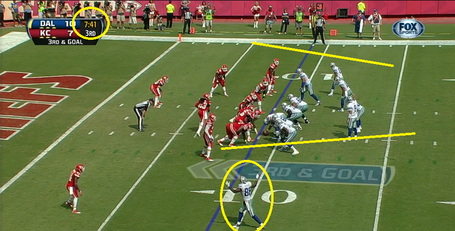 The play, as we all know, was a failure, losing yards and leading to a field goal.

It looks so frustrating, and it certainly appears that Bryant was extremely upset. The bunch formation could have served as the perfect decoy, giving a shot at the high percentage throw to Bryant.

What is hardest to figure out is why, as far as I can see in the video, Romo did not even look over to see what was going on. Did he not realize that he had almost everyone caught up in middle of the field? Was the noise making it difficult? It might also be that the penalty on Leary threw things off and created an unneeded sense of urgency.

Most importantly, why was the team not looking to keep feeding the ball to Bryant? He was far and away the most effective thing the Cowboys had on the field. Yet it seems that someone in the play-calling chain decided to try and exploit the heavy pressure the Chiefs had been bringing. The play that was run was an attempt to outsmart the other side, and in this case, Andy Reid and company wound up being smarter, playing coverage with such a small area to work with. The screen had zero chance of working once they didn't send any blitzers. The only thing that did have a chance was running into the corner of the end zone, ignored by his quarterback.

From that point of the game forward, very little worked well for the Dallas offense. And late in the fourth quarter, when there was a very good opportunity for the Cowboys to retake the lead, it looks like Romo ran out of gas, or pain-killer, and after a very good day passing, suddenly could not complete anything.

The Cowboys had a chance there at the nine yard line to put more space between themselves and the Chiefs, but failed. They were successful at the same thing against the New York Giants, getting up 17 points, and were able to hold on from there and win. The play was a turning point for the game, but it also was a symptom that has shown up far too often the past few seasons. It is a rare thing now when the Cowboys get a big, solid lead on someone that they can ride out. There have been too many last second rallies, both successful and not. As rabblerousr noted in his by the numbers post, this has become the way Dallas operates. And it is far too risky. There were, simply put, (and already mentioned by just about everyone on the BTB staff) too many missed opportunities.

Dallas needs to go out and, if you will pardon my language, lay a couple of good, old-fashioned ass-whuppings on some people. (That's the traditional spelling, not the more recent "whooping".) They need to get back to the idea of jumping on opponents hard and putting the game away early.

The problem is that they almost seem unable to do that. With Dez Bryant going off early, it looked like they could, but the same red zone stalls we have suffered through for years happened, yet again. And then when it really mattered, they decided to move away from the best thing they had going when they needed a score.

When you look at all the numbers and video, you have to start wondering if there is a problem with the mentality of the Cowboys. They almost seem to sabotage their own success. That 17 point lead against the Giants offered a little hope that things might be changing, and the failure in Kansas City dashed those hopes.

It is still very early in the season, the Chiefs were obviously much better than last year, and the crowd noise was reportedly very difficult to deal with. This is not the end. But something needs to give. The gamechangers need to work for the Cowboys, not against them.