The Cowboys are finishing up preparations for their Week 3 battle with the St. Louis Rams. Let's look at a quick scouting report for what we should expect to see from Jeff Fisher's squad.

When the Dallas Cowboys line up to face the St. Louis Rams on Sunday at 1 pm ET, they will face a significant challenge. I am a big fan of the way that Jeff Fisher and the rest of the Rams organization have built their team. As Dawn Macelli addressed earlier this week, young Players like Tavon Austin, Chris Givens, Michael Brockers, Janoris Jenkins and Alec Ogletree are all guys the Cowboys will have to concern themselves with in the game, as well as veterans like Jared Cook, and Cortland Finnegan. But how will they put those guys to use? Let's take a look.

This is an offense that likes to spread a defense out, and with the play-makers they have I can understand why. This scheme is all about trying to get guys in space and create easy throws for QB Sam Bradford with a chance at a big play after the catch.

Let's look at an example of a route Combination that the Rams like to use to get guys like Austin, and Givens open underneath with a chance to make LB's miss and break a big play. 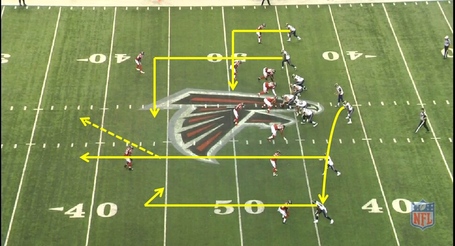 Here we have the Rams in 11 Personnel (1 Back 1 TE 3 WRs) with the TE split from the core in the slot to the top of the screen. The Falcons have countered with Nickel personnel (5 DB's) as is typical vs a 3 WR set. The Rams are aligned in a spread "far" formation with the RB to the weak side (far from the TE).

The concept to the top of the screen is called "Levels" and from the QB's perspective is not terribly different from the "HiLo Opposite" combination we looked at last week when discussing the Kansas City Chiefs.

To the closed (strong) side of the formation is the Level's concept, the inside receiver, in this case Jared Cook, runs a standard "Dig" route, 10-12 yards and an in cut. In fact, in the Peyton Manning/Tom Moore playbook used in Indianapolis all those years, this play is actually called Y-Dig. To the outside, the #1 receiver to the closed side runs a short 5-yard in route. As we work across the formation the Rams have the #2 receiver running a "Seam-Read"(convert to a post if middle of the field is open) and the #1 to that side combining with the RB to form a Curl-Flat combination.

On this play, Bradford counts the number of deep safeties, if he see's 2 deep, at a depth of 12-15 yards (as he does here), he reads high to low, from the Seam-Read, to the Dig, to the short in. and if he see's a single safety high, or 2 safeties at 8-10 yards, he's going to look to work the Curl-Flat combination,again looking from the Seam to the Curl to the flat.

This play is very good for getting guys open underneath with a chance to run, because both inside receivers push the LB's deeper into their drops. As the LBs drop to stay in good position vs the Dig, or the Seam, they vacate a lot of space underneath for the outside guy to run to. Easy throw and catch with YAC (Yards After the Catch) opportunity. This particular instance of this look was completed to Austin Pettis on the short in at about 5 yards down field, and he turned it into an 11-yd gain and a first down.

An additional variation to this play, called Y-Dag by Manning and Moore is something the Rams have used to get TE Jared Cook opportunities down the field. Here's the illustration from the same pre-snap look the Rams showed in our last play. 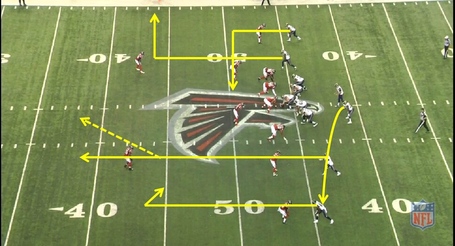 Once teams see the Levels concept many times on tape, and a time or two in the game, the CB to the closed side, as well as the LB to that side are eager to jump down to the short in to make a play. The only change to the scheme offensively, is that when the TE or inside receiver reaches the top of his route, he breaks outside instead of inside. This gives Bradford an easy throw to a big body with leverage on a safety trying to come off the hash who is likely to be leaning inside looking to jump the Dig piece of the Levels look, without any support underneath because the CB and LB are attacking the underneath route. I saw the Rams use this look a couple of times in two games for explosive plays for their TE.

The Rams defense is a unit that plays aggressively and has the ability to make big plays. As we did last week with the Chiefs, lets look at a pressure look, dialed up by defensive coordinator Tim Walton designed to get the ball out of the QB's hands quickly on 3rd down, and allow his team to get off the field.

Here we have the Rams in their Nickel look against Arizona in the shotgun. Cortland Finnegan (31) is the slot CB and Chris Long (91) is the open side defensive end, playing in a 2-point stance in this case. This is a blitz (6 man pressure) with Cover 0 behind it. The goal here is to overload the right side of the Cardinals offensive line with a the Cat (Corner) Blitz, as well as the stunt by the mike LB (55) and the 3 Technique defensive tackle setting up the LB to attack the B Gap. Long and Michael Brockers (playing the shade-nose) have outside contain on the rush, as Brockers and DE Robert Quinn execute a stunt as well.

As you can see, there is a lot for the OL to digest and react to quickly. But ultimately, it is up to the QB to see early that there are four guys coming from a side where he only has three blockers, and get the ball out of his hands.

Many times in the game the Rams will depend on their talented front four to generate pressure, but at other times, Tony Romo and his offensive line will have to be able to handle these types of overload and Cat Pressure schemes.

I said last week that I thought that the Cowboys would have a tough time matching up with the Chiefs, and I ended up being right. This is an instance where even though I predicted on Cowboys Crunchtime with KD that they would lose this game, I think they have a good opportunity here. The Rams have a tendency to give offenses room to work with around the line of scrimmage. Their CB's play off regularly, and even though this puts Janoris Jenkins in position to make plays, it often compromises Finnegan who is at his best when he has his hands on the receiver. This room could prove useful for Dez Bryant, Miles Austin and the rest of the Cowboys weapons as they attempt to get open down field. I also expect to see a very pissed off inspired DeMarco Murray run the ball well against a bit of a lighter front seven from St. Louis. If the Cowboys defense can keep the Rams weapons under wraps and force a turnover or two (or six), I think this team has a chance to be very successful in week 3, and take hold of a decent NFC East lead they failed to claim last week.