In this week's power rankings, the Cowboys are edging closer to the top ten, the Giants and Eagles are trying to reverse their stall as they freefall into the bottom third of the rankings, and the Redskins remain lost somewhere in the backwoods of the power rankings.

In this week's summary rankings, the Cowboys inch closer to the top ten while the Giants drop like Eli Manning in the first quarter against the Panthers. The Redskins are closing in on Jacksonville, and the Eagles are also struggling to stay relevant.

Here's a look at the Dallas Cowboys and NFC East power rankings heading into Week 4 of the 2013 NFL season.

CBSSports.com (Prisco): 9th (13th): "In a bad division, they are the lone team that has a winning record. The defense really impressed against the Rams."

Foxsports: 11th (14th): "If only DeMarco Murray could play the Rams every week… "

CBSSports (Kirwan): 11th (- -): "The NFC east is a mess and the Cowboys can pull away, especially if DeMarco Murray stays healthy."

Peter King: 12th (- -): "The Cowboys are the class of the NFC East by default—though they played well in embarrassing the Rams. DeMarco Murray needs to stay healthy, or the over-reliance on Tony Romo will hurt their chances of playing deep into January."

Drafttek: 12th (14th). "If DeMarco Murray could play against the Rams defense every week, he would have Emmitt Smith's NFL record in his gunsights . . . total defensive domination by the 'Boys today, dare I say it . . . "Doomsday III"???"

NFL.com's Elliott Harrison: 12th (14th). "In honor of what seemed like the 20th anniversary of the Dallas Cowboys actually having a running game, the team decided to run the football, leaving DeMarco Murray breathing heavily, like a boxer worn out from continually punching a guy.

Oh, and before we go, all those USC fans who derided Dallas' decision to hire Monte Kiffin might want to rethink their stance. The Cowboys' defense has been a huge bright spot, ranking second in the NFL in rushing yards allowed (66.3), sacks (13) and opponent time of possession (25:52). The unit is allowing opponents to convert on third down just 29.7 percent of the time (fifth best in the league). "

WEEI.com: 15th (15th): "The NFC East is wide open for the Cowboys to take. They’ve been marred by mediocrity the past two seasons, posting an 8-8 record both years. This could finally be the year when Jason Garrett‘s team takes advantage of its opportunity."

Newsday.com: 15th (15th). "Can’t ask for much more out of the Dallas offense in this one, as DeMarco Murray gets his first 100-yard rushing game in nearly a year, and Tony Romo throws three TDs in a romp over the Rams. "

Shutdown Corner: 14th (13th): "We all expect that somehow the Cowboys' coaching staff will totally forget all about the running game again this week, right? Old habits die hard."

ProFootballTalk: 14th (16th): "At least we’ve determined Tony Romo knows how to hand the ball off like Peyton Manning."

Covers.com: 6th (9th). "Dallas spent the first two weeks of the season struggling to run the football, but DeMarco Murray broke out with a 175 yard rushing effort against the Rams last week."

WhatIfSports.com: 7th (14th). These guys simulate every possible match-up in the NFL 100 times, and use the winning percentages from those nearly 50,000 games to evaluate every team, with updated rosters and depth charts.

Sagarin NFL rankings: 7th (- -). These are rankings based on W/L record, points differential and schedule strength.

Massey-Peabody: 8th (17th). These guys generate their predictions by working up from play-by-play data to calculate a performance figure for rushing, passing, scoring and play success.

BeatGraphs.com: 10th. BeatGraphs provide rankings that cannot be defeated by a chain of A beat B beat C scenarios. In the end, when all ambiguity is removed, if A has beaten B, A will be ranked above B. Here's a sampling of their fine handywork: 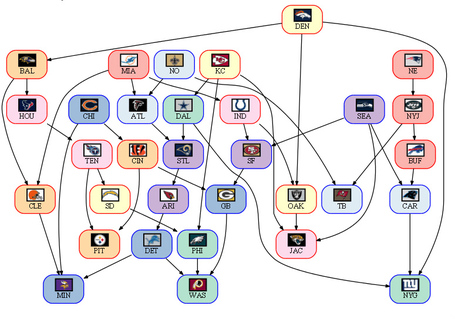 This is just one of the many cool graphs they produce, and not just for the NFL, so go pay them a visit.

Oddsshark: 10th (12th). Oddsshark use a multitude of stats to establish an offensive and defensive power ranking, which they then adjust for the strength of schedule.

Football Outsiders: 14th (21st). FO have the Cowboys with the 17th-ranked offense, the 11th-ranked defense and the 15th-ranked special teams.

Teamrankings.com: 17th (24th). This site measures the relative strength of all teams using team performance, home/away status, margin of victory and other factors.

The table below summarizes the power rankings for the four NFC East teams, as well as the Cowboys' next opponent, the San Diego Chargers. We will update the remaining power rankings when they are published.