The most expensive NFL game of the weekend is Philadelphia at Denver with a median ticket price of $278, according to Vivid Seats, a secondary-ticket marketplace. It is also expected to be the highest scoring game of the week: the over/under has been set at 58 as the high-powered Broncos offense meets a porous Eagles defense.

The second most expensive game is the Vikings-Steelers matchup in London's Wembley Stadium (currently going at the second highest median price of $218), though if you were to add travel costs to and from London it would be the most expensive game. Not bad for two teams that have combined for a 0-6 record so far this year.

The Cowboys-Chargers game has the 3rd highest median ticket price of the week at $185 as SoCal residents flock to see America's Team.

The cheapest games of the week can be found in Florida, where the Jaguars host the Colts and the Buccaneers await the Cardinals. Both games have a median asking price of just $54. 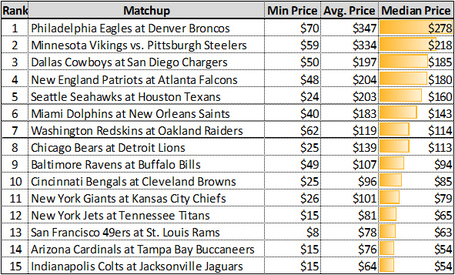 The last time the Cowboys and Chargers met in a regular season game in San Diego was in 2005, when the Cowboys beat the Chargers 28-24. At the time, Dallas QB Drew Bledsoe passed for 226 yards and 3 TDs while WR Keyshawn Johnson had 5 catches for 65 yards & 2 TDs.

Some player highlights as the Cowboys head to San Diego: