As the Cowboys complete their preparation for their Week 4 match up with the San Diego Chargers, let's look at a few things we should expect to see from Mike McCoy's team on Sunday.

When I watch the San Diego Chargers play, I honestly don't come away terribly impressed. They are playing well on offense, but they aren't very explosive, and defensively, they look pretty slow in their 3-4 scheme. Only Dwight Freeney and Eric Weddle look like impact guys on that side of the ball. A lot of people are talking about this being a close game and we know that historically the Cowboys have been prone to play down to their opponents in situations like this one, but if the Cowboys play well, I don't see this game being too close.

There has been a good amount of discussion this week about how Phillip Rivers is getting the ball out of his hands a lot quicker this year than he has in years past, and that he's making fewer mistakes. When I watch them play, I still see 5-step drops and routes down field, but you do see him more willing to check the ball down sooner and get the ball in the hands of guys like Danny Woodhead and Antonio Gates underneath. Let's look at a couple of ways the Chargers have attacked through the air in the red zone. 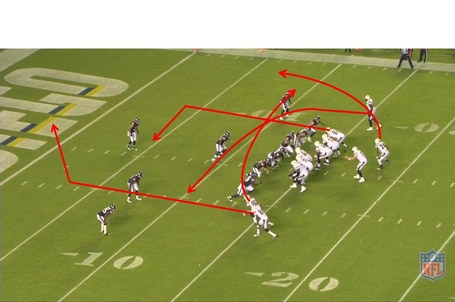 Here we see the Chargers in 12 personnel, with Antonio Gates split to the top of the screen. He is finishing up a "divide" motion bringing him in towards the core of the formation. This concept is called the "Mesh" and centers around the short crossing routes run by Gates and the near side slot. In this combination, Gates "sets the mesh" at a depth of about 6 yards, and the slot WR runs underneath him. These guys follow the normal sit vs zone, run vs man rules, the dig route by the TE creates the High-Low read we've discussed before.

The interesting piece of this play, is the wheel route run by Ryan Matthews out of the backfield and the post route by the #1 WR to the near side. These are likely "tagged"(added) to the base Mesh Concept which would feature a corner route (WR) and a flat route (RB). The post keeps the safeties in the middle of the field which helps the RB end up in a man situation on the outside vs a linebacker who is likely not accustomed to playing coverage in that much space down field.

This particular play was a pretty easy throw and catch for a quick touchdown and early lead vs the Houston Texans.

Before I move to a different aspect of the game I want to look at one more piece of the San Diego offense that I will be on the look out for, as I'm sure Jason Garrett, Monte Kiffin, and Jerome Henderson will as well, and that is the pick play. Mike McCoy loves to have his players on the outside set picks for one another to spring a guy open. 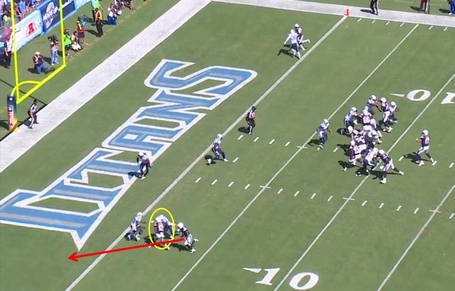 Here we see that the outside receiver (circled in yellow) has run his "Pick" route. This is usually a slant or a short in route on which the WR will set his depth and path in order to run into the defender covering the slot receiver who is running a fade or a wheel. San Diego's receivers will run this route and just before making contact with the defender they will spin around to make the contact look incidental. I'm sure that Jason Garrett will mention this to the officials before kickoff on Sunday afternoon and let them know about it even more if a call is missed. As for the play above, the Chargers were flagged for offensive pass Interference because of the illegal pick.

When you watch the Chargers play you see a mixture of run schemes, however the draw plays, as well as the gap/power blocking schemes are most prevalent. Lets take a look at a wrinkle that the Chargers like to run in this piece of the game plan. 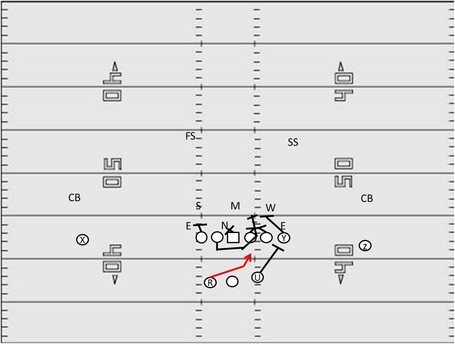 This is a variation on the base "Power" blocking scheme that every team in the NFL, and almost every college, and high school team has in the play book. = The keys here are the down blocks by the front side point of attack players, combined with the kick out block on the end man on the line of scrimmage by the 2nd TE or the full back, and the pull from the back side guard to provide a lead blocker. The theory is that by adding an additional blocker to the front side of the play you're creating additional gaps for the defense to cover and they don't have the numbers to cover those gaps, so unless someone misses a block or a defender makes a great play, you've got an opportunity for a solid gain.

The twist here is the Chargers running this from the gun look that they play a ton of snaps from. This is also a play they like to start a series with, especially down in their own territory. If you see 2-deep safeties on 1st and 10, early in a series in SD territory, you should be looking for this play, because I'd bet that's what Sean Lee, Bruce Carter and Barry Church are looking for.

Now let's look at another twist on this power scheme, that I saw the Chargers use to keep defenses from loading up the front side. 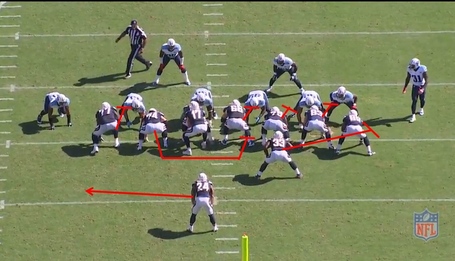 Here we see the Chargers creating a full flow to the offenses' right hand side, complete with a pull from the LG and a kick out from the fullback, however rather than running the power play, Ryan Matthews takes off quickly to his left and gets a quick pitch from Rivers to try to spring him off the edge. This is a play I would be cautious of in short yardage and goal line situations from San Diego this week.

Chargers' defensive coordinator John Pagano runs a defense that over all I am not terribly impressed by. A few weeks ago when I watched the Chiefs play their 3-4 front I was worried about the ability of the guys in their front seven and the Cowboys ability to get them blocked. Watching the Chargers, I don't feel that same anxiety. The only real impact player in the front to me is Dwight Freeney who is in his second year ever playing a stand up 3-4 OLB as opposed to a 4-3 DE similar to the role of DeMarcus Ware in Dallas. However, in nickel situations, Freeney gets to put his hand on the ground and do what he still does best, get after the QB. You still see him play with explosiveness and some power, as well as his famous inside spin move. Pagano knows he doesn't have many players with a ton of ability to the QB so he does some things up front to attempt to generate pressure on opposing QBs.

Let's look at an example or two to get an idea. 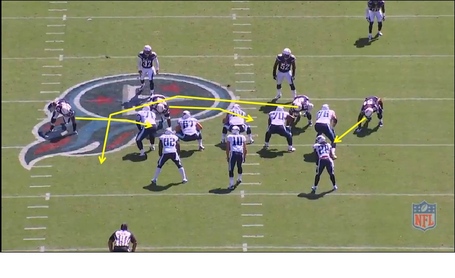 Here we see a 4-man rush from the Chargers sub package feature in 4 down guys, 1 true LB, 3 CB's and 3 S's. In this rush we see a line game, in which both the closed (strong) side 3 technique, and DE take long scoops inside, going 2 gaps away, and the back side 3 technique loops all the way around in attempt to get a late clear run at the QB. I saw them run this type of game several times, and I don't remember them getting home, or getting any significant pressure as it takes along time for a lumbering DT to make his large loop around to really be involved in the pass rush. 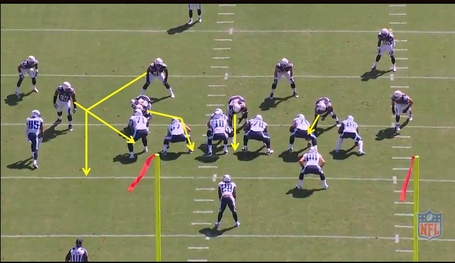 Here we see Pagano dialing up a 5-man dog pressure from San Diego's base 3-4 personnel. Here the open DE scoops inside 1 gap, and the OLB attacks the inside shoulder of the OT, allowing the LB to loop around him and generate instant pressure.

As I said above I don't think these teams are as closely matched as many people want to give them both credit for. I'm very aware of the 8-8 nature not only of recent Cowboys years, but the entire league as well, and I'm not normally one to predict a big time win by 2+ scores on the road, but that is really how I feel this game is going to play out.

The injuries on the San Diego offensive line will start to catch up with them against Marinelli and his rush men, and good ole Long Arms will give you some numbers vs a back up LT, and a rookie RT, creating the perfect atmosphere to try to help move them along quickly.