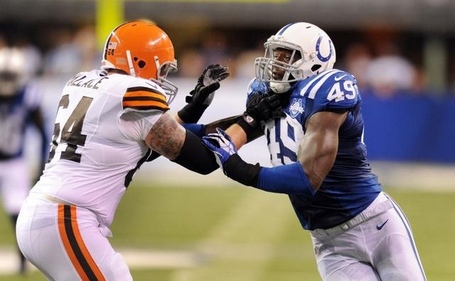 Rookie Caesar Rayford will be switching to a much better shade of blue now that he has joined the Dallas Cowboys.

In a move to bring the Cowboys roster up to 53 players, the Dallas Cowboys have traded an undisclosed draft pick to the Indianapolis Colts for defensive end Caesar Rayford. Nick Eatman confirms:

Originally signing with the Detroit Lions in 2008, Rayford did not make the team as an UDFA. Since that point Caesar has bounced his way around football over the past few years, starting with the CFL's B C Lions practice squad. Moving on, Rayford joined the Arena Football League as a member of the Utah Blaze, where he and his fellow defensive linemen were known as "Sack Lake City". In 2012 they set an AFL record for 11 sacks in one game against the Iowa Barnstormers. Rayford lead that effort with 3.5 sacks. It was enough to once again earn him some attention from NFL teams. In May, Caesar Rayford signed with the Indianapolis Colts.

As a Colt, he lead the NFL with five sacks during the preseason. The Colts also viewed him as an intriguing possibility for special teams. Both his ability as a dedicated pass rusher and as a special teams guy should serve him well in Dallas. One other thing that appeals to the Cowboys staff is that, like everyone that has been added recently, Caesar Rayford is the "right kind of guy". From an interview with the Indianapolis Star we have this quote:

Surviving Saturday enables Rayford to finally embrace a dream he’s been chasing since he was a budding prep standout in Spanaway, Wash."It’s just a passion I’ve had," he said. "I love football. I love being around football. I have the passion to prove myself, to prove that I belong and that I can play at this level."

It sounds to me like young Mr. Rayford may have a little bit of Garrett blood flowing through his veins.