Throughout the season, I'll spend time watching film for the Cowboys' upcoming opponents and trying to put together some mini-game plans. Let's take our first look at the New York Giants.

The season opening version of this series is a little light, and slightly different than I envision for the rest of the season, but I appreciate you guys bearing with me this week, I'm writing this from a sofa bed in a hospital room, as my wife sleeps soundly after giving birth to our son less than 48 hours ago. (He'll be in the film room with me soon, we start learning coverages next week, and we'll start working on his footwork around thanksgiving.)

For my study of the Giants, I focused on two games from 2012, first was their Week 10 matchup against the Cincinnati Bengals, and second was the Week 8 nail biter against your Dallas Cowboys.

I want to use this week's iteration to take a look at a way the Giants have used to attack defenses deep down the middle of the field to pick up explosive plays. The particular play I will outline comes from the first quarter of the Cowboys/Giants match up in Week 8 that gained 56 yards and got the Giants off to a good start from an offensive perspective. 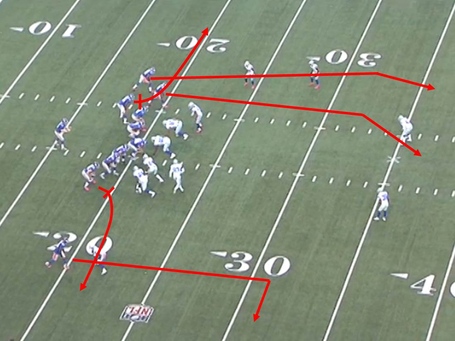 We can see the formation pre-snap, with the Bunch set to the top of the screen, and the scheme from the Giants. The coverage from Dallas is Cover 6, or Quarter-Quarter-Half, which is really a combination of 2 other coverages. To one side of the formation the defense plays essentially Cover 2 (press and bail corner, deep half safety etc) and the other side of the formation plays Cover 4 or Quarters coverage ( 4 deep 3 under coverage) where the Safety and the outside CB each play 1 quarter of the deep area of the field with the OLB, or Nickel player in an underneath zone. You can see it on the chalkboard here, we will likely see this coverage with some regularity from the Cowboys' defense in 2013, including Sunday vs the New York Giants.

Looking at the formation, you can see that both the Nickel CB and the Outside CB are playing with hard outside leverage, and the Giants are going to attack the deep middle of the field against that outside leverage. 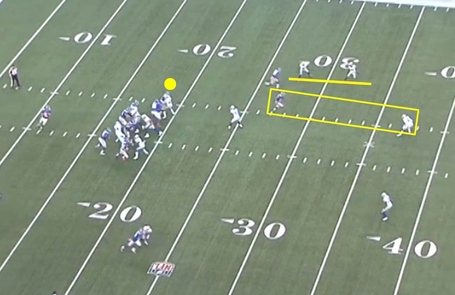 A couple of steps into the play we can see the routes and coverage developing. The yellow dot represents the starting point for the outside WR in the bunch set. He has already gained a couple of yards of width towards the sideline, eating up the cushion and leverage of the Nickel, and CB, while the slot guy Victor Cruz is attacking directly up the hash. 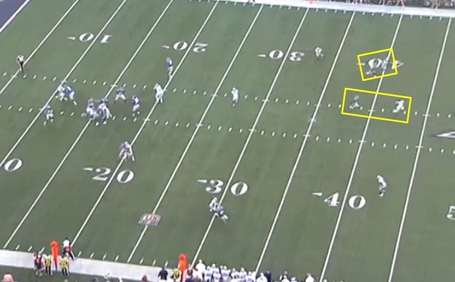 Now we see that once the outside WR to the topside has continued his path vertically, the slot CB has passed him off to the CB in his deep quarter, and the slot guy has the safety (Sensabaugh) turned around because of the threat to attack straight up the seam. We also see that in the backfield, while Eli Manning was pushed off of his spot in the pocket by outside pressure, he has managed to find a spot to set and throw deep. In this case, the ball is going to the outside WR running his post route. At first glance it appears as though Manning is making a mistake based on the positioning of the nearest defenders, however, based on the pre-snap alignments, as well as the movement of the safeties at the snap, combined with the backside routes, Manning knows that the opposite side safety is in position to make a play if the ball is thrown to the inside guy. Instead, the purpose of the inside post is to run the safety, whether in Cover 6 as above, or as a single high guy in Cover 3 off his spot, to take advantage of the outside leverage by the CB. 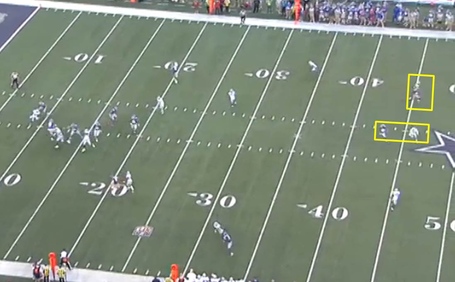 Now the ball is in the air, as Eli throws to his receiver into space away from the CB's leverage and behind the safety chasing the slot's post route. The throw wasn't a great one and it became somewhat of a 50/50 ball, which was caught for a 56 yard gain. But we see the scheme and the way the Giants used scheme to attack the deep middle early in their game plan.

The Giants have been attacking down the field often in the pre-season, and this scheme is something that I would bet we will see them use to try to pick up some chunk yardage against the single high looks from the Cowboy's Monte Kiffin led defense, as well as the Cover 6 looks they'll play in situations.

Additional Side Note: You will hear Eli yell "OMAHA, OMAHA" a lot pre-snap in the game. This is a signal to his team mates, used when the play-clock is running out, that all called motions, shifts, or hard counts are off, and the snap will come on the next signal.