Freeze Frames: One Last Look Back At The Preseason

In this delayed release of Freeze Frames, we examine plays from the preseason 'dress rehearsal' game against the Bengals, focusing on themes requested on Twitter.

Share All sharing options for: Freeze Frames: One Last Look Back At The Preseason

Those who follow me have likely noticed that I'm not an incredibly frequent user of Twitter. Recently, however, I asked my followers for areas to focus on during my evaluation of the Bengals game. This film analysis will focus on those requests.

The first request was simple.

@CotySaxmanBTB the DWare offside call in slo mo looked like great timing by Ware. Would be cool to verify that as a side note.

Thus, we turn our attention to the dubious offsides call (or, perhaps, to an indication of our Cowboys' bias). 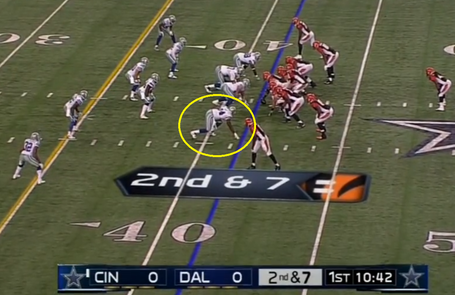 Here we see Ware lined up in his three-point stance. His stance is noticeably different from the other rushmen; Ware is stretched out, knees cocked, like a sprinter, taking up nearly two yards from toe to fingertip, while the other rushmen are more compact and squatty, with stances that resemble those taken by offensive linemen.

Of note here is that Ware is clearly behind the line of scrimmage. His fingers are touching the superimposed blue line, but he is behind the ball and therefore lined up legally. 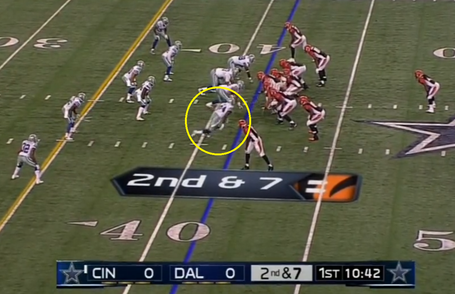 Find the differences between the two pictures. There are two: the ball has been snapped, and DeMarcus Ware has fired out of his stance. Every other player on the field, offense and defense, appears to be in the same position as before.

And, of course, his body is still entirely behind the line of scrimmage.

This play clearly illustrates the concept of Ware being called for offsides simply for being fast. He isn't jumping early, but rather he's more-on-time than everyone else. Ware certainly appears to have super-human reflexes on this particular play, and it's a shame that he's being penalized for it.

For your viewing pleasure, I've combined the two above photos into a GIF.

Full disclosure: There was significant camera movement between the two frames, so I used Photoshop to re-align the perspective for ease of viewing.

Funny how a mundane penalty can turn out to be a highlight play.

Moving on, our next tweeter offered up a series of suggestions: 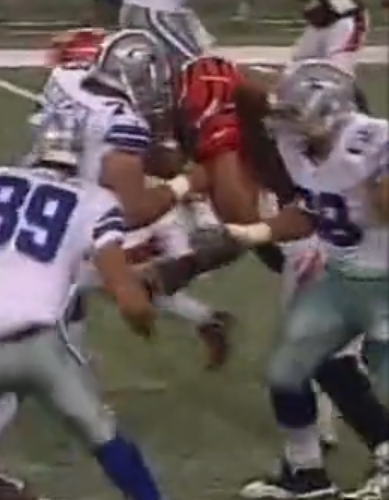 Our first play sees Frederick engaged with Domata Peko, a very large defensive tackle with enough power to give most centers fits. 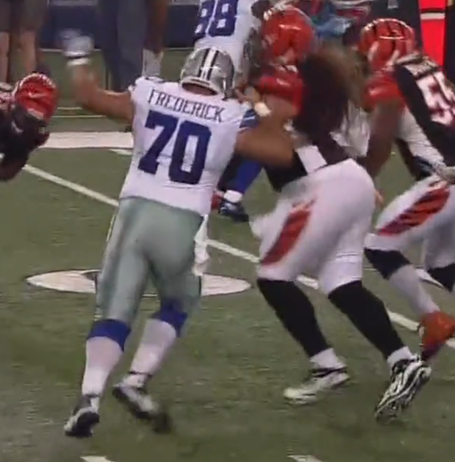 Despite the disadvantageous position, Frederick is able to get a nice push on the clearly larger Samoan opponent.

The Cowboys have long been wanting a center with the power required to relocate opposing 1-techniques, and Frederick appears to be that guy. This particular play allowed DeMarco Murray a place to run before coughing up the football and earning himself a seat on the bench.

This play was typical of Frederick's performance on the night, as he provided solid protection as well as some push in the run game; he essentially looks like an above-average NFL starting center, and that's wonderful at this point in his young career.

As for the young linebackers, well, all save for Holloman have been cut. A quick look at Holloman wouldn't hurt, though, would it?

We see Holloman circled here in coverage in the redzone. Holloman's stood out in coverage, which is a pleasant surprise given his initial post-draft projection as a 2-down linebacker.

In this defense, however, even a 2-down linebacker needs to excel in coverage in order to keep the zones tight and force opposing offenses to earn their yards. For a 'bend-but-don't-break' defense, as ours is often called, our linebackers have done a mighty fine job of minimizing the bending. And we've yet to break.

Come to think of it, I believe the linebackers in this scheme are truly the keys to huge success. The rushmen, we know, can leave running lanes open on their way to the quarterback, and the linebackers, being in zone coverage, are often moving backward or laterally at the snap. It takes a special athlete to diagnose the run, change direction, and fill the hole for a minimal gain. Our linebackers have been so adept at this that they've even been making plays behind the line against the run. It's truly beautiful.

But back to Holloman's coverage. He's facing a tight end (Jermaine Gresham, who happens to be one of the good ones in the league) stacked behind AJ Green. Green's route, and the corner covering it, are theoretically going to pick Holloman out of the play allowing Gresham open space in the flat, and only the safety to beat for the touchdown. 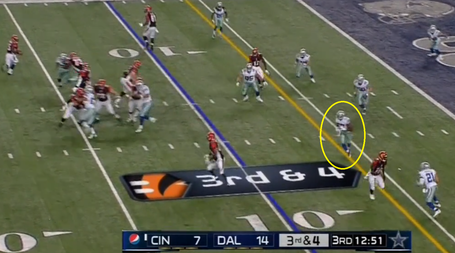 It's third down, so Holloman plays his zone at the depth of the line to gain. He's locked in on Gresham, who has already turned to look for the ball, which Dalton has just released in this image.

If this were a man coverage scheme, like we've had in Dallas in years past, the stacked receivers against inexperienced coverage (Gresham and Green against DeVonte Holloman and Sterling Moore) would've caused some serious concern. However, with the zone coverage scheme and high discipline, both players confidently played their responsibilities and responded to what came their way.

Holloman's set himself up for a nice play. 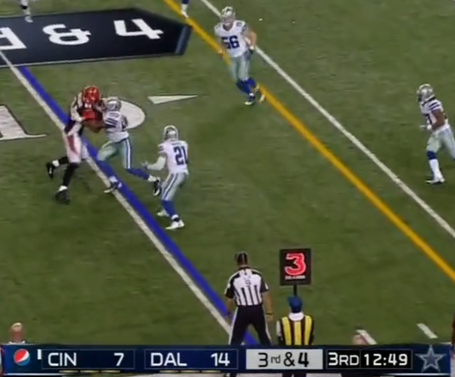 From the last still, you might have expected, or even wanted, Holloman to bring the wood and level Gresham.

Reconsider the game situation: It's third down in the red zone. A big hit would save perhaps a single yard, but the Bengals would still have a chip shot field goal opportunity on the next down.

Holloman makes another smart play, standing up Gresham while his teammates close in to attempt to strip the ball. A quick whistle pre-empts any would-be fumble, but if these players habitually swarm the ball in these appropriate situations, good things are likely to follow.

Carlos, who requested the above two reviews, also requested a look at the safeties. Honestly, however, safety play is very tough to illustrate without All-22 film, which isn't available in the preseason. Besides that, I really want to get to my last object of investigation for this game...

@CotySaxmanBTB I wouldn't object to a close look at that 88 guy. He might make something of himself in the league.

We'll take a look at a play in which our new-favorite-number-88 is defended by Leon Hall. 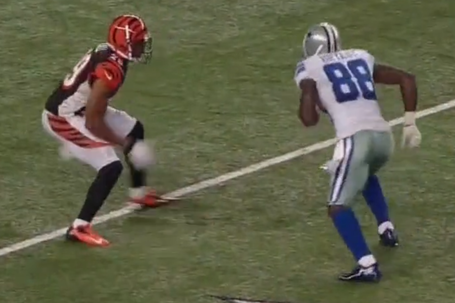 The still here is captured when Bryant is taking an inside step in order to attempt to run around Hall vertically - or at least that's what Bryant is trying to sell.

Hall, one of the better cover corners in the AFC, is in good position to defend the vertical route, and also jump short hitches and outs. The only route he isn't quite ready for is the slant, but the linebackers in that Zimmer defense would be waiting to put a big hit on Dez if the slant was called in this situation. 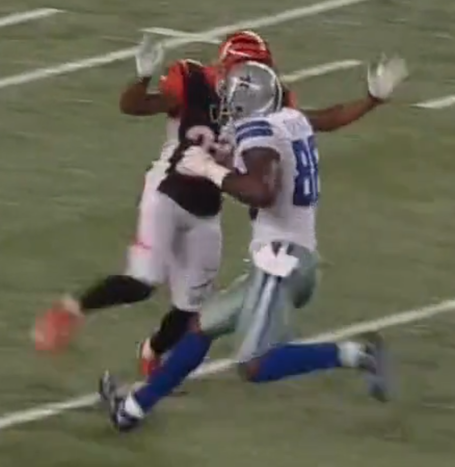 Hall sees a vertical route coming and attempts to get in the way, in order to disrupt the route through 'incidental contact.' Corners league-wide will learn this year that 'incidental contact' down the field is not an advisable strategy when competing with Dez Bryant.

As you can see when looking closely, not only has Dez begun to drop his hips in order to make his break (while still in full stride), but he's also placed his right hand on Hall's chest rather discretely. This is why you don't want contact with Dez; he's become a crafty veteran receiver, never mind his physical gifts. 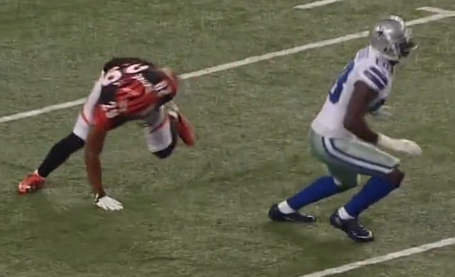 A stiff shove knocks Hall nearly off his feet. The clean break compounds the advantage for Dez and he secures an easy catch as Hall stumbles after him.

Bryant demonstrated in this game that he is capable of dominating against what is supposed to be one of the better cornerback crews in the NFL (Leon Hall, Terrance Newman, and Dre Kirkpatrick). I don't think that changes in the slightest against the likes of the New York Giants, or anyone else in the NFC East, for that matter.

So we've taken a look at three Cowboys executing against the Bengals' corners, defensive tackles, and tight ends; I believe the Bengals are better than the New York Giants at all three of those positions, and posit that the Cowboys will have similar, or greater, success come Sunday night.