The first weekend of the NFL playoffs is in the books.

Share All sharing options for: NFL Playoffs 2014: Divisional Round Schedule

While it was sad to watch the NFL playoffs proceed once again without the participation of the Dallas Cowboys, the games that were played were pretty amazing. Two games came down to field goals with time expiring deciding the winner and another had the second biggest comeback ever in NFL playoff history.

The first game, the Colts against the Chiefs, was an epic game. Either the Chiefs blew a 28-point lead, or the Colts overcame a 28-point deficit depending on how you look at it, either way it was exciting to watch (unless you are a Chiefs fan). The second game on Saturday was a pleasurable experience for most Cowboys fans as the Eagles lost to the Saints at the last second. The early game on Sunday was the odd-game out since it wasn't really that close with the Chargers cruising past the Bengals. The finale of the first weekend was a win as time expired for the 49ers over the packers.

Next weekend it happens all over again. Here is the schedule: 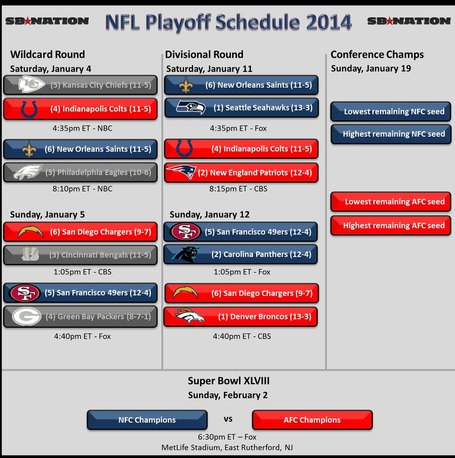