Over the years, I've written so many posts on passer rating differential that I haven't really talked about the subject much this season as I didn't want to sound like a broken record. Here are some previous posts on the topic: 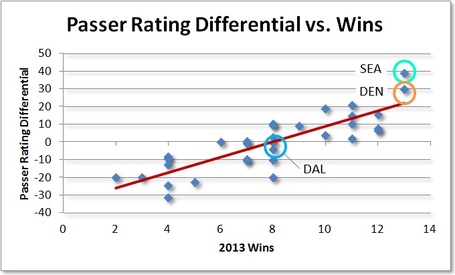 By themselves, offensive and defensive passer ratings had an "okay-ish" correlation with wins (0.42 and 0.41) in 2013. But combining the two into a passer rating differential is like switching on a stat turbo that drives the correlation up to 0.71. The differential works so well because it effectively tells you how much more effective a team is at passing the ball relative to its opponents.

You can see this "turbo effect" with almost every stat you look at. Here's an overview of some stats we've used in the past and what their correlation to wins in 2013 looked like. The table features the differential, the value for the offense only, and the value for the defense only.

When all is said and done, PRD may just be the Robitussin of stats (no matter what you've got, Robitussin better handle it). PRD beats almost any other available stats in terms of how closely it correlates to wins in the NFL. It follows that as a team, you should do everything you can to improve your passer rating differential, no?

The regression formula suggests that to reach 10 wins, the Cowboys would need a PRD of 13. Assuming the offensive passer rating remains constant at 98.7, that in turn would require the defensive passer rating to drop to 85.7, an improvement of 8.5 points. Of course, the Cowboys could also look to get that 8.5-point improvement on offense. And even though they are already one of the top teams on offense, they may have no choice, given the state of their defense.

There is little doubt that the Cowboys will need to improve their PRD if they want to reach the postseason. The question is, do you look for an improved PRD on offense or on defense, where an improved passing defense would require either an improved pass rush or an improved secondary (or perhaps both)?