Can the Giants Slow Down Murray? SportsonEarth
The Giants will have to make a tough choice Sunday, writes Ross Tucker. They can either stack the box and try to contain DeMarco Murray, leaving them vulnerable against the pass. Or they can shore up their raggedy secondary with an extra man and risk Murray running all over them.

It's really not a great choice either way, and Amukamara's injury really compounds the problem. The Giants can keep two safeties deep to prevent the big passing play and get bludgeoned in the run game, dying a slow death. Or they can insert the extra defender on every play and take their chances in coverage. It's not a pleasant choice for Giants defensive coordinator Perry Fewell to have to make, but when you are down a cover guy and have the worst run defense in the NFL, the options aren't going to be great.

The Cowboys are second in the NFL rushing for over 150 yards per game while the Giants limp into this game with the worst run defense in the league. So how will they be able to contend with DeMarco Murray? Risk getting burned by Tony Romo.

"Tony Romo always brings his 'A' game when he plays us." - Newsday
Tony Romo has a passer rating of 107.2, the second best in the league behind only Aaron Rodgers. And despite the broken bones in Romo's back, Giants safety Antrel Rolle expects more of the same.

"He played a good game against us," Rolle said. "He was very poised in his decision-making. He was accurate for the most part of the game. A lot of it came on us not making plays when the opportunity presented itself. Some busted coverages. But Tony Romo always brings his 'A' game when he plays us."

"Tony Romo is a competitor," Rolle said. "He is a tough guy. He went out there and he played a very good game against Jacksonville. Tony Romo loves to extend the pocket and he is very athletic. He knows how to make guys miss and he throws very well on the move. You have to stay disciplined, stay in your coverage and play until the whistle is blown."

"We understand what we need to do to play well," Witten said. "We know what our strengths are, the things that we do well look good in cold weather, being able to run the ball and the play-action game and getting everybody healthy. Philadelphia’s good, New York’s good, whoever we play after that, they’re going to be good."

And the weather may not be as much of a factor as had been initially anticipated. 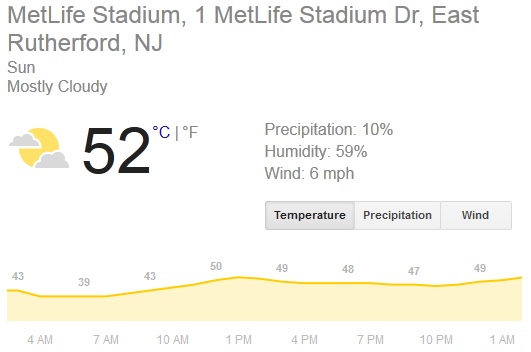 Memo to Giants fans: Expect a flood of Cowboys jerseys at MetLife Stadium on Sunday night | NJ.com
"They don't call the Cowboys 'America's Team' for nothing," Nick Powell writes and explains how prices for Giants-Cowboys are soaring as the Cowboys re-establish themselves as one of the hottest tickets in the NFL, which in turn means Cowboys fans will turn out strong for today's game in New Jersey.

Struggling Giants have lost their winning ways | Bob Sturm, DMN
As Sturm reviews the Giants, he sees a team that has moved away from its winning formula, with little hope on the horizon:

They are not winning games the way successful Giants teams have done, and therefore are on the brink of missing the playoffs for the fifth time in six years. This fact goes largely unnoticed because they have also won two Super Bowls in eight seasons. Feast or famine has been the theme under Tom Coughlin and Eli Manning, with no sign of the drought ending soon.

Week 12 Critical Match-Up: Good Eli vs. Bad Eli - Big Blue View
If the Giants want to win their game against the Dallas Cowboys, Eli Manning is going to have to defeat his mortal enemy: Bad Eli

Why Garrett's 'process' has finally resulted in progress for Cowboys | Rainer Sabin, DMN
Sabin offers a lengthy article in which he reflects on the changes that have taken place in Dallas since Garrett took over and the "glacial pace" at which these changes have happened.

Rather than tear down the team and start from scratch, Garrett and upper management chose to gradually restructure the roster and position the Cowboys to win each year. It proved to be delicate a balancing act, and it’s no wonder the Cowboys finished 8-8 each season from 2011 to 2013.

Before this season, the Cowboys struggled to establish a clear identity under Garrett [...] Now, it’s no longer a mystery. They want to play a physical brand of football while stinging opponents with a balanced offense and a defense that attacks in waves.

Offensive line key to Cowboys’ success | New York Post
The New York Post makes it sound like they Cowboys actually had a plan when they drafted three offensive linemen in a four-year span in the first round of the draft.

Despite extensive quotes from Jason Garrett supporting their hypothesis, we of course know that the Cowboys GM is much more interested in promoting boxing fights and selling tickets than in putting together a winning team.

Philly.com told us so.

I don't think so. I know he has said he believes this is one of the best coaching staffs the Cowboys have had in his tenure as owner, but I think there are prices that might be too expensive. And there is another thing to remember: The coaches will be free to sign elsewhere. Despite the happy faces that have been put on the situation, Callahan was upset he was not able to leave in the offeason when Scott Linehan took over as the playcaller. Callahan wants to call plays and will not get that chance here. Maybe another team gives him that shot and he chooses to leave.

If Callahan leaves, then the Cowboys can plug in Frank Pollack as line coach. Marinelli's situation is tricky too. He is best friends with Lovie Smith. Things have not gone well for Smith in Tampa Bay and maybe he calls on Marinelli, who has displayed loyalty to Smith in the past by leaving the Bears. The Cowboys don't want to lose either coach, but they might not be in position to do much about it.