BIG W for Big D - CBSSports.com
The Giants' Odell Beckham makes the play of the night, but it's Tony Romo (4 TDs) and the Cowboys who come back for the 31-28 victory.

Cowlishaw: The Giants might be heroes, but Cowboys are winners | Dallas Morning News
Cowlishaw focuses his game summary on how the Cowboys were able to move past the first half offensive fireworks from the Giants and prevail for the win.

But as the game wore on, the Cowboys found at least some answers to Beckham — mostly in terms of the pressure they turned up on Manning — and the rookie caught just two balls for 21 yards after halftime.

That left the heroics to Bryant, to Beasley and the gimpy 34-year-old quarterback who can still maneuver his way around a field and a clock that's winding down.

Tony Romo, Offensive Line Dominate When It Matters Most In 31-28 Win - Blogging The Boys
The Dallas Cowboys turned to Tony Romo with the game on the line Sunday night, and just as he's done many times before, he lead his team back to a huge win.

NFL Grades Week 12: Cowboys O-line dominates - CBSSports.com
This game summary focuses on the stellar job of the O-line. Or as Cris Collinsworth said: "Eli is probably saying, 'Can I borrow your offensive line for this drive?'"

There's a reason Tony Romo, Dez Bryant and DeMarco Murray have been buying presents for the Cowboys offensive line all season and it was on display against the Giants. The Dallas O-line paved the way for Murray's 121 yards and on several occasions, gave Romo over five seconds to throw the ball. Romo threw four touchdown passes and Bryant was happy because he caught two of them.

That's my wide receiver - NFL.com
NFL.com leads with this headline on its game summary that focuses Tony Romo's late touchdown to Dez Bryant which gave the Cowboys the lead and eventual win on Sunday.

Another late win for Tony Romo. The numbers really belie his reputation. Romo's clutch work Sunday night bumped his career total of game-winning drives (fourth quarter or overtime) up to 27.

Has Romo had his share of hiccups along the way? No question. From his infamous botched-snap playoff fumble in Seattle to three straight seasons with 8-8 finishes, Romo often makes it difficult to stand fully behind him as one of the best quarterbacks in the NFL.

But the truth is that, well, he is.

Sunday Night wrap-up: Cowboys pound out another win up front | ProFootballTalk
In a remarkably snark-free game summary, PFT credits the Cowboys' O-line for allowing the Cowboys to maul their way over the Giants.

While their image is built on style over substance in past years, they’ve built an offensive line with three first-round picks, and that lends itself to being slump-proof. By locking up left tackle Tyron Smith and using their first-rounder on guard Zack Martin instead of say, Johnny Manziel, the Cowboys have the pieces in place to break out of their perpetual 8-8 rut.

But beyond the rushing yards and physical tone they set, the impressive part was the way that group has protected quarterback Tony Romo. He looked far more comfortable than he did in London, when he was playing with the cracked bones in his back. He stood in the pocket forever late in the game, giving him plenty of time to survey his targets and find them.

Cowboys-Giants: 10 things to know from Dallas' 31-28 win - CBSSports.com
Among the 10 things Josh Katzowitz took away from this game, this one stands out the most:

And with Tony Romo's 13-yard touchdown pass to Dez Bryant with 1:11 remaining that capped a seven-play, 80-yard drive, the Cowboys out-maneuvered the Giants in grabbing the 31-28 victory on Sunday night. In the process, Dallas continued to look like a playoff contender that could be a dangerous squad in the postseason.

Consider how well the team (and the offensive line which gave Romo eons of time to find his receivers) played on its final drive. Credit to Romo, credit to Bryant, credit to Cole Beasley (?!), and yeah, credit to that stout offensive line. 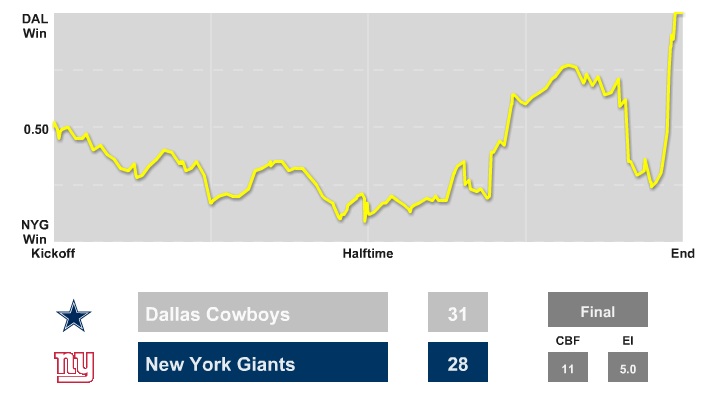 Dallas already ahead in preparing for Philly showdown- USA Today
The Cowboys used their bye last week to prepare for the Eagles, and they think that will help for the Thanksgiving showdown.

"We prepared during our bye week for Philadelphia, so we've got some hay in the barn," team owner Jerry Jones said after Dallas' 31-28 victory Sunday night against the New York Giants.

"We practiced maybe a few plays here and there just to kind of get a head start," cornerback Brandon Carr told USA TODAY Sports. "We see these guys twice a year. So the bye week was kind of just for us to prepare, get our feet back and get ready for this stretch we're coming into right now."

Bring on the Cowboys? Philly.com
There are worries in Philly that a "softer-than-Charmin pass coverage" and the loss of middle linebacker DeMeco Ryans does not bode well for Thursday's game against the Cowboys.

It didn't take a lot of imagination to envision Tony Romo carving up this turkey the way Green Bay's Aaron Rodgers did last week. You have to assume Casey Matthews and first-round rookie Marcus Smith will be chasing Jason Witten around in some coverages - there isn't time to sign another linebacker and teach him the defense by Thursday.

"I know it's a big-time rivalry," Mark Sanchez offered. "We're in the third quarter and people are screaming about the Dallas game, and this thing is still going on. It's like, 'What are they talking about?' "

"We Want Dallas!" Cowboys Prep Begins - Phladelphiaeagles.com
Careful what you wish for.

With the Eagles ahead comfortably in the second half of Sunday's 43-24 win over the Titans, the chants rained down from the rafters of Lincoln Financial Field.