The Cowboys kept their playoff hopes alive with a win over the Bears last week, but their playoff odds didn't improve with the win. We look at why and also look at which teams to root for this week - apart from the Cowboys.

Last week, when we looked at the Cowboys' playoff odds prior to the Week 14 games, those odds were at around 50%. One week and one win over the Chicago Bears later, those odds are still hovering around 50%, depending on which source you look at. How did that happen?

Simply put, every game relevant to the Cowboys' playoff odds went against them in Week 14.

With just three games left, the options for how the Cowboys can make the playoffs have narrowed down significantly, and most of the remaining options are little more than theoretical exercises. But let's review the playoff odds anyway.

Different methods deliver different results when it comes to playoff odds. To illustrate the point, here are the playoff odds for the NFC teams as calculated by three different methods, two of which have been updated to reflect the Cardinals' win over the Rams on Thursday.

Compared to last week's playoff odds, this week's numbers see the Eagles' odds take a tumble. In part, this is driven by the loss against the Seahawks, but it is also due to the fact that the Eagles will play the Cowboys in the biggest playoff swing game of the week on Sunday.

Every playoff projection contains an assumption about how the remaining games will play out. NFL-Forecast for example has Philadelphia as a ca. 60% favorite against the Cowboys on Sunday. But no team comes out of a game with a 60% win. Barring a highly unlikely tie, either the Cowboys or Eagles will win the game, and either result will have a dramatic impact on each team's playoff probabilities:

For the Cowboys, that's a 55% swing in playoff probabilities based on Sunday's game. And the game is equally important for the Eagles, who see a 57% swing depending on the result of the game.

It is without a doubt the most important game of the year for both teams.

But the Sunday Night game is not the only game that plays a role in the Cowboys' chances of making the playoffs. Fivethirtyeight.com has a clever tool that shows how the other games can impact the Cowboys' and every other team's playoff odds. Here's the chart for the Cowboys: 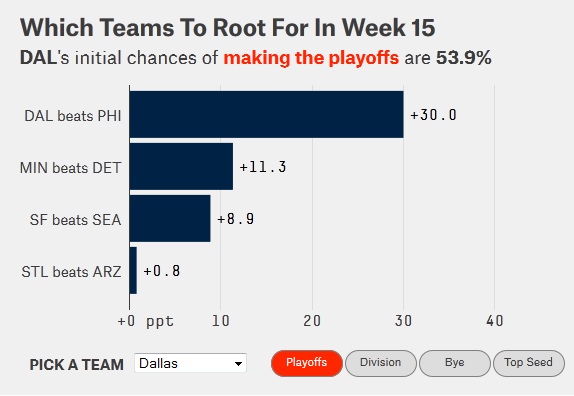 The 538 graph makes a good rooting guide for the Week 15 games. Rooting for the Vikings to beat the Lions is one of the easiest things I've had to do all year. Rooting for the 49ers is much harder, but is made bearable by the fact that their playoff odds currently sit at 5%. And rooting for the Rams on Thursday turned out to be a waste of time.

Unfortunately, there's a good chance Seattle and Detroit both win their games, leaving us in the same situation we had last week: every game relevant to the Cowboys' playoff odds will have gone against them. Again.

Which means the Cowboys need to win in Philadelphia. It doesn't get any simpler than that.