"He’s a nightmare," Colts coach Chuck Pagano said of Bryant. "He’s one of the most competitive guys that we’ve seen. He’s a great talent. He’s a great player. He’s a combination of size, athleticism and speed. But his competitive nature and his drive and his passion for the game and for his team and for winning is second to none.

"The guy’s a monster. … It’s going to take all hands on deck to just try to contain him and make sure that he doesn’t wreck the game."

Jerry Jones: Murray, Martin Likely To Play Vs Colts - CBS Dallas / Fort Worth
Jerry Jones told 105.3 The Fan he is "pretty positive" DeMarco Murray will play Sunday against the Colts, and spoke similarly of Zack Martin, who is dealing with an ankle injury. He’s less positive about right tackle Doug Free.

"Murray and Martin I’m pretty positive about having the ability to play them," said Jones. "I’m a little skeptical that we’ll have Free. Let’s see what the next few days bring."

Week 16 intrigues: Randle over Murray - CBSSports.com
Among the many things that intrigue Pete Prisco about Week 16 is the Cowboys' running back situation, for which Prisco offers a simple solution.

Cowboys RB DeMarco Murray with a cast on his left hand: He's been a fumbler with two good hands. It will be interesting to see how the Cowboys use Murray if he indeed does play. I would sit him out in this one. They can beat the Colts at home with Joseph Randle.

What’s interesting about the Dallas Cowboys listing DeMarco Murray as questionable vs. Colts | David Moore, DMN
Moore argues that while the signs are encouraging for Murray to play tomorrow, Murray is officially listed as questionable for the game - the same designation Tony Romo had for the Arizona game, which Romo ended up missing. Could the "questionable" designation be gamesmanship by the Cowboys, who may have already decided not to play Murray? This feels like a bit of a reach by Moore, but you never know with these things.

DeMarco Murray is determined to play | ProFootballTalk
"A source with knowledge of the situation" could be just about anybody, but for what it's worth, here's PFT's take:

Murray, per a source with knowledge of the situation, declared even before having surgery to repair a broken bone in his hand on Monday that he will play in Week 16. At this point, it’s believed to be primarily a matter of pain tolerance and management.

With Colts’ playoff berth secure, which players will Cowboys see Sunday? | DMN
According to this Associated Press report, Indy coach Chuck Pagano is holding right tackle Gosder Cherilus out "for what he called the best interest of the team and Cherilus with the playoffs two weeks away." Might the Colts make similar business decisions with WR T.Y. Hilton and CB Vontae Davis, who are both listed as questionable?

Cowboys’ improving pass rush has to push Luck | Drew Davison, Star-Telegram
The Cowboys have notched 11 sacks in the last four games, which is twice as much as the 12 sacks they got in the first eight games. But does that mean they can get to Andrew Luck consistently?

"It was tough early on, man, but we’ve got a resilient group of men," Mincey said. "We’re starting to learn how to stay in our lanes and do things the right way. We always had an ability to do it, but we were always out of sync at times. Last week, everyone did their jobs, and we were at the right place at the right time.

"We have to do that this week. Andrew Luck is a fierce competitor and you’ve got to knock him out of his rhythm early. It’s tough to do, but we’ve got to rush him well."

DeMarcus Lawrence: It’s time for me to show up | Drew Davison, Star-Telegram
Lawrence has yet to make the kind of impact the Cowboys expected when they drafted him in the second round.

"I feel like I know the playbook well enough that I should be able to go out there, do my assignments, get after the quarterback or be a run stopper."

Twitter mailbag: The free agent roadmap - Todd Archer, ESPN Dallas
In response to a Twitter question, Archer gives his take on what a timeline for the Cowboys' free agent deals could look like.

I think you'll see the Cowboys begin more earnest talks with the agents for Murray, Rolando McClain and Bryant in January, depending on how long the season goes. They tend to use sites like the Senior Bowl and Combine to talk to agents. Now just because they're talking doesn't mean a deal will be quick. When players get this close to free agency oftentimes they want to see what the market will provide for them so getting a contract done is a little more difficult.

I agree with you on the franchise tag for Bryant and I've been saying that since the summer. The cases of Murray and McClain are slightly unique because there has to be some caution about overpaying either player for different reasons. Normally these things go to the wire before free agency begins. If something gets done, I would guess it would be in that witching hour.

A look at NFL's most underappreciated, overblown - Yahoo Sports
When old memes die, enterprising souls will breathe new life into them by giving them a new twist. With the Cowboys at 10-4, all those "Jerry Joney sucks" and "Jason Garrett sucks" tropes are out the window.

Unless there's a reason why the Cowboys are good despite Jerry Jones and Jason Garrett ... Enter Howard Fendrich of the Associated Press:

Tony Romo, Dez Bryant and the rest of the Dallas Cowboys head into Sunday's game against the Colts leading the NFC East and on the verge of a playoff berth. A ton of the credit for that should go to head coach Jason Garrett's assistants.

Garrett's the one thought to be on the hot seat entering the season. He's the one who has owner Jerry Jones whisper in his ear on the sideline. And he's the one who's likely to receive plenty of praise from fans if the Cowboys do return to the postseason for the first time since 2009.

Truth is, Garrett has become little more than a caretaker for Dallas (10-4). It's the folks working under him who are steering a team that was supposed to be an also-ran to respectability - and their contributions are about as underappreciated as it gets in today's NFL.

Every time I read a sentence starting with "Truth is" somewhere, I know what follows is usually anything but. What a bunch of baloney.

Dallas Cowboys Week 16 Rooting Guide | FiveThirtyEight
Tonight, you root for the Redskins. If you cannot do that for historical, political, or personal reasons, root hard against the Eagles. 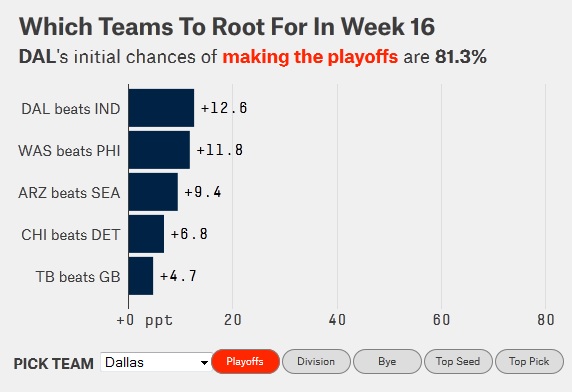 A Quarterback Rating That Tries to Measure All the Little Things - NYTimes.com
If you know the difference between quarterback rating and passer rating, this will we up your alley; if you don't, it's probably better to move on from this: Chase Stuart from FootballPerspective.com brings his special brand of perspective to the New York Times, where he takes a long look at ESPN's Total QBR and how it differs from the traditional passer rating. He starts off with a deep-dive on Andrew Luck and then goes on to explain how Total QBR incorporates more elements of a QB's play than the passer rating can, but that its biggest flaw remains its proprietary nature.

Cowboys Have Been The Third Luckiest Team In The NFL | FiveThirtyEight
Using the trusty Pythagorean Formula Sharon Katz calculates which teams have over- or underperformed their expected wins. Turns out the Cowboys are 1.8 wins above their expected win total, the third best value behind the Cardinals (+2.7) and the Bengals (+1.9).