The Cowboys improved their playoff odds with a win over the Bears on Thursday. Elsewhere in the NFC, other teams are busy calculating playoff probabilities pending the Week 14 game outcomes.

Three games remain for the Cowboys, and four for the rest of the other NFC teams, to decide who advances to the 2014 NFL playoffs. Which teams will make it is anybody's guess, as only two teams so far have been mathematically eliminated from postseason contention - the Giants and Redskins can both focus on securing that top three draft spot.

Pending the various possible game outcomes this week, the NFC playoff contenders could see a significant change in their odds of making the playoffs - in both directions.

There are countless possibly ways of calculating playoff odds, but the one thing they all have in common is they all make assumptions about how the final four games will play out (or for the Cowboys, the final three games). And because these assumptions differ from one method to the next, the playoff odds for every team will differ, depending on which method you're looking at. To illustrate the point, here are the playoff odds for the NFC teams as calculated by three different methods, not all of which have been updated to reflect the Cowboys' win on Thursday in Chicago.

Despite what the odds say, if the season were to end today, the Cowboys would be the fifth seed in the NFC, and the Seahawks would join the Cowboys as the second wildcard team for the NFC. Of course, the other NFC contenders all still have to play their Week 14 games, so that seeding is likely going to change again in two days.

Each of the odds in the table above is calculated in isolation, meaning the odds do not account for favorable or unfavorable results in other games. The following graph illustrates how the outcomes of the other games could influence a team's playoff odds, using the Cowboys' playoff odds as an example: 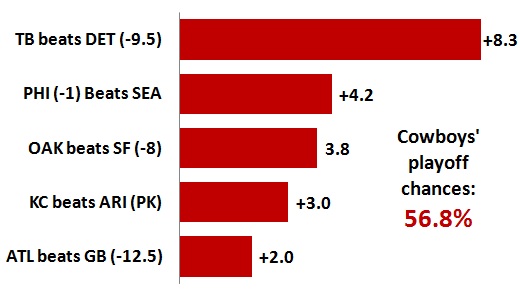 Technically, the graph can be used as a rooting guide for the Week 14 games. But while I intellectually understand that the Seahawks losing to the Eagles would be beneficial for the Cowboys' chances at a wildcard spot, there is no freaking way I can root for an Eagles win under any circumstances.

Disappointed in the overall playoff odds for the Cowboys? Keep in mind that all the models contain projections for how the rest of the season will play out. Right now, the NFL-Forecast model has Philadelphia as a 60% favorite against the Cowboys in Week 15. But that percentage hides the fact that barring a tie, one team will win the game next week, either the Cowboys or the Eagles. And here's how the outcome of that game in nine days will influence the playoff odds for both teams, and why the game is the biggest swing game of the season for both teams:

The Cowboys need to win in Philadelphia. End of discussion.