Latest Cowboys headlines: The Cowboys are no longer a losing team; Cowboys O-line bullied the Bears; An NBA coach calls Jason Garrett "one of the best coaches I’ve ever seen."

Carlisle on Garrett: 'Best coaching job I've ever seen' - Tim MacMahon, ESPN Dallas
It may not be en vogue in Cowboys circles to praise the coaching staff - or the front office - for the success of the team this year, but Dallas Mavericks coach Rick Carlisle has no such qualms.

"Jason Garrett is one of the best coaches I’ve ever seen," Carlisle said during his weekly show on ESPN Dallas 103.3 FM. "He continues to impress me year in, year out, game in, game out. I’ll remind everybody again how they were positioning – not him, but other people in that organization – were positioning their season as, ‘Eh, you know, this may be a bit of a rebuilder.’ And this guy’s done the best coaching job I’ve ever seen."

"He’s done a phenomenal job just all-around, you name it," Carlisle said before the Mavs faced the Phoenix Suns. "That team was supposed to be rebuilding and everything else. Their defense was supposed to be the worst. It’s just a really tremendous job."

In Cowboys Nation, we sometimes fail to see the forest for the trees.

The Dallas Cowboys, America’s most competent team - The Washington Post
Like Rick Carlisle, Adam Kilgore provides an outsider's take on the Cowboys, and he too comes away impressed:

For the first time since 2009, the Cowboys will finish with a winning record. It remains to be seen if they will make the playoffs, but they have managed to flip their identity. The perennial circus act has become a study in steady competence.

The turnaround traces to several factors, starting with their offensive line. It is possible the Cowboys can run the ball better than any team in the NFL can do any one particular thing.

This season, the Cowboys have proven they are no longer a disaster in waiting, that those miraculous debacles will befall some other team.

Cowboys bully Bears - Pro Football Focus
PFF write that you don’t often see an offensive line manhandle an opposition the way the Dallas Cowboys did the Chicago Bears, and single out Travis Frederick and Ronald Leary for extraordinary praise.

Travis Frederick: +7.3. It’s the ability of the Cowboys’ running game to score yards on different runs that makes them such a deadly rushing attack. They’re able to do that because Frederick can execute whatever is asked of him. If they want him to reach on a three-technique he can do it. If they want him to get movement on a double team and then work to the second level, he can do. The Bears merely provided the canvas for him to showcase his art. Signature Stat: 131 of the Cowboys’ rushing yards came on A-gap runs.

Ronald Leary: +6.2. The weak link in the Cowboys line, yet good enough that he’d be a starter for most teams in the league. Leary is the unheralded member of the unit but he took his chance in this win, where the play calls saw him getting to the second level on a regular basis to inflict punishment on Bears defenders. Signature Play: You can say it was against a cornerback, but you don’t often see a pulling blocker generate the kind of movement (with a block to the ground for added emphasis) that Leary got with 14.50 left in the game. 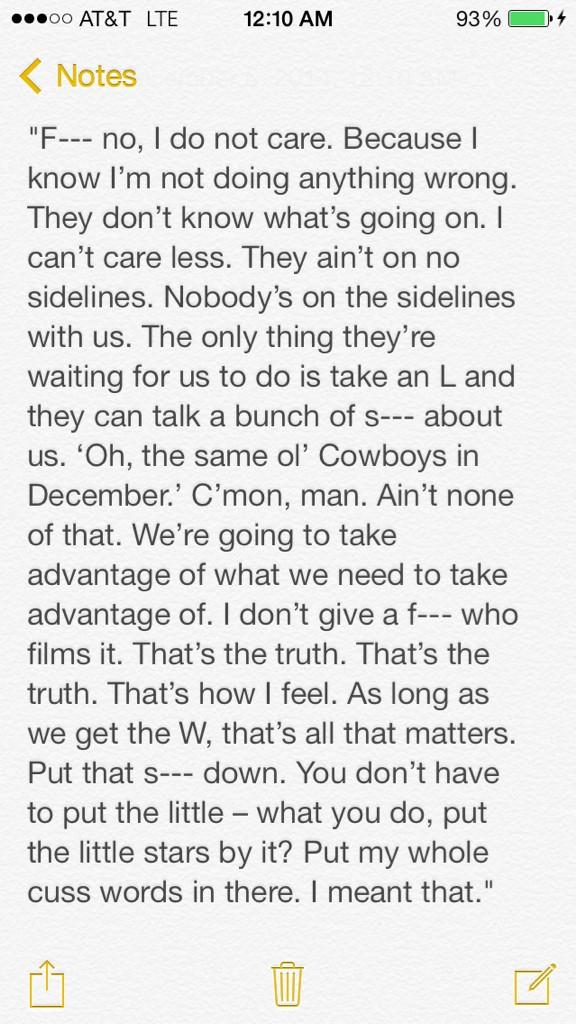 Dez Bryant Not Worried About Perception | Scott Crisp, NBC 5 Dallas-Fort Worth
Cowboys receiver Dez Bryant doesn't care how his behavior on the sidelines looks to outsiders, and he's not shy about letting people know about it either. You can read Bryant's statement in all its righteous glory in the image box on the right of this screen, courtesy of Tim MacMahon of ESPN Dallas:

Orlando Scandrick: We couldn't let another comeback happen - ESPN Dallas
Dez Bryant wasn't the only Cowboys player caught by the TV cameras animatedly trying to communicate a point to his teammates. Scandrick explains what was going on with him:

"Man, I've been around here and I done been around some crazy, miraculous debacles," Scandrick told ESPNDallas.com. "What was running through my mind is, as a person, I cannot let this happen. So when you see me have an outburst or freak out, it’s because it’s going through my mind to do everything possible to stop this from happening. Sacrifice yourself to stop this from happening."

Romo said after Thursday night's 41-28 win against the Chicago Bears that he was playing with a broken rib. However, multiple sources say Romo misspoke and that he had torn rib cartilage, not a break.

The quarterback said he was unsure when he suffered the rib injury, but a source said it came when he took a big hit from Seattle Seahawks linebacker Bobby Wagner in the first series of the Cowboys' 30-23 win Oct. 12. Romo did not miss a snap in that game.

Five Faces of Romo | NFL.com
In a career filled with ups and downs, Tony Romo has been many things to many people. NFL Media takes a comprehensive look at five distinct sides of the polarizing Cowboys quarterback -- and Judy Battista explains why it's high time for Dallas to capitalize on a 34-year-old at the top of his game. Hat tip to scottmaui.

Broaddus: Frederick’s Big Night; Grading Carr; Spencer’s Game-Changing Effort | DC.com
Broaddus shares his three biggest impressions from studying the tape of Thursday night's game between the Cowboys and Bears, including this one on Brandon Carr:

There were several snaps when the scheme called for man coverage that Carr was right where he needed to be -- which forced Jay Cutler to have to work the ball in another direction. His technique and positioning was outstanding. He wasn’t struggling to catch up or off balance.

The one problem he did have with Jeffery on the touchdown is that he did get pulled down, but he has to know that is going to happen when dealing with a player that has such size. Even if he would have battled back and drawn a flag, it would have still been better than what happened on that play.

Feelin’ A Draft: Will Deep Class Of RB Prospects Affect Murray’s Future? | Dane Brugler, DC.com
Dane Brugler takes a look at five rookie running backs who could be brought in as potential replacements for Murray.

The Dallas offensive line has consistently created run lanes and a rookie runner could potentially find similar success with a star on his helmet next year.

I find this a very troubling assumption. Murray will undoubtedly be an All Pro this year. If the Cowboys had an All Pro at any other position, would we nonchalantly talk about replacing that guy with a rookie?

NFL Star Jason Witten on Life as a Dad and His (Growing) Family - Yahoo Parenting
This is something completely off the beaten track of our regular news coverage, but if you're a parent, you should take the time to read this article that was written by none other than Jason Witten. Witten writes about his four kids, what life in the Witten house is like, and how he's grown into his role as a parent.

And while it’s awesome that I get to play professional football, my family is the thing that defines me. I want my kids and the way that I parent to be my legacy more than any touchdown catch or block or big game that I play in. I want people to remember me not for playing the game with integrity, but for living my life the same way.

RT @NewSchoolSS I'm guessing #Cowboys fans will view this as the best tweet of the day. (From Kris on FB) pic.twitter.com/nWI5182Ve1