In one of their patented unscientific and unsurprising polls, ESPN asked its audience to identify the nation’s most overanalyzed team on Thursday. Stephen A. Smith provided some background noise to accompany the chart below, but I'll spare you that. 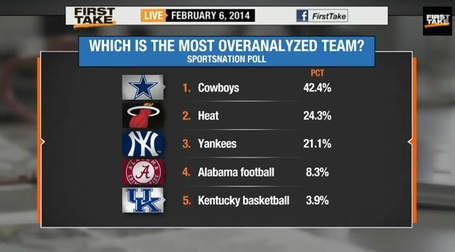 I'll tell you one thing: Given that we're scraping the bottom of the barrel with our links this morning, I'm not sure there's a lot of "analysis" going on about the Cowboys at the moment.

Developing, not drafting players, is the key to NFL success - Bucs Nation
I've grown more than tired of all the articles loudly proclaiming "What we can learn from the Seahawks," because most of them are hindsight-driven, shoddy pieces filled with questionable takeaways and a lot of oversimplification: "Draft tall corners!" - "Be successful in the late rounds of the draft!" - "Use more PEDs!" - "Play defense!"; the list of mind-numbing suggestions on how you can turn around your team with the press of a button is endless.

But along comes an article from our SB Nation friends at Bucs Nation that's actually worth reading and suggests it's much more about developing than drafting players:

The Seattle Seahawks have one of the deepest roster in the NFL, across the board. And yet, 21 of the 53 active roster members in the Super Bowl came into the NFL as undrafted free agents, per ESPN. The difference between great and mediocre teams isn't simply talent: it's how they develop that talent.

Seahawks/Pats success is treating entire offseason = draft+FA+UDFA+StreetFA, as one big draft. They take 40+ draft picks to TC to build

I mostly believe getting two players is better than one. That’s why I was OK with the trade down with San Francisco since the Cowboys were able to get Travis Frederick and Terrance Williams. That’s why I was opposed to them taking Tyron Smith in 2011 when they could have picked up two picks from the Jaguars and opposed to them moving up to take Morris Claiborne in 2012. The more picks you have, the better chances you have. Now Smith might be the exception to my rule with how he has developed and how he will be their left tackle for the next decade. But for this team and with this defense, I think the more quantity you can bring in, the better. They have a lot of holes to fill.

What is Cowboys' 'tiebreaker' position in upcoming NFL draft? | Brandon George, DMN
Jason Garrett offers up a new take on the old BPA vs need debate, introducing need as a tiebreaker between multiple BPAs.

"The biggest thing you try to do is get the whole landscape of things, and then you start thinking about your team very specifically, and you start zeroing in a little bit," Cowboys coach Jason Garrett said.

"But it’s really important, we feel, to make sure you try to draft for your team devoid of need as much as you can."

Looking at Free Agent Pass Rushers - Over the Cap
OTC takes a look at the free agent pass rushers available in 2014, and if you were harboring any thoughts of the Cowboys miraculously coming to terms with Anthony Spencer on an affordable deal, then you may want to avoid this article altogether.

The injury plagued 2013 might make his status lower though he essentially posted the same numbers in 2011 and 2012 as [Seattle's Michael] Bennett did in 2012 and 2013. Spencer can play run and will drop off into coverage as well. He’s making that turn into his 30’s so the contract window may be shorter for Spencer than others. I would picture him to also be around $7 million a year unless he opts for a one year deal to prove his health, though at 30 that is probably very risky.

Football helmets in the 'Star Wars' universe - NFL.com
Want to see what football helmets would look like in an alternate universe? Illustrator John Raya created "Star Wars"-inspired versions of the NFL's 32 teams, including one for the "Yavin Rebels." Yes, we've reached the bottom of the barrel. So sue me.