When I first saw the phrase "Swarming Rotation" used on Twitter yesterday to describe the potential 2014 Dallas Cowboys defensive line, I thought it was just a bad euphemism for a "D-line full of nobodies."

But because I was curious, I googled "Swarming rotation" and was surprised to find just 61 hits, some of them about basketball, none of them about football. Intrigued, I did a little more research, and found that Cowboys Assistant Director of Player Personnel Will McClay had used "rotation" just a month ago to describe the scheme the Cowboys want to use on their defensive line.

And for the scheme to work that we're using now - it's very evident when you go back to the Chicago Bears, Tampa Bay Buccaneers of old, Seattle Seahawks now - you've got to have depth. It's all in how you put the pieces together to build that depth of the seven-, eight-man line that you'll need in a rotation during the season if you're going to play fast and do the things that we do. [emphasis added]

In 2013, with Anthony Spencer and Jay Ratliff out of the picture early, the Cowboys trotted out a defensive line to start the season that consisted of George Selvie, Jason Hatcher, Nick Hayden and DeMarcus Ware, and for the first four games of the season, that quartet remained healthy. Over those four games, the four starters played on 71% of the defensive snaps. If you were to add Spencer's 38 snaps in Week 2 to the total (he subbed in for George Selvie on most plays), the Cowboys starters would have accounted for an even 75% of the total snaps.

That number contains the snaps from the 31-7 blowout win over the Rams in Week 3, when the Cowboys played large parts of the second half with their second- and third stringers on the defensive line, but overall 75% looks like a good target number for the defensive line starters. After all, if you have a healthy DeMarcus Ware or Jason Hatcher playing for you, why on earth would you take them off the field - unless they need a breather or the game is already decided.

The playing time of the Cowboys starters would take a hit later in the season with injuries to DeMarcus Ware and Jason Hatcher, but here is what the snap counts for the top eight Cowboys defensive linemen looked like in 2013: 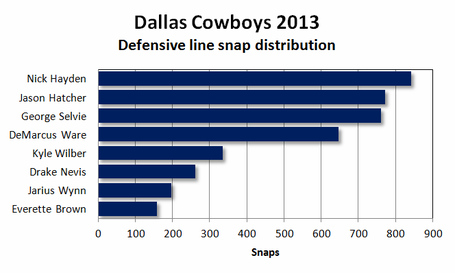 Ware missed three games with injuries, Hatcher missed one, which lowers their total somewhat. But overall, this looks about like what you'd expect: you've got four starters who take the bulk of the snaps and are occasionally spelled by the backup players.

Except in the Cowboys' case, the story might have been a little different last year: you've got four starters who had to take the bulk of the snaps and were occasionally spelled by backup players when absolutely unavoidable.

We've heard all about how the Cowboys cycled through 20 defensive linemen last year, and if you look at the four backups in the table above you quickly realize that depth was a big issue for the line:

But before we start a collective "Woe is me" chant, the snap distribution chart above is not unique to the Cowboys. Many 4-3 teams have a similar distribution. Take the St. Louis Rams for example, whose front four are the envy of many a GM in the league and who ranked third last year with 53 sacks: 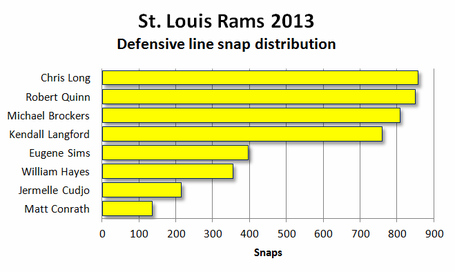 Same logic here as with the Cowboys, unless guys like Chris Long, Robert Quinn or Michael Brockers are injured or need a breather, why would you take them off the field?

Teams like the New England Patriots even took it a step further and hardly ever took their top guys off the field. Here's what their chart looks like: 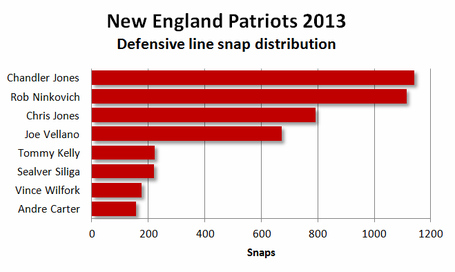 Defensive ends Chandler Jones and Rob Ninkovich stayed on the field for almost every defensive snap. Obviously, the Patriots' injury situation played a role in that distribution as well, but they show the same distinct drop off from the number four guy to the number five guy that we already saw with the Rams and the Cowboys.

All three teams that we've looked at so far had issues with their depth, either due to injuries or quality of depth, and perhaps even both. But there is one team that had sufficient depth on their defensive line over the course of the season. Will McClay pointed them out in the quote above as a team that runs a similar scheme to what the Cowboys want to run; here's what the Seahawks rotation looked like: 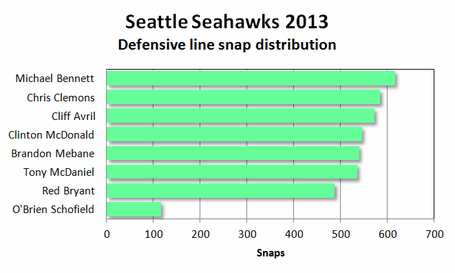 The Seahawks rode that 7-man defensive line rotation all the way to a Super Bowl win, as their health and depth allowed them to maintain pressure on the passer throughout the game and throughout the season. Can the Cowboys emulate the Seahawks D-line in 2014?

In 2013, the Cowboys were pretty bad at containing opposing offenses, especially as games wore on. Here's how many points the Cowboys gave up by quarter, and where that ranks them in the league:

Obviously the defensive line is just one part of the issue with the Cowboys defense, but it's hard to argue that having rushmen with fresh legs in the 3rd and 4th quarters of games wouldn't improve the overall defensive performance. Part of that is conditioning, and I'll simply assume that the Cowboys have a handle on that. The other part is depth, as the Seahawks demonstrated.

And that's the key challenge for the Cowboys this year. The Cowboys currently don't have much in terms of starter-level quality for their defensive line, and their depth is a big question mark too. If Dallas is looking to get back to an 8-man rotation along the line, they'll need to sign some more guys and also draft some extra help.

Absent a bona fide superstar on the defensive line like a healthy DeMarcus Ware, the Cowboys may have no choice but to opt for a higher level of rotation, where the snaps are more evenly distributed among their linemen than they have been so far. But whether that will end up being a "swarming" rotation ultimately depends on the quality of the guys they can get. Otherwise the Cowboys could easily end up with a line full of interchangeable players who may be fresh at the end of games but are just not very good.