Latest Cowboys headlines: Brandon Weeden think Dez Bryant is a freak, Henry Melton could be this year's Michael Bennett, and we look at one take on why rumors like 'Chris Johnson to Cowboys' persist in this day and age.

"He’s a freak," Weeden said. "I’m not surprised he’s done what he’s done at all. Dez was born to play one sport and it’s football. He’s a freak. He’s one of my all-time favorite teammates. I loved being around Dez. He’s like a little kid, happy go lucky, a fun guy to be around."

"I figured his career would go like this, a superstar top-two receiver in the league. I knew it from Day 1 on campus. We were running routes and he ran a bang 8, a skinny post, full speed and the quarterback threw it behind him. He just reached back, caught it with one hand in stride. I was like, ‘Holy cow.’ I knew right then this kid had it."

Who's this year's Michael Bennett? - NFL.com
Michael Bennett used a one-year deal with the Seahawks in 2013 to earn a big payday in 2014. Who will do the same this year? This article suggests that guy could be Henry Melton.

Melton was one of the most disruptive interior pass rushers in football in 2012 under Rod Marinelli, now the Cowboys' defensive coordinator. You don't normally get a Pro Bowl player in his prime for so cheap, but Melton is coming off a torn ACL and an arrest. This is how you win in free agency: Buying low. We'd rather have Melton than Jason Hatcher, who left for far bigger bucks in Washington.

Stephen Jones: Dallas Cowboys taking harder look than ever at free agents’ age, injury history | Jon Machota, DMN
Stephen Jones indicated that the Cowboys still have enough cap room to make some moves in free agency, but continue to look for value. The Cowboys are also adjusting their evaluation process when looking at a potential free-agent signing, especially one like Anthony Spencer with an injury history and on the wrong side of 30.

"I don’t ever want to say never, but when you talk about making your commitment long term, I will say that we’re taking a lot harder look at it than ever before," he said. "Because whether we were just unlucky or whatever it is, you certainly have to say, ‘Hey, we’re going to have to do something different.’ Certainly two years in a row, we’ve had a problem with that."

Chris Johnson to the Cowboys? - NFL.com
Apparently, Chris Johnson followed Jerry Jones on Twitter, which is more than enough reason to speculate about a possible move. Entire wars have been waged on less evidence than that, so who's to blame a sportswriter for not looking for any additional evidence?

Due $8 million under his current deal, Johnson is more likely to be released than traded. Wesseling's list of potential landing spots begins in Dallas, an intriguing match after the boom-or-bust runner followed Jerry Jones on Twitter. He would give the 'Boys a tasty weapon to pair with DeMarco Murray, but Dallas needs to get creative with the cap to make this happen.

"Got to Seattle last night with Jared, [his wife] Amy, and his family," Allen’s agent Ken Harris told PFT. "We had a great time meeting everyone during this visit. After some good discussions with the front office today, Jared and Amy are going to consider the Seahawks offer along with the others, and make a decision this weekend."

Hey @JaredAllen69: Sign with Dallas. Cowboys stage made for you. There, you'll get credit for turnaround. Be a star not Seattle sub.

Stephen Jones: Jerry Jones still heavily involved in Dallas Cowboys’ personnel decisions | Jon Machota, DMN
Stephen Jones clarified that he and his father work closely together with head coach Jason Garrett and director of player personnel Will McClay on all personnel decisions, and that Jerry Jones wasn't in Dallas for the signing of Henry Melton because he "had a business function that he just couldn’t miss."

Potential Pick: QB Bridgewater Could Ignite Trade Scenarios - Nick Eatman, DallasCowboyscom
Eatman mulls how Bridgewater could help the Cowboys if he falls in the first round.

We’ve seen other highly-ranked quarterbacks drop and it’s turned into value for the Cowboys, who made a draft-day trade with a team wanting to get the fallen quarterback. It happened in 2004 when Buffalo wanted J.P. Losman and then again in 2007 when Cleveland traded up with the Cowboys to get Brady Quinn. Both times the Cowboys ended up getting a first-round pick in the next season. It’s unlikely that scenario would happen again, but sometimes a deal is too good to pass up on him, and usually, those deals will occur when a team wants a quarterback.

A closer look at running back aging patterns Part II — FootballPerspective.com
Chase Stuart looks at 723 running backs since 1970 who had at least 150 carries in consecutive seasons to produce a career curve for NFL running backs: 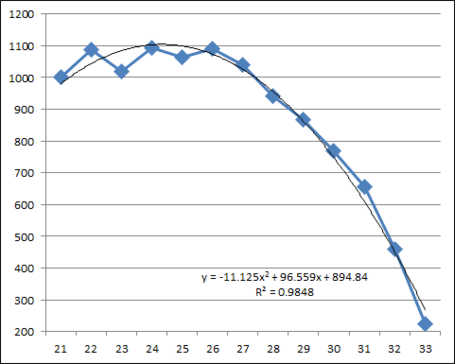 Six Things Younger Fans Don’t Remember About Sports Media | The Tailgater
Mike Tanier offers an interesting article in which he takes a look at the Sports Media landscape 25 years ago ("ESPN and Chris Berman were cool") and traces most of the things we find annoying about today's sports media back to that period. An excerpt:

All-sports networks still take their cues from the ESPN heyday, while the sportscasting profession is forever polluted by a generation of Berman wannabes.

When the talk shows flood with talk of trading the backup quarterback for some other team’s treasures, it’s a remnant of the era when a dozen keystrokes could not verify the other team’s true plans.

Those opinion columns that seem to exist in a bubble — the ones the cool kids laugh at, with one-sentence paragraphs and bully-pulpit proclamations — hail from the era when real facts were harder to find.

And now that even small markets have two or three sportstalk radio stations, we can thank our 1980s’ forbearers [sic] for showing just how long a quasi-scandal can be milked on the air.