A nuance in the Cowboys' scheme tells us Dallas could still add a premier 3-technique defensive tackle during the draft.

Share All sharing options for: The Cowboys Should Still Take A Defensive Tackle Early In The Draft

The Aaron Donald love train has become a heavily populated vehicle for the past few months here at Blogging The Boys, at dallascowboys.com, at Bob Sturms' Blog, at the NFL Network, you name it, they are talking highly of the All-Everything Defensive Tackle from Pittsburgh. Some around here have been on the train since early in the 2013 season, others caught on when I wrote this scouting report the week before the Senior Bowl, the guys at DC.com jumped on about the time they saw him do this to Cyril Richardson in Mobile.

Last week, when the Cowboys were able to sign 2012 Pro Bowl under tackle Henry Melton, to a one-year, very cap-friendly contract, with a three-year team option, many began to wonder if the Cowboys might be better off pointing their early-round resources in a different direction to maximize their impact. While others are wondering if either Melton, or Donald, or another early-round under tackle candidate could move to the Cowboys cocked-nose position in certain situations to provide extra pass rush.

If we look at the Cowboys scheme defensively, we can see a not-often-discussed nuance that shows the value of having an extra under tackle type player, beyond just the basic rotation. 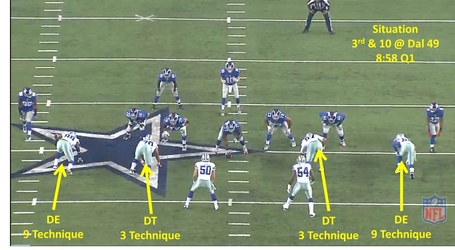 The important thing here is the alignment of the two defensive tackles. As you can see, Jerome Long (left) and Jason Hatcher (right) are both aligned on the outside shoulder of the offensive guard to his side, also known as the 3-technique. These are the situations, when having a guy like Donald, or Will Sutton, or another explosive pass-rushing defensive tackle could be extremely valuable for Rod Marinelli's group.

If the Cowboys could hypothetically add Aaron Donald in round one, and Marcus Smith, DeMarcus Lawrence, or another of the plethora of talented speed edge rushers in rounds two or three, they could put any combinations of the following guys on the field in pass rush situations. (Assuming Donald & Smith are the rookies).

While not exactly a group of huge names, these are guys who have either proven themselves as quality rushmen, (Melton & Selvie) or shown potential at one time or another, and if they are rotated and kept fresh throughout the game, they have a chance to be a very effective group.

You'll also notice, I didn't include any of the three guys who I consider to be possible 1-technique cocked nose players for the Cowboys. Nick Hayden, Terrell McClain and Josh Brent are all missing from this list. Meaning that whichever two of those three end up on the roster, they are only forced to play in possible running situations. This would maximize their effectiveness in that role and increase the productivity of the guys who do rush the passer in nickel situations, possibly helping the defense get off the field on third down and late in games when they need a stop to preserve a lead.