Cowboys Wideouts, The Draft And The Phenom Index: Worth Considering?

The Cowboys seem pretty set with their top two wideouts, but many say another receiver is needed. Could this metric help find the right one?

Share All sharing options for: Cowboys Wideouts, The Draft And The Phenom Index: Worth Considering?

Do the Cowboys need to bring in a wideout to replace Miles Austin? Isn't Terrence Williams capable of becoming the necessary threat opposite Dez Bryant with just some more seasoning? When it comes to the Cowboys needs and the draft, the offensive side of the ball might not be the first, second or third conversation... but it is deserving none the less. The draft is meant to replenish a roster for years; it's not only a tool for filling today's potholes.

When draftniks say this is a loaded draft class, they mean it. 2014 might possibly be more stacked than any draft in recent history and nowhere is this more obvious than the wide receiver position. With the announcement of the compensatory picks earlier in the week, there are now 176 picks in the first five rounds of the draft. CBS Sports already had identified 25 different receivers in the Top 175.

Last year's draft, considered a more-than-decent representation in wideout talent, saw 17 of them selected in the first five rounds. Suffice to say, this should be a record haul.

However, as is always the case with draft rankings, there will be some that excel while others struggle to transform their collegiate accomplishments to the professional game. There are numerous reasons for this. Some players simply don't have what it takes to gain separation or win contested passes. Some get placed in situations that don't take advantage of their skill sets. Some were simply products of gimmicky college offenses. It happens.

One guy attempting to put some rationale to the effort of projecting a quality transition is Jon Moore. Moore has developed what he refers to as the "Phenom Index"; and attempts to utilize a formula based on collegiate performance to predict NFL superiority.

Moore's work is strictly an exercise used to predict productivity on the pro level, and he freely voices that this should only be used as a complement to more important evaluation, such as film work and the rest of the draft process. Still, his formula does return some interesting results.

The Phenom Index is my way of adjusting production based on how old a prospect is when they produce it.

In a nutshell, Moore normalizes the production of a wideout in his final year against the age of said player. The higher the Phenom Index, the more likely the player to be able to dominate at the professional level. A player whose production matches the average for his age would receive a Phenom Index score of 1.

The metric is derived by taking the percentage of a team's passing game a player is responsible for (his receiving yardage divided by total passing yards, also known as a "Dominator Rating") and dividing that by his age.

Moore studied players that were taken in the Top 100 of the drafts between 2006 and 2013, highlighting each end of the spectrum. Both Cowboys wideouts, Dez Bryant and Terrence Williams are scored here, but end up on opposite ends of the spectrum.

In Dez Bryant's final full collegiate season, he was 20 years old on the final day of the year. His production, 1480 yards out of a possible 3149 gave him an "amazing" dominator rating. Combined with his age rating of "very young" Bryant's Phenom Index came in as the fifth-highest over that span, 3.02. 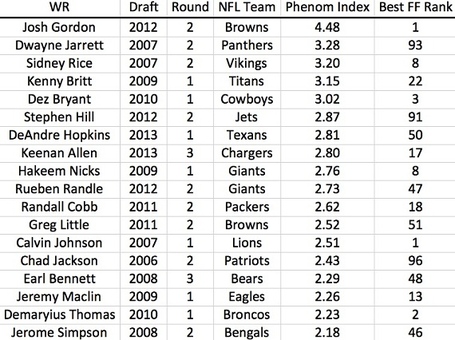 Some might look at the top of the list and quickly dismiss this metrics validity, but look again at the "failures". Dwayne Jarrett had alcohol problems, Sidney Rice's career was derailed by a serious hip issue at the end of his breakout year, and Kenny Britt's legal issues are well-known. Those are things that no metric will be able to predict (although a thorough background and interview process might shed light on).

On the opposite end of the spectrum, albeit barely making the worst list, is Cowboys second-year guy Terrance Williams.

Although Williams was slightly above average (1.04) his age in his final season (23.5) negated his 1832 yards, which accounted for over 41% of the Baylor Bears' 2012 offense. Could this be an indicator of Williams being a competent, but not ground-breaking threat at receiver?

Whether or not one thinks these metrics are indicators of Williams' future development or not shouldn't be the point. This metric will prove its worth in whether or not it can sort through the numerous highly rated 2014 prospects to find immediate and future stars.

Out of the 13 receivers in Josh Norris' Top 100, the Phenom Index really likes two of my favorite targets above their pre-draft ranks. Allen Robinson of Penn State, who I consider Anquan Boldin-esque and Moore compares to Bryant, comes in second, with a score of 3.17. Robinson accounted for over 1,400 of the Nittany Lions' 3,100 passing yards in 2014. Robinson most likely will come off the board near the end of the first round or early second.

Another of my favorites is Donte Moncrief of Mississippi. I consider Moncrief to be the total package at receiver and he's projected as a late second to third round selection. Moncrief only accrued 938 of Ole Miss' almost 3700 yards, however the fact that he was their number one target at the tender age of 20 soars him up to 5th in the Phenom Index rankings.

Some interesting names with low scores? Marquis Lee (who I don't project well), Kelvin Benjamin and Martavis Bryant. If you want to excuse Bryant because he was on the same team as Sammy Watkins, you should note that LSU's duo of Jarvis Landry and Odell Beckham both scored near a 2 while Bryant is last amongst the 13 with a 0.97.

Of course, there will always be some that hold statistical predictors to higher standards than regular tools of evaluation. That is to say, the "look at the guys that didn't succeed despite the predictor!" crowd will fail to admit that other methods of analysis fail to perfectly predict things either. I'll certainly be paying attention to this year's receiver class to see if this new metric bears paying attention to.