Latest Cowboys headlines: The Cowboys could still be players in free agency; Safety Danieal Manning was released by the Texans and is automatically linked to the Cowboys; The devaluation of the NFL running back continues.

Re-setting Cowboys' free-agent needs - Todd Archer, ESPN Dallas
"Free agency never sleeps," Todd Archer writes and proceeds to list three free agents each at safety, defensive end, center/guard and wide receiver who could be fits for the Cowboys. And even though we're deep into free agency, there are still some moderately well-known names potentially available. Here's who Archer offers at wide receiver:

Nate Burleson, Detroit: A little old and a little hurt, but he knows what Scott Linehan is looking for and can help a young group.

Jason Avant, Philadelphia: Terrific locker room guy and can play inside and outside.

Earl Bennett, Chicago: Another guy with position flexibility but not the burner to make plays down the field.

Eagles castoff Jackson not a good fit for Cowboys | Keith Whitmire, FOX Sports
Whitmire draws comparisons to T.O. and concludes that Jackson's baggage would make the price too high for the Cowboys.

"I lived by pressure," Walls said. "(Ed) ‘Too Tall’ Jones, Harvey Martin, Randy White, I had plenty of pressure up there. They made me so upset sometimes, they took away my interceptions because they got there so fast…That’s the luxury that I lived with. The Cowboys need to shore up not just their front four, but their front seven."

"If you’re going to be good in the secondary, you have to be good on the defensive line, and that’s just all there is to it," Walls said.

The Devaluation of the NFL Running Back - Over the Cap
It was not that long ago that the NFL Running Back was considered one of the premier pay positions in the league, writes Jason Fitzgerald of OTC, and then proceeds to show that since training camp in 2013, running backs have been paid about as much as kickers. Here's the graph that illustrates the point very well. 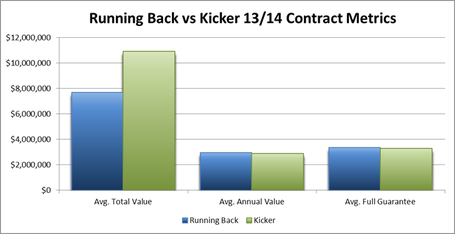 Danieal Manning released by Houston Texans - NFL.com
The Texans released a safety, and immediately all sorts of speculation starts about the Cowboys being interested.

Manning, 31, missed 10 games last season with a fractured right fibula. Even with his advanced age, he immediately becomes the best safety on the open market.

Potential suitors include the Redskins, Bears and Cowboys.

If you ever wanted a case study in how these types of things go, read this:

Here come the questions about Danieal Manning to Dallas... And for the record, I don't hate it.... Esp as a bridge

#Texans save $4.5M against cap by cutting Danieal Manning. Meanwhile, #Cowboys sniffed around at safety. Manning played for Marinelli. Hmm.

Whoever it is out there driving Danieal Manning-to- #Cowboys story sure isn't getting their info from VRanch Scouting Dept. Harumph.

"@flact75: Would the Cowboys be interested in Manning from Houston? I'm guessing too old, progress stopper?" You have guessed right.

The Dallas Cowboys have not reached out to recently cut Houston Texans safety Danieal Manning, who would love to play for the Cowboys.

Let The Youth Handle The Safety Situation - David Helman, DalasCowboys.com
Helman provides some perspective on the Cowboys safety situation, now that Danieal Manning has been released by the Texans.

Bringing in another veteran just seems like it’d slow whatever progress the young safeties – particularly Wilcox – are going to make. The Cowboys invested a pretty high draft pick in the Georgia Southern standout. His rookie season wasn’t amazing by any means, but he showed flashes of playmaking ability.

It’s easy to think back to his struggles, and Heath’s, and want to look elsewhere, but a stopgap veteran who will play a season, maybe two, doesn’t seem like the answer. You might as well find out what you’ve got in your youth movement.

Signing a low-cost free agent or drafting a safety might be a good idea if you want to foster competition. But for the longterm future of the defense, you might as well see what you’ve got.