Whether you're a fan or a hater, every time you google the Dallas Cowboys, their position as America's team is further cemented.

Share All sharing options for: New Survey Says Cowboys Are Still America's Team - And It's Not Even Close

Just how popular are the Dallas Cowboys?

One way to answer that question is to use Google searches. In a blog post published Friday for fivethirtyeight.com, an analytics website recently acquired by ESPN, statistician Nate Silver compiled Google search figures for each major North American professional sports team.

The Cowboys ranked first among all NFL teams, and the gap between the Cowboys and the Packers at number two is the biggest gap between any two NFL teams. The Eagles, Patriots and Steelers round out the top five.

Across all professional North American Sports leagues, the Cowboys rank third in Google searches behind only the Yankees and Red Sox. 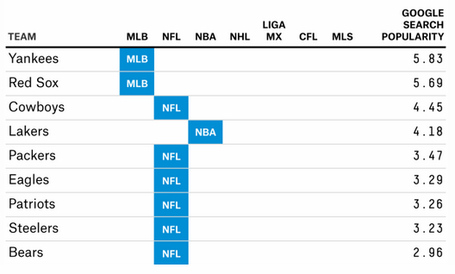 The data used for the survey is taken from Google Trends and is based on searches worldwide for each team since 2004. All figures shown in the survey are taken relative to the average team across all seven leagues; a score of 1.00 represents a team with league-average popularity. However, the numbers are not adjusted to reflect the NFL's 16-game season versus the NBA's 82-games schedule or MLB's 162-game marathon.

Behind The Steel Curtain, SB Nation's site for Steelers fans, provides the perfect summary of this survey:

5th is a respectable position [for the Steelers], and it is not much of a surprise to see the Cowboy rank 1st in the NFL, considering they are after all America's team.