The Cowboys are going to have one of the youngest offensive lines in the league in 2014.

Share All sharing options for: Cowboys Could Field Second-Youngest O-Line In The NFL in 2014

Assuming a starting lineup of Tyron Smith - Ronald Leary - Travis Frederick - Zack Martin - Doug Free, and with Martin looking to man the right guard spot Ronald Leary could indeed man the left guard position for the second consecutive year, the Cowboys' O-Line will have a combined age of 124 years on kickoff Sunday in September. Those 124 years mean that the Cowboys could end up with the second youngest O-line in the league.

Those 145 combined years may be pushing it, if you believe in what ESPN's John Clayton wrote about in his "Theory of 150", in which he explained that if the combined age of your starting offensive line exceeds 150 years, you should expect a decline in performance.

If a team lets its starting offensive line exceed the total age of 150 years for five starters, the clock is ticking on its remaining success.

Why 150 as a cutoff point? The mathematically inclined may have already figured it out: A combined age of 150 years means the average age of your linemen is 30 years, and as a group, that may be too old. The 30-year age-limit also chimes nicely with the widely held belief that for NFL players, decline inevitably sets in at age 30.

The graph below shows the age distribution of the 160 projected O-line starters for the 2013 season. The data is taken from the Ourlads.com team depth charts, which are usually quite accurate and up-to-date. 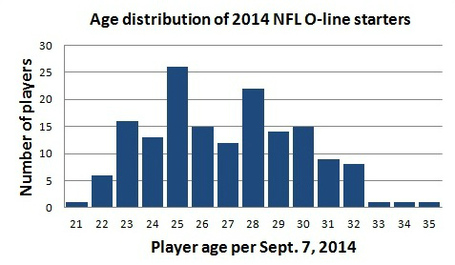 What you can see on the chart is that there is indeed a drop among starting offensive linemen in the NFL after 30 years of age. We still have some linemen playing at ages 31 and 32, but it thins out after that. According to the Ourlads depth charts, there are just three OL starters who will enter the season 33 years old or older. Interestingly, all three guys are centers: Detroit's Dominic Raiola (35), Chicago's Roberto Garza (34), and the Rams' Scott Wells (33).The youngest projected starter is the Rams' Greg Robinson, who won't turn 22 until October 2014.

But back to Clayton's Theory of 150. Here's how all NFL teams compare in total combined O-line age, based on the Ourlads.com depth charts:

Keep in mind that these are averages, and because there are only five guys counting against the total of each team, having an older veteran on the line can give a false impression if you only look at the average. For the Cowboys though, the 124 age total is just one possible scenario. A possible alternative could see Mackenzy Bernadeau (28) replace Ronald Leary (25). That would add three years to the Cowboys total, but still leave them with one of the youngest O-Lines in the league with a combined 127 years of age. You can go through any number of iterations along the Cowboys O-line, the result will always leave you with one of the youngest offensive lines in the NFL - and that's quite a turnaround from just four years ago when the 2010 starting line of Free (26) - Kosier (31) - Gurode (32) - Davis (32) - Colombo (31) totaled 152 on Clayton's scale.

Looking across the NFC East, notice how the Cowboys have a 21-year lead over the Eagles, a 17-year lead over Washington and a 16-year lead over the Giants. That means that with its current line, the Cowboys can play three to four full seasons before reaching the average age of the current lines of their division rivals. And it also means that the other teams in the East will soon have to invest a number of draft picks to shore up their ageing O-lines, with Dallas far ahead on the curve in this category.