Prior to the 2013 season, we got ourselves all excited about what the Cowboys were going to do with the 12 personnel package. That didn't work out so well, as the 11 package wound up the most used and most effective for Dallas. That should be a trend that continues this year.

Share All sharing options for: Will Dallas Rely On "11" Personnel In '14?

In the news recap Friday, OCC included a link to a Football Outsiders article about how the 11 personnel package has now become the most common and most effective group of players used by offenses throughout the NFL. The Dallas Cowboys were right in the middle of this trend as the 11 became the grouping of choice last season.

Dallas has a new offensive playcaller in Scott Linehan, but Jason Garrett is still the head coach and Tony Romo is still the quarterback. I expect that Dallas will continue to run the majority of its offensive plays with 11 personnel this season. That should be a good thing.

Before I go on, let me put up a picture here, because not everyone is well versed in the terminology and knows that the first number in designating personnel groups refers to running backs and the second to tight ends. 11 means one of each, which also means that there are three wide receivers (plus, of course, one quarterback and five linemen). It does not refer to formation or alignment, just who is on the field. Here is one typical play using 11 personnel in a shotgun formation. The names are not who is in the picture, obviously, but who I think will be the primary group this season. 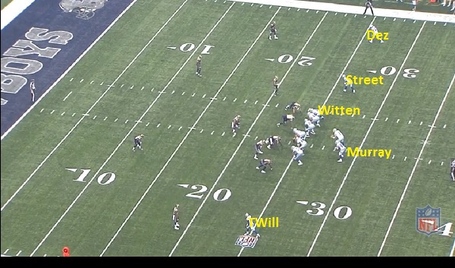 There you have it, Dallas in a shotgun with their top five offensive weapons lined up with Romo: Dez Bryant, Jason Witten, DeMarco Murray, Terrance Williams, and Devin Street. For you Cole Beasley fans, I think he will be playing about the same number of snaps as Street, but I also think the Cowboys will try to use Street's height, particularly when they are getting close to the end zone, as this example shows. Dwayne Harris will still primarily be a returner and special teams warrior.

As I said, the formation here is typical, but just one way the players can be lined up. The same group of players can be used to put Romo under center or to motion the running back out to put five receivers in the pattern. They can run out of this formation as well as pass (and a few runs early would open up play-action later). Delayed handoffs can be especially effective as the receivers pull the defensive backs down the field with them.

But to me, the most exciting thing is the idea of moving the three wideouts around. That is why all the talk about how well Street runs routes is so interesting to me. I want to see them bring Bryant over into the slot sometimes, something that should create some interesting matchups. Having Street already able to handle a fairly complete route tree, and Williams also able to take on a wider variety of patterns in his second year, means that the three top receivers become pretty much interchangeable. Any of them can go deep to stretch the coverage out. Given how similar they are in size, Romo now has very little adjustment to make in throwing to any of them. Those back shoulder throws should work beautifully for any of the three.

It is also another, subtle benefit of drafting Zack Martin. Hopefully he will be an upgrade in pass protection, so that the line will be able to keep Romo upright with some help from Murray, who usually does a good job picking up rushers as well as serving as an outlet if things are not open downfield. An extra tenth of a second or two to find the open receiver can pay some big dividends with this kind of quarterback.

There will still be times the 21 and the 12 personnel groupings are used (probably in that order of frequency after 11), but the one back, one TE package is likely to be the bread and butter for the Cowboys again this year, just like it will for the majority of teams. It may not be wildly inventive or original, but it is the most effective offensive formation for almost all teams, and that certainly includes the Cowboys.