The Cowboys will go into their draft with all sorts of resources. A few of them may just resemble this.

Today is Draft Day and there's no time to waste. I've spent the offseason watching tape on prospects and reading reports of people that are much better talent evaluators than I would ever claim to be.

I think it's important for people that put rankings out there; add a disclaimer. Admit what you don't know, admit what you're trying to accomplish. I have a blind spot for being able to project linemen to the NFL, primarily offensive linemen. For this, I tend to refer to the evals of others that I highly respect because I can take their descriptions and know what the Cowboys prefer at positions and match them accordingly. I did grade several prospects on my own, on skills that I think are important to success at their projected position. This included film study and measurables, but of course nothing about the mental makeup of each guy.

My big boards are the same rankings in two separate visual representations. A vertical board is what you are accustomed to seeing. Ranking all of the prospects from 1 to gazillion, and then you go back and insert tier points where you think there is a separation between rounds. Of course, there are two types of round separations. The first is obvious; 32 picks for the first round, 32 for the second, 32+comp picks for the third, et cetera.

The second is more functional. How many players do you grade as first rounders? As second rounders? That number is almost never going to be 32. Last year it was a small number; for me their were only 12 first rounders. This year, I have 18 and one of them is "in a box" (red flags, making him undraftable at the level where the talent would normally dictate).

However, what I feel is much more important to draft weekend is what's called a horizontal board. This takes the vertical ranking one step further, and allows you to place players in "pockets" within tiers. Grouping players in close proximity helps for a couple reasons. If you have 8 players in a particular pocket; you know that a trade down of 7 spaces still guarantees you are going to get a player you'd be equally comfortable with. You do have a ranking within that pocket of the order you would take each in; but it gives a visual understanding of how far you can drop and get a similar caliber player.

So without further ado, let's take a look at these prospects and how I see them for Dallas.

You have a couple options to view this behemoth of a file. Click the image below to open it in it's own window. Or you can follow this link to a Google Doc that will be easier for you to follow along with. The Google Doc includes both the Horizontal Board and the Vertical Board that is listed below. 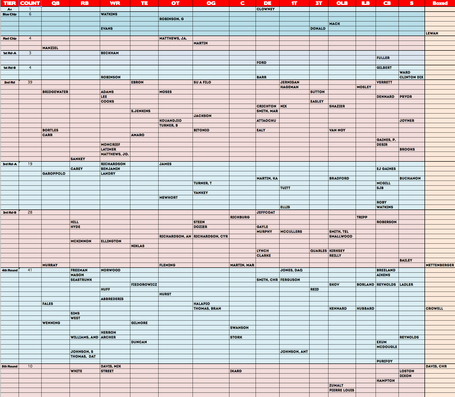 So, what are your thoughts?