The wait is over. The draft starts tonight.

Defensive-needy Cowboys open to using first-round pick on offense - Tom Orsborn, Express-News
The Cowboys have needs all over the place, but are determined no to let those needs dictate their choices over the next three days.

"The worst mistake you can make is over-drafting for need and leaving really good players on the board," coach Jason Garrett said at the team's pre-draft news conference.

Gosselin: Cowboys' many needs call for simple draft plan - trust your board | DMN
Rick Gosselin with some last-minute advice for the Cowboys:

Remember, you can never go wrong selecting the best player on your board. The goal is to build a team capable of competing for championships on an annual basis. Continually slapping draft-day patches on areas of need slows that process.

Trust your board. Draft the best players. Don’t reach. Take the value on a board that Will McClay and his personnel department have spent 12 months preparing. Build a roster, not a position.

If the defensive line board is light at 16, don’t reach — draft the player who makes you a better football team.

Jerry Jones: Cowboys Aren't Rebuilding | Richie Whitt, NBC DFW
The Cowboys are not interested in a first-round QB because the Cowboys don't see themselves in rebuilding mode.

Jerry Jones seeks defensive player with Cowboys’ 16th pick | Carlos Mendez, Star-Telegram
Jerry Jones believes a top defensive players will be available when the Cowboys pick in the first round at No. 16, but he'd be cool with it if that wasn't the case.

"That means there was some real value over on the offensive side of the ball, and that could result in a heck of a draft," the Cowboys owner said at the team’s pre-draft news conference. "To say it another way, if you’ve got somebody that shouldn’t be within 20 picks of you that was there, you add that value to the team. We have needs on the offensive side as well."

"We certainly think we’ll have an opportunity to address the interior defense. The question will be whether there will be an alternative there that is better for us — without being trite. There should be defensive linemen there."

Injuries wouldn't sway Dallas Cowboys' decisions in 2014 NFL draft - Todd Archer, ESPN Dallas
The Cowboys have a history of drafting players with various types of injuries, finding "value where others found risk," Archer writes. Stephen Jones said the Cowboys have to be cognizant of a player's injury history, but an injury history is not a red flag per se.

"I think you have to always measure the value that you’re getting, but at the same time I think one of issues at the top of the list the last couple of years have been injuries," executive vice president Stephen Jones said. "That was brought up in the draft room and we have to be cognizant of that injuries have been a little bit of what’s put us behind the eight ball a little bit. We’ll certainly have to take a long, hard look at that before we pull that trigger but that doesn’t mean we won’t do it. I wouldn’t say it’s out of the question."

Final Big Board - Bob's Blog
Bob Sturm offers his final big board of the 75 top players in this draft. Aaron Donald is # 6, Anthony Barr #9.

Broaddus: Full Projection Of All 11 Cowboys Picks - DallasCowboys.com
Broaddus offers what looks like his final mock draft before the draft, and has the Cowboys taking Odell Beckham Jr. with their first pick.

If Anthony Barr is on the board, I believe he would be the pick, but I don’t think he will be there. Aaron Donald will most likely be gone as well. Now the selection comes down to Beckham, Zack Martin and Ryan Shazier – all of whom would be great fits. I really do like Kyle Fuller as a dark horse because of his ability to play on the outside. Beckham’s ability to play all the receiver positions makes him too valuable to pass on here.

Cowboys need more Bradie James picks - Todd Archer, ESPN Dallas
Archer looks at the Cowboys success with fourth-round picks between 2003 and 2007 (Bradie James, Marion Barber, Chris Canty, Doug Free), and points out that the Cowboys have not found an every-day starter since. There is of course still hope for the recent fourth-rounders on the current roster (Kyle Wilber, Matt Johnson, B.W. Webb), but the Cowboys could well use a starter from this year's fourth round.

Seventh-round picks offer player value - Todd Archer, ESPN Dallas
Archer points out that the Cowboys have historically been fairly successful with their college free agents, citing Jakar Hamilton, Jeff Heath and Cam Lawrence as examples for 2013, who join other UDFA players from the previous year like Ronald Leary, Cole Beasley, Lance Dunbar, and Ben Bass. But instead of vying with other teams for the top UDFAs this year, the Cowboys can use their six seventh-round picks for that this year, something Stephen Jones is intent on doing:

"The seventh-round picks historically are throw-ins [in trades]," executive vice president Stephen Jones said. "I don’t know if the league has caught up to what value a seventh-round pick is, in terms of the quote-unquote ‘charts’ that are out there. If you look at what a seventh-round pick can bring you, you start to say the player [in the seventh round] is more valuable than boosting the bottom of the six [round] to five picks, 10 picks up to the middle of the sixth when a lot of times that player will fall to you anyway. A lot of times you see it as thrown-ins. I see it as a great opportunity for us to take six players that can help our football team."

How NFL teams ignore basic economics and draft players irrationally - Vox
If you've never heard of Massey/Thaler before, this is a good place to start: Their research clearly shows that teams should trade down and amass lower picks to diversify risk. Yet most general managers ignore this advice completely.

"This is a gang of monsters," Smith told USA TODAY Sports this week. "(UCLA's Anthony) Barr on down to (Buffalo's Khalil) Mack on down to (Pittsburgh's) Aaron Donald. There are guys in the second and third round that are coming out, even the fourth round this year, man."

Drafting A D-Ware: Buyer Beware " Bill Jones, CBS DFW
Jones points out that of the approximately 35 edge rushers drafted last year, only three accounted for more than 2 1/2 sacks in 2013. Which makes the task of finding DeMarcus Ware's replacement in this draft a very difficult one.

Even With Position Unclear, Excitement Rising For Crawford - Nick Eatman, DallasCowboys.com
The Cowboys are excited by Crawford's position versatility, but have not yet decided where to play him.

"We’ll wait to see what happens Thursday, Friday, Saturday, see where the numbers line up," head coach Jason Garrett said Tuesday at the Cowboys’ annual Pre-Draft press conference. "But (Crawford) has position flex. We could see him playing right end, we could see him playing left end, he’s played inside, he’s been a nickel rusher, so he really does have position flex. The big thing with him when you’re talking about deciding, his body can change a little bit. He might be 10 pounds lighter or 10 pounds heavier based on the starting point for his position. I do think it’s important to go through this draft process and see where the numbers are."

Crawford also got a good endorsement from Jason Hatcher, as Jerry Jones recalled.

"One of the last things Hatcher told me before he left town, he said, ‘That guy is going to be a perennial All-Pro,’" Jones said, recalling Hatcher’s words about Crawford. "He said, ‘He’s the real deal.’"

"@TrueBlue_RT: Jerry: @hatcher97 told me that @TCrawford_40 premium pro player ( I think those were the words lol)" I meant every word of it

Consider this the black hole (in rectangular form) into which the countless Manziel-to-Cowboys articles disappeared that were published yesterday.

Dropping back: Why is this class of quarterbacks in free fall? | National Football Post
Greg Gabriel basically argues that while fans and media pundits tend to quickly fall in love with the highlight reels of exciting college QBs when they look at this year's QB class, NFL personnel people see guys who are not ready to play the pro game for a number of reasons:

I said above, all of these quarterbacks have some flaws. Most have played in schemes where they cannot change plays or protections. They seldom, if ever, play from under center, and they go through very minor progressions as compared to the NFL game. While they have talent, they are not ready to play the NFL game. There is a learning curve, and many of the ones who have failed, played before they were ready.

Factoid of the Day: The last 17 Heisman-winning QBs (since 1989), have combined for exactly ONE playoff win (Tim Tebow) in NFL.

DCC Calendar Shoot: First Look - DallasCowboys.com
The mothership offers a behind-the-scenes look at the 2015 DCC Calendar Shoot in Cancun, with lots and lots of pictures. This is your chance to get a preview of some of the beautiful ladies that will grace our news roundups once the 2014 season starts. Here's one such picture, courtesy of DCStarMagazine's Twitter account: 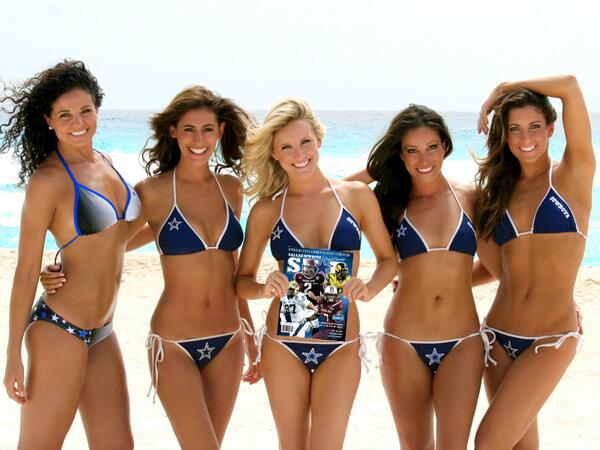