Is the Tampa-2 dead in the NFL? A look at the evolving Dallas defense, and whether the loss of Sean Lee will really hurt the Cowboys.

Let's begin with the statement that this article is going to present more food for thought about the evolving schemes we are witnessing from the defensive side of the ball. I will start with the middle linebacker and then cover other aspects that may be changing for the better.

The Mike is supposed to be the quarterback of the defense. It is his job to get the guys, (usually just the front seven), lined up in the correct formation to match up with the alignment of the offense. Previously in the Kiffin defense he had to be a very special player as you will see as you read on.

Will The Cowboys Use More "Heavy Nickel" Formation

A "heavy" nickel formation is when an extra safety is brought in to the game for a front seven player instead of a cornerback. Is that something we should expect to see more of from the Cowboys in 2014?

While Monte Kiffin and Rod Marinelli share a very similar school of thought, the Dallas Cowboys defense promises to look and act differently in the 2014 NFL season.

Will The Cowboys Use More "Heavy Nickel" Formation Defensive Shift In Philosophy Coming To Dallas?

The Mike also has the assignment of the first back out of the backfield in terms of pass coverage, although this can vary depending upon the type of alignment the front seven is in. The other two linebackers in a 4-3 are called the Will for the weak or non-tight end side, and the Sam for the strong side, or the side with the extra lineman that is usually the tight end. I mention this in order to foreshadow the idea that with all the spread offense's putting four and five wide outs in the route patterns, we will see that it is the linebackers that are replaced for those extra defensive backs that are used to cover those extra wide outs.

This leads to the question of will the middle linebacker be used in the typical way the Tampa-2 uses him? Or will Rod Marinelli change the way the Mike is used in this year's version of the new defense due to the loss of Sean Lee? We may see more single high safety play this year due to changes that are needed to the Kiffin alignments that Rod has shown he is not married to.

Now, I will state right now that one of the things this article will not do is to try to answer the question of whether the role of the Mike linebacker will definitely change. I am presenting a lot of detail information and will say that because it is Sean Lee that is missing, we may have to wait and see if the role or the person who plays the Mike changes depending on the package, base versus nickel or dime. I certainly am not the expert, only giving my thoughts on what I think I know. I can be wrong once in a while, heck, my wife says I am never right.

Before we talk more about the way the linebackers are supposed to play when they are not in their traditional 4-3 defense, let's talk about the three or four defensive linemen in front of them. Keep in mind the most important aspect of their alignment has more to do with gap control than it does defensive front, as in 3-4 front or 4-3 front. For more on this concept of gap control, see Joey's excellent article here.

PROS AND CONS OF ONE-GAP VERSUS TWO-GAP

First, from the defensive strategy, if you play a two-gap defense, unless you have some really big space eaters in the middle, you are saying to the offense, go ahead and fire off the offensive linemen and try to move us straight back, we dare you. And they often can back them up a yard or two.

Remember, the defensive lineman is trying to cover the gap to both the offensive lineman's right and the gap to his left, which means that if the offensive lineman gets a little push against the defender, then the defensive lineman has to be good enough to shed the block just as the ball carrier is coming through the hole and make the tackle. The running back will already be beyond the line of scrimmage and there is a good likelihood that if the running back just falls forward he will have picked up at least three yards. This two-gap is also often called the read and react style, while the one-gap is called an attacking style.

The advantage of the two-gap is that it keeps the linebackers clean to make plays and this is very helpful on plays to either side as the linebacker is free to get to the outside very quickly since he has a clean path.

The advantage of the one-gap is it allows all four defensive linemen to shoot the gaps and play in the backfield. And the linebackers are able to rush to their gap that they are responsible for and try to get there before the running back does. Keep in mind this is not how these gap-control assignments are always played, but it gives you an idea.

THE NEW COWBOY'S COVER ONE?

First a little refresher on what was the Tampa-2's main facets.

In the old Tampa-2, the "two" in the Tampa-2 was for the alignment of two deep safeties. In the Tampa-2 the corners play zone coverage and the middle linebacker will first read high-hat, low-hat, (and other keys), to determine if it is a run, and if it is not a run he drops back into the deep middle to cover that zone and among other responsibilities watch for the seam route. Also the idea on the run defense is to funnel the running back towards the Will linebacker to make the tackle. This graphic from SI.com illustrates the concept perfectly: 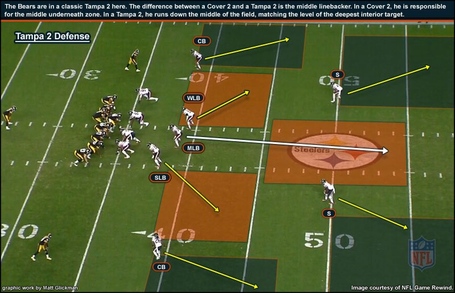 Now fast forward to Kiffin bringing that style of defense to the Dallas Cowboys. A great coordinator will fit his scheme to the talents of the current players skills. Don Shula said that many times. Well, Kiffin seemed to be of the opinion that the scheme was the key and that he could "coach-em up" no matter what. Also the middle linebacker must be a perfect fit for this scheme to work.

The Cowboys had two corners that had man cover skills and they were asked to switch to the zone concept. Needless to say it was not the right thing to do as many will attest.

Now to add to the growing evidence that the Tampa-2 is no longer a scheme that can be depended upon. In today's NFL you must have scheme flexibility so the offense must guess even after the ball is snapped just what the coverage will be. Marinelli is going to be more flexible and will mix his scheme more. Keeping the QB guessing was what I loved about Rob Ryan's schemes.

The game has passed the 74-year-old by. His once extremely popular scheme has been deserted by most of the league, and it felt as though he was helpless in terms of his ability to make adjustments in 2013.

What Lovie and Rod Marinelli are doing is using a good mix of scheme. When you use a good mix of scheme, the offense has to play honest. They can’t just drill Cover 2. They have to adjust their routes. Pro wide receivers, if they’re running a route that’s designed to beat Cover 2 and they see Cover 1, they have to adjust their route on the fly. The quarterback then has to be on the same page. It could cause them some confusion in that offensive game plan.

The Tampa Two Era Is Over In The NFL

Are we going to see more single high safeties? If we do, the play of the free safety becomes even more important. He must be the center fielder, have great range and help with tackling if the ball carrier gets by the front seven. Who will be that guy for us?

The Tampa Two demands a little more from its middle linebacker. While the outside linebackers still drop back to a mid depth to take away slants and crosses, the middle linebacker drops back almost 10 yards into a deep zone, covering tightends [sic] and wide receivers trying to attack the center of the field. The linebacker has to have the speed and athletic ability not common to the position. Brain [sic] Urlacher has proved to be the ideal fit for this defense because of his amazing coverage skills and speed.

The Tampa Two Era Is Over In The NFL

One thing that still works very well is the concept of rushing all four of the defensive linemen. In my memory I had thought that I had seen one of the defenders stay home and be more like a 0-tech in the 3-4 on a lot of plays, but Dave correctly pointed out to me that they all still rush the passer. All four of them. And the idea is to not have to send blitzes any more than necessary. You want to blitz sparingly and get all the pressure from your front four, so you have to send them all.

While the play of the front four may be the same, the play of the secondary is where I wanted to get all of us focused on, because the loss of Sean Lee may necessitate some additional scheme change, and I don't believe we have the perfect replacement to handle the needs of the scheme as it was last year with Lee available.

The nickel is usually a 4-2-5, (four linemen, two linebackers, and five defensive backs), but the dime package usually becomes a 4-1-6 and often the single linebacker is the fastest linebacker on the team which I will guess in Lee's absence should be Bruce Carter, and that will mean that Carter might be more important than ever to this team this year.

Dom Capers will sometimes go to a 1-5-5 front, sometimes called the psycho alignment or set. See this article over at jerseyal.com here.

So, we can all see that the impact of the linebackers in general are becoming less and less as the number of wide outs get to be more and more but what to do about Lee....hmmmm.

After I started writing this post, I did a little searching on the web to see if anyone else had covered this same thing, (the middle linebacker becoming a forgotten position), and if you would like some statistics, then I recommend you read this article here.

And Dawn wrote a nice article on the subject of this defense evolving here. Also, this ties in with a recent article by O.C.C. about the Cowboys using more of the Heavy Nickel and you will find that great article here. Both articles are featured in the "Must Read" links at the top of the page.

Well, there you have it, a little X and O stuff about the changing defense, the linebackers and the nickel and dime. Hope you enjoyed it. More to come.