In The Film Room: How To Maximize James Hanna's Impact

Over the last several years the Dallas Cowboys offensive coaching staff has not always done a great job of getting their secondary weapons involved in ways that increase their chances at changing the game. Let's take a look at how they made use of James Hanna once in 2013, and why it fit this player so well.

Share All sharing options for: In The Film Room: How To Maximize James Hanna's Impact

There is a common theme around BTB, and the rest of Cowboys Nation, that the Cowboys coaches have struggled, especially in recent years, to use their players in ways that maximize their talents. This is especially true for the secondary-type players, guys like Lance Dunbar, Gavin Escobar, and James Hanna,

However, in one flash of brilliance in Week 9 of the 2013 season, the Cowboys ran the exact concept that I feel maximizes James Hanna's skill set, and put him in a position to succeed. The result? A 21-yard explosive play putting the team in position to score. 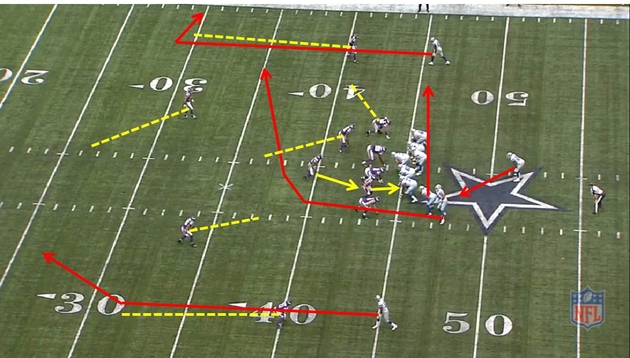 Above we see the alignment and assignment of both the offensive and defensive players on this particular play. This is following Hanna's motion across the formation from a Wing alignment on the right side. Dallas is running a play-action concept built off of the Split-Zone running scheme that is a base component of their run game. Minnesota is bringing the middle and strong side linebackers on a Fire Zone (5 Man Pressure with Zone Coverage) dropping the left defensive end into the basic Cover 3 shell.

The boot action by Tony Romo and the combination of the routes run by Dez Bryant (top), Jason Witten, and James Hanna are designed to create vertical stretches on the defense. 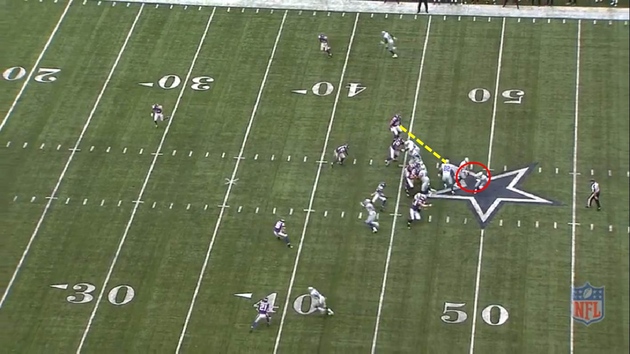 At this point, we can see the fake taking place in the backfield between DeMarco Murray and Romo, and we see Jason Witten crossing the formation just as he would on the split zone run.  We can also see the 3-deep 3-under coverage look from Minnesota developing. 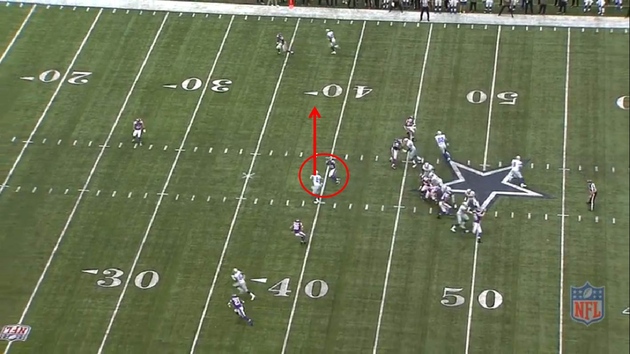 As the play continues to develops we see the match up developing as the weak side LB who has the short middle zone has turned to find the crosser. This action by the LB is very common against play action, especially considering the prevalence of crossing routes in combination with boot action by the QB). As with most zone coverages in the NFL today, the Vikings defenders aren't just dropping to a spot, but more, molding their zones around the routes being run. 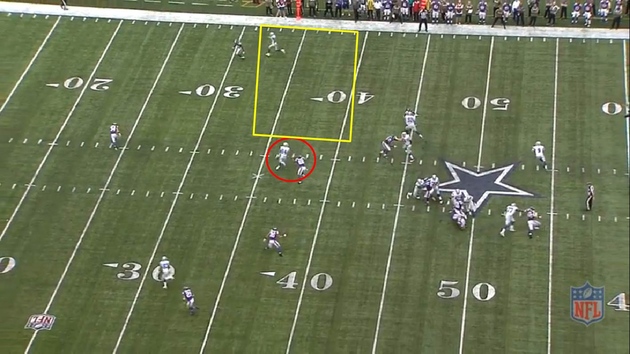 It doesn't take more than a couple of steps for Hanna to gain a distinct advantage over the LB and begin to create space. With the DE shadowing Jason Witten as he exits to the flat, and the CB staying on top of Dez as he pushes vertical, we can see a clear lane for Tony to deliver the ball to Hanna on his crosser. 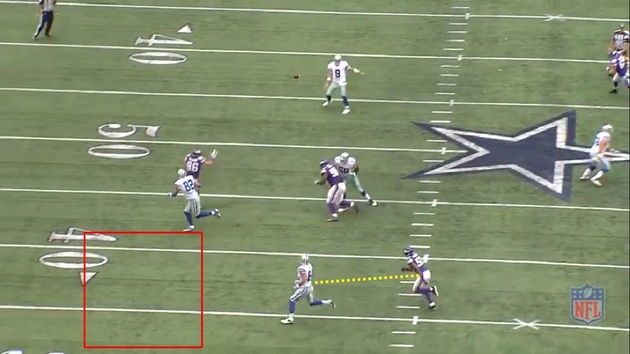 A quick switch to the end zone view here and we can see the amount of separation that Hanna's straight-line speed has created against this LB and the vacant area to which Romo can throw him into a run after the catch. 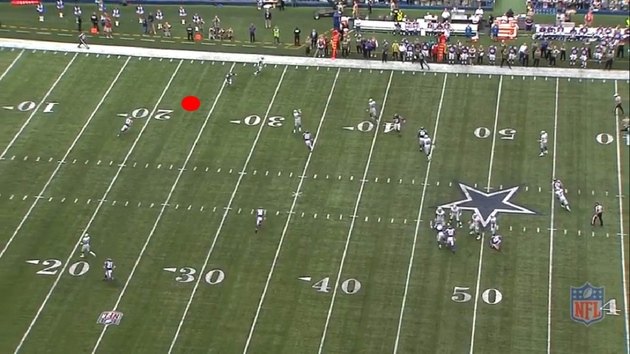 Now we can see Hanna at the point of the catch, reaching up and back to his right shoulder to make a nice hands catch, and turn up the field at the 33-yard line. The red dot represents where Hanna is brought down.

So what does this play entail? Nothing absurdly fancy, just a play-action scheme built on a running look you have put on tape every single week, and putting a very fast TE in a one-on-one foot race against a LB in space, setting up an easy throw, catch, and run for an explosive play. Hanna's straight line speed is unique among his counterparts at the TE spot in Dallas, and should be an asset to this Cowboys offense.

In my mind, there's really no reason the Cowboys shouldn't be able to get a look very similar to this at least once a week, using different pre-snap formations and motions, giving defensive coordinators one more thing to think about in preparation. In fact, as teams adjust, you may catch a FS trying to jump the crosser, leaving Terrance Williams wide open coming from the back side on his post route.