Archer cites an ESPN Insider piece that ranks the NFL's 24-man "starting" rosters (they include all teams' third receiver and a nickle corner) from 1-32. This ranking is derived be placing each of these starters into one of eight tiers, ranging from "elite" to "rookie." Here are the 'Boys respective lineups: 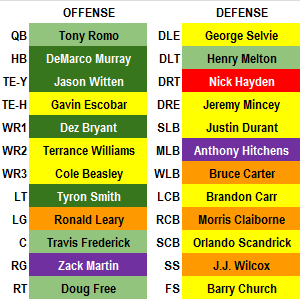 When all is said and done, the Cowboys come in 18th - just behind, gulp, Tampa Bay - thanks to having no "elite" players (no Dan Bailey? C'mon, man) and lacking any "high quality" starters on defense (indeed, only Henry Melton is given third-tier status).  In the NFC East, the Eagles checked in at No. 5, the Giants are at number 19 and Redskins have the 26th best roster.

In case you missed it, our resident offensive-coordinator-in-training offered an in-depth look at some of the ways Scott Linehan might use running backs to create mismatches, not only for DeMarco Murray and crew, but for wide receivers like Dez Bryant who suddenly find themselves in the slot when a running back goes in motion to the end of the formation. As always, Joey pens a must-read. Plus, he includes cool graphics!

The Broad One asks and answers three important off-season questions: will Dez Bryant receive a contract extension before Tyron Smith; will Zack Martin spend his entire Cowboys career at guard; and will DeMarcus Lawrence be the opening day starter? I'll let you hit the link to see all his answers; here's a preview re: Martin to when your appetite:

...even though I believe that he could line up at right tackle and be outstanding, his fit appears to be that of a guard. He is just such a natural-looking player when he is lined up inside. His body type, strength, power and mobility have that appearance of a guy that can play 10 to 12 years and never miss a beat.

Yes, I think I could be okay with that. Yes, indeedy.

This is exactly why Broaddus is so valuable. Here, he shares some inside scoop gleaned from conversations with his old scouting buddies inside the building at Valley Ranch (most of the OTA sessions are off-limits to the media). The first of his impressions should make Cowboys fans happy (or, at least, less anxiety-ridden):

I've been hearing that Bruce Carter has been doing a much better job of playing in coverage. I was told that he is playing with more confidence and looks comfortable.  In Thursday practice, while in a red zone period, he knocked the ball away from Lance Dunbar on an underneath route and had an interception against Brandon Weeden during 7-on-7 when he played in front of Jason Witten along the goal line, stepping outside to make the play.

Again, I have no problem with this development whatsoever.

In similar but ultimately less satisfying fashion, Machota offers a recap of the recent OTA doings. Most of this reads like one of our morning news posts (except for the, umm, attitude that creeps into our news roundups on occasion). Of all the items on Machota's list, I felt this one to be the most interesting situation to watch:

Entering OTAs, undrafted rookie free agent L’Damian Washington was regarded by many as a player to watch at wide receiver. But he recently suffered a setback, injuring his right shoulder. He will miss the rest of the off-season program.

Any of you ever had a beer with your boss? Yeah, so have I. But apparently, coaches and players socializing is such a bizarre concept that Jones the Younger has to defend the actions of two men who have been working closely (and, it appears, enjoyably) together for seven seasons now.

In an interesting take on the above, Sabin points out that, should the Cowboys founder in 2014,

[Garrett's] healthy rapport with Romo will be a selling point when owner Jerry Jones considers Garrett’s future with the club. Next season, Romo will be 35 and will have spent the previous eight seasons directing an offense principally designed by Garrett. As far as Romo is concerned, switching systems and introducing a new – and significant – variable wouldn’t be a comforting move at this advanced stage of his career. Keeping Garrett aboard would simply be more convenient for a quarterback who has directed only one other offense since he was elevated to starter.

Now that Colin Kaepernick has inked his new team-friendly deal, it's time to roll out tired saws about Tony Romo's back and his big contract and the ineptitude of the Cowboys' front office. But trotting out already exhausted memes is Watkins' stock-in-trade, now, isn't it?

For those of you who missed it, our fearless leader posted the preliminary training camp schedule yesterday as soon as it was announced. As it pertains to the next entry, I'll reproduce it here:

Although nothing has been finalized, it looks like the two teams will be practicing together for two days; the most likely timeframe would be August 12-13; I've placed an asterisk next to them above for context. The Cowboys have a 4:00 PM practice scheduled for the 12th and a 9:00 AM  practice for the 13th - days that, as Archer notes, would fit both teams' preseason schedules. And, as you can see, they would come at the beginning of the fourth week of camp, just when guys have been itching to hit someone in a different uniform.

And, finally, this snippet of conversation from Thursday's online chat with Todd Archer, from a fan who may have listened too closely to USA Today's 2014 record projections (in which the Cowboys were picked to go 3-13):

Kyle Jones (Cedar Park, TX): It appears that every team in the NFC East has improved from last year with the exception of Dallas. Sure Zach Martin is nice to have but it remains to be seen if this addition will translate to a better record. With that being said and the fact that the schedule includes the NFC West, do you see the Cowboys getting a top five draft pick next year?

Archer: I don't see anybody running away with the NFC East. The division needs time to rebuild. The Cowboys went 5-1 against the East last year. I think they can contend. To have a top-five pick, you're talking five wins or so, right? I think they'll be better than that. I think the offense will be able to carry them more. I'm not saying anything better than 8-8 right now, but I don't see 5-11 either.

See, that's why I like Archer's work so much. Dude always has a reasonable, level-headed response to the latest hype-driven doom-and-gloom scenario.