Football 101: Utilizing The The Slot Receiver

In today's NFL the use of the slot receiver has been one of the reasons that some teams can score over 30 points a game on a regular basis.

Share All sharing options for: Football 101: Utilizing The The Slot Receiver

The slot receiver, (who is sometimes designated the Y receiver, other times the F receiver if there is a tight end), has become a significant part of some of the high scoring offenses in the NFL these days. The slot receiver does not have to have a unique set of skills, but there have been two schools of thought on how to best assemble a group of wide receivers that can challenge a defense. The first school of thought is to have all of the receivers be the same type, such as all of them need to be tall receivers, while the other school of thought is to have the three main receivers be different. Let's look at those dynamics.

If you study what type of receivers seem to be needed in an offense, you will automatically remember that one of the receivers you need is a "possession receiver."  But, then you pause and ask yourself..."shouldn't all of your receivers be capable of being that type?"

Here is my opinion on what types of receivers a team needs.

Now let me give the reasoning.

Possession Receiver - This one is very obvious to all, the possession receiver has to have great hands and can go over the middle and not get what they call "Alligator Arms", meaning if the receiver sees a defender bearing down on him and he needs to reach out to get to the ball, you want him to reach and not pull his arms back and prepare for the hit. Seldom drops a ball that he can touch or reach.

Deep Threat Receiver - One of the outside receivers needs to have great speed because these guys will usually demand a safety to play over the top so he can't get behind the defense. Getting double coverage is very key to having a both a great passing attack and a great running attack because one of the safeties is not able to support the run if he is playing deep over the top.

Quick Threat Receiver - The prototype is Wes Welker. Guys with short legs have a built in advantage in quickness. Speed is not the same as quickness. Quickness is usually guys with great 10-yard dash times, while speed is the guys with great 20- to 60-yard times. This guy needs to get quick separation so he can be the guy that gets the pass from the QB when he has to get the ball out quick and can't wait for the routes to develop because he is either being blitzed or hurried by a great pass rush. This guy is usually the slot receiver.

Nelson would be the Packers' most obvious star X receiver, but that doesn't mean he is one. He has the requirements: height (he's the tallest of the corps, at 6'3"), size and leaping ability (have you seen his acrobatic catches?)

The attributes of Nelson's teammates would also seem to suggest that he's best-suited as a traditional X receiver. Jones is a little shorter but still very physical at 6'1", and he could also play the X but often plays the Z, or flanker. Cobb, of course, is a multi-threat, but at 5'10", he is the prototypical slot receiver who is smart, small and quick. [emphasis added]

Without talking about the "receiver route tree", ( Select the 2nd line in the drop down below ),

we will talk about the choices of routes the Slot receiver has available. These routes are usually determined by the way the DB lines up in front of him. Usually they line up one of three ways:

The DB may want to try to direct the slot receivers choice to the two choices that the DB likes. If the DB thinks he can match up better if he tries to make the seam or slant the better choice for the slot receiver, he will line up with outside leverage as shown below:

If he uses straight-up leverage, the slot receiver will have the slant or the out routes available to him.

If he uses inside leverage, then the slot receiver will think the seam or the out are his best options. 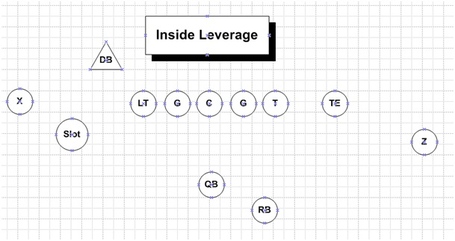 what a stupid quarterback, he threw it right to the linebacker. What's wrong with him, can't he see?

Below is a good visual of the different routes possible for the slot receiver. Notice in this photo, the DB is playing with slight inside leverage, probably because he suspects that a slant is the likely play call here. This picture came from a very good article on the route tree. 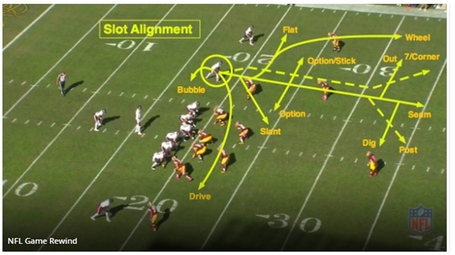