BTB Mailbag: The Language Of A Play-Call

What exactly goes into the language of the play call and the cadence by the quarterback at the line of scrimmage?

Share All sharing options for: BTB Mailbag: The Language Of A Play-Call

BTB-member Allan Uy sent in this mailbag question: "Would you be able to translate the language used in a play call and at the line of scrimmage?  For example, Romo often says "180"  before snapping the ball. I understand that the team doesn't let anyone outside see their playbook, but maybe you know of some playcalls either for us or another team. I'd love to better understand what's being said in the huddle and at the line."

This is a great question from Allen, and something that, once you understand it, can really make you sound like a football genius with your buddies around a TV or at your favorite watering hole.

Before we get too deep into the nuts and bolts, I will point out that the language used in the huddle and at the line are some of the primary differences between offensive "systems" we hear so much about. For example, a west coast offense like the one run by new Washington Redskins head coach Jay Gruden will have a play call like "Green Right Slot Spider 2 Y-Banana" while an Erhardt-Perkins offense like the one run by the Patriots play call will look like "Six Zing, 82 Ole- Read Circle".

So for the purposes of this discussion I will speak in either general rules across offensive systems or Cowboys specific methodology, and attempt to distinguish between the two.

When a QB steps into the huddle to call the play, he has to communicate several elements within the play call. For example, a pass play call needs each of the following components to be relayed.

While a run play call needs to relay:

Knowing how much has to be relayed you can see why these play calls can be so wordy. Lets look at a couple of play calls that Tony Romo might make in the Cowboys' huddle this year and break them down.

This call breaks down as follows.

When we put it on the Chalk board, it looks like this: 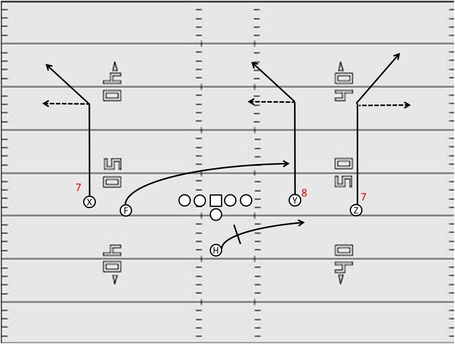 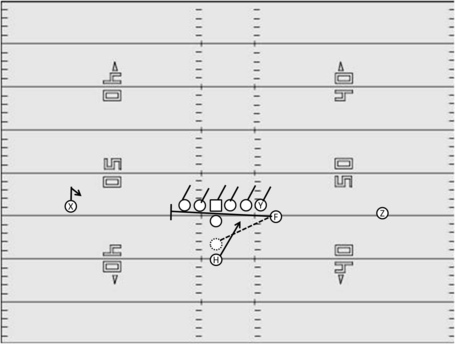 Once the team breaks the huddle and gets to the line, there are several calls that are made. Usually the first call is when the QB or center declares who the "Mike" LB is. This may or may not be the middle LB for the defense, but this is used to set the protection, because each protection call designates a player to have responsibility for the LBs if they rush. By designating the Mike, all responsibilities in the protection can be pointed out with one call.

If the QB sees that the look he's getting from the defense for the play that is called in the huddle is unfavorable, it is his job to get his team into a better play. In this case, one of several scenarios will occur.

One line of scrimmage call used regularly by several NFL teams, is "OMAHA". For most teams, this call tells the team that all motions and shifts are off, and that the ball should be snapped on the next sound by the QB. This is commonly used when the play clock is running low. In this case the QB may be at the line, maybe adjusting the protection, based on the front the defense is showing, and sees only 5 seconds left on the play clock. He would call "Omaha! Omaha! GO!" and the team would run the play from the initial alignment.

So there we have it. Allen, I hope you feel as though this response is sufficient, and might help you have a little bit better understanding of what is going on from a verbiage standpoint on Sundays this fall.