Recounting a blue-ribbon experience on Sunday at the Cowboy-49ers game, replete with perfect seats, on-field access and player high-fives. If only it weren't for that stinkin' game...

During training camp - where, I believe, we were the only two lay people who attended every practice - I was invited by my Cowboys-lovin' friend Knowledgeable Cowboys Fan (KCF) to join him for the week one contest against San Francisco. KCF, as it happens, is a die-hard fan whose love of the Cowboys prompts him to do whatever possible to obtain as much access as someone not affiliated with the team can have.

Which means that, when a lucky soul - lets say, Ol' Rabble - joins KCF at a Cowboys game, that person experiences the same degree of access upon which KCF insists. The result is that this lucky soul, who has been a Cowboys fan since 1975, had one of the very best experiences in his long-tenured fandom, second only to his attendance at Super Bowl XXVII in Pasadena (52-17, for those of you who are Roman-numerically challenged)

What was the experience like? I'm glad you asked. Our pregame challenge, if you will, was that we had more events to attend than we had time to attend them. We decided that our first stop should be the tailgate party put on by a sports tour company for fans who had purchased a travel package for the Niners game (we did not, in fact, purchase one of these; I told you KCF does whatever necessary to get access).

The tour folks did a superb job setting up a great experience for fans: a cluster of tables under some trees where folks enjoyed some good barbecue, an indoor pavilion where others watched the morning games on two huge screens and, along one wall, Cowboys legends (Randy White, Drew Pearson, Jay Novacek, Larry Allen, Charles Haley and Leon Lett) signed autographs. Oh, and lots of cute hostess types wearing skimpy costumes.

Next, we hustled over to the stadium (the tailgate was a couple blocks away) to pick up our passes to the "high five line," which is something new the Cowboys marketing braintrust have introduced (oh, if only the football braintrust were as innovative as the marketing side!). The deal is simple: fans go down into the bowels of the stadium, line up outside the locker room and wait to high-five players as they come out for pre-game warm-ups. I know, right?!

This occurred in two waves. For the the first wave, individual players came out in shorts and t-shirts to warm up alone or in twos and threes, often with headphones on in order to get mentally prepared for the combat to come. As luck would have it, the first guy out of the locker room after we got into position was Dez Bryant, who appeared very, very happy to be playing a meaningful football game. In fact, KCF's theory is that Dez works too hard during this pre-pre-game session, with the result that he expends much energy - and sweat - that should be saved for the actual game. The fact that Dez had to leave the game due to dehydration only confirms KCF's opinion.

After pressing some more flesh, we used our...drum roll, please... pre-game field passes to go onto the field and watch these individual warm-ups. The first person I saw when I got on the field was Emmitt Smith. The second was Brad Sham: 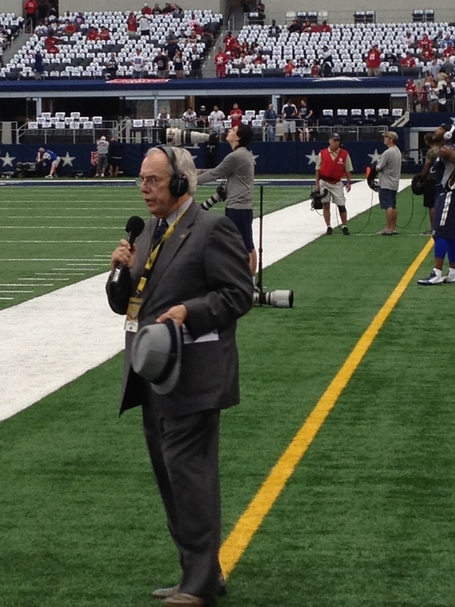 Pretty darned cool. Then we walked to our assigned section of the sideline. As it happened, Devin Street was running patterns along our sideline, and in such a manner that it was clear he was going to be suiting up for the game. Also working near us were Ken Bishop and Davon Coleman, who seem to do nearly everything together. Fitting, I suppose...

When the players left the field, we followed them back up the tunnel and waited for them to come out, now dressed in their uniforms, for the official warm-ups. As you know, these are conducted more or less by position group: the kick returners come out first, then the backs and tight ends, with the quarterbacks, etc. As a result, we were able to send all the offensive skill players out onto the field with a congratulatory hand slap. As the tight ends were passing by us, James Hanna, who had just finished taping his wrist, asked whether I wanted a "some souvenir tape." Of course, I said yes. I mean, the answer is obvious, isn't it?

After the skill position and defensive backfield guys left the locker room, we decided to return to the field to watch them warm up in earnest. We were positioned in the "red" section, which was the sideline and end zone corner where Vernon Davis caught his first touchdown pass. As it happened, the defensive linemen used that corner of the end zone, so we had a close-up view of Rod Marinelli and Leon Lett putting them through their paces: 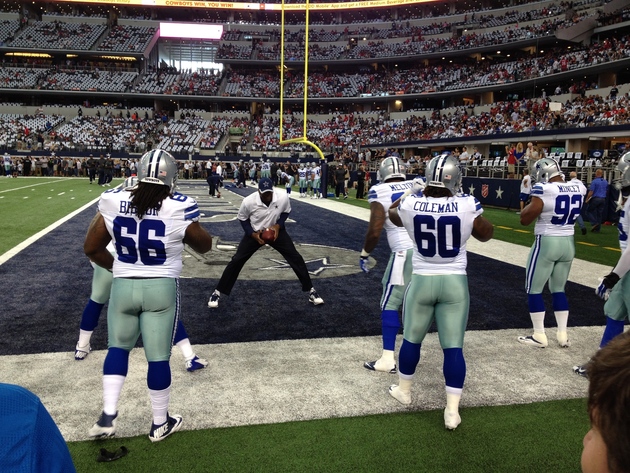 Oh, and we stood right next to Michael Sam, as he watched his position group working.

Along that same sideline, the linebackers worked as well, mostly on wrapping up drills. In addition, we had a good view of the quarterbacks throwing to the various receivers: Dez, Jason Witten, and others thundered by as they ran under passes from Tony Romo and Brandon Weeden. In fact, about the only group we couldn't see close up was the offensive linemen, who were in the opposite side of the end zone.

When they players left the field to go back to the locker room to get their game faces on, we hustled up to our seats. Before we could sit, down, of course, we had to take advantage of all the amenities in the Founder's club, where our seats were located (incidentally, we sat about ten rows in front of the Jones family's suite, so we were easily able to witness the consternation on Jerruh's face during the game - during which he always seemed to have a glass in his hand. Johnny Walker Blue, perhaps?).

The founder's club operates according to a basic principle: we have everything you could ever want, Texas-sized. So, there were long rows of sandwiches, salads and sides, a nacho bar, an ice cream bar, a candy and cookie table, a huge table laden with candy, carving stations, with prime rib (and a mighty fine horseradish sauce, I must say). Oh, and an open bar. Needless to say, we piled our plates high and went down to our seats, congratulating ourselves on our shrewd negotiation of the laundry list of pre-game activities, and feeling that they had built up nicely to the big event.

And then there was the game. As I told my podcast partner, Landon McCool during this week's podcast, I still had a plate of food balanced on my knees when it was 21-3. Jerry Jones was right, I think to say that this start reminded him of the 1994 NFC Championship game - and not just because both were against the 49ers. Both featured such a sudden, catastrophic series of events that they were, in effect over before all the fans had even settled into their seats. In fact, the game was so devoid of tension that even the seas of 49ers fans who filled the stadium were relatively quiet throughout, after being VERY vocal early, especially during the long Kaepernick to Vernon Davis touchdown referenced earlier.

Ultimately, we didn't allow this to dampen our experience too much. As I shared with my wife via text: 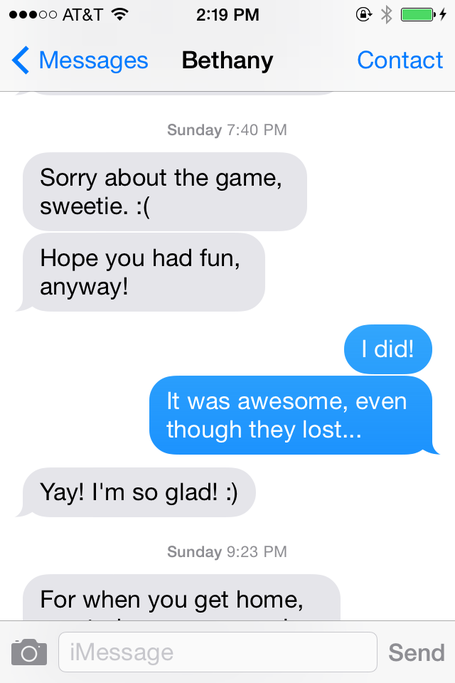 After the game, we went back down to the field level to run around and have our picture taken on the star. On the way there, however we stopped to watch Jason Garrett's and Tony Romo's post-game pressers. The press room at the Stadium had three solid walls and one made of glass, so that fans clustered around the adjacent bar can watch the question-and-answer as they celebrate or drown their sorrows. I would have preferred to celebrate...

We finished our day with a second visit to the field; this time, we weren't limited to the sideline. So, we walked around, took pictures on the star, and tried to locate the places on the field where the few Cowboys highlights had occurred (Bruce Carter's sack was one we looked for). At exactly 30 minutes after game time, the stadium ushers hustled us out and our day at the stadium was at an end.

That didn't mean, of course, that our football day was over. We went to a local establishment that specializes in sports, BBQ and, shall we say, well-endowed and scantily-clad women to soak up the Colts-Broncos. As our weekend had started on Friday night, with an initial visit to AT&T to watch two of the best high school football games KCF said he'd ever seen (an assessment with which I concurred) - including Southlake Carroll's 42-41 OT victory over Tulsa Union - it was fitting that it ended with more football.