Let's look at the Titans offense to see exactly what the Cowboys are preparing for in Sunday's match up.

Studying the Tennessee Titans offense in their game against the Kansas City Chiefs in week one reminded me a lot for good reason, of when I studied the San Diego Chargers offense early in the 2013 campaign. The Titans head coach is the former offensive coordinator in San Diego, and many of their concepts and emphasis within the scheme remain consistent with what we saw from the Chargers last year. 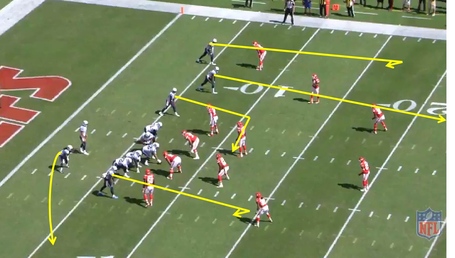 Here we have the Titans in 11 (1 RB, 1 TE, 3 WR) personnel, which they were in most of Week 1, with trips to the left and the TE and RB to the right the Chiefs' defense counters in nickel personnel and rotates their coverage to the trips side. You can see that the OLB and CB are the farthest defenders to the offenses right, leaving a ton of space for the short easy throw to McCluster out of the backfield, getting him out in space quickly with a chance to make a big play. 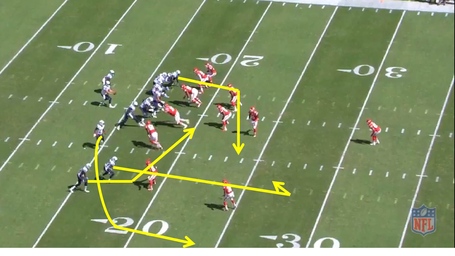 Here we see the Titans again in a similar formation as before, in 11 personnel, with trips opposite the TE and RB. However this time they are using a bunch to the near side. Bunch formations are a great way to create favorable match ups and make playing straight man coverage nearly impossible. Most teams will counter with a coverage call that delineates who takes the first threat inside, and outside. The route combination out of the bunch is designed as a way to get the Titans talented WRs in good positions. You'll notice the wheel route, which has consistently been a problem for the Cowboys in their current defensive regime, whether it's Danny Woodhead in San Diego in 2013, or Vernon Davis in this year's season opener.

Using misdirection to create yards after the catch 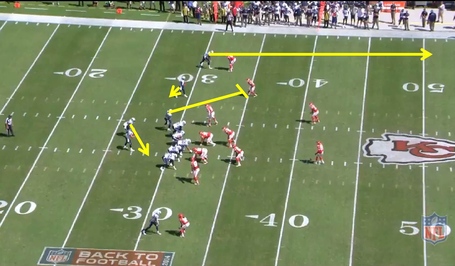 Here we see the Titans using play-action out of 11 personnel to throw a backside screen to WR Kendall Wright and let him use his ability with the ball in his hands to make plays. By showing the shot gun run action, which is a big part of their running game, they are able to create full flow to the offenses right, and then throw the ball back side to Wright, with the TE Delanie Walker getting out in front to block the slot CB, which when combined with the clear out route by the outside WR, creates a nice open area for Hunter, and gets him one on one with the safety in space.

Finishing drives in the red zone 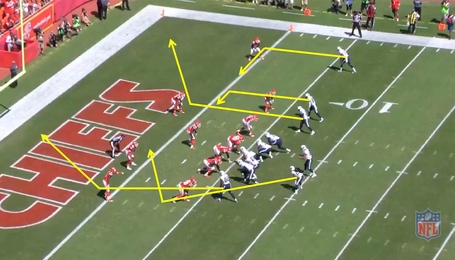 Here we have the Titans in 11 personnel back in their familiar trips alignment. The trips side concept is the red zone staple, double smash-7 (corner) concept, and the TE/RB side is a high-low concept that really puts the LBs in a tough spot with zero room for error. With this concept the angle route by the RB will likely draw the LBs forward to prevent the easy completion, allowing Locker to throw over the top to Walker for the score (as he did in the play above). Having a RB with the quickness and receiving ability of McCluster really adds to the Titans red zone attack, because of his ability to make guys miss.

The Cowboys defense largely exceeded expectations in week one against the 49ers, despite their struggles playing zone coverage out of fear that Colin Kaepernick would beat them with his legs, and they are in for another test in this Titans offense. Whisenhunt has a history of helping QBs perform very efficiently and if Jake Locker makes good decisions he has very good weapons in the trio of Hunter, Wright, and McCluster to get the ball to. The Titans' offensive line is probably better than the group that the 49ers put on the field in week one which featured backups at RG and RT, however, Tennessee's left guard, Andy Levitre struggled with the power that the KC front was able to bring both against the run and rushing the passer, consistently giving up penetration. This game will be a good test for the Cowboys defensive line that actually generated decent amounts of pressure in week one.