Let's look at the Titans defense to see exactly what the Cowboys are preparing for in Sunday's game.

I have always had a great deal of respect for Ray Horton as a defensive coordinator. That respect has only increased over the last few years as he has bounced from Arizona, to Cleveland, and now to Tennessee, and has been able to have a great deal of success no matter the organization. Horton runs a 3-4 based scheme that he learned during his time as the defensive backs coach under Dick Lebeau with the Pittsburgh Steelers. Horton excels at designing the fire zone schemes that Lebeau is famous for, which help his team get pressure on the QB without leaving the secondary exceedingly vulnerable to big plays. 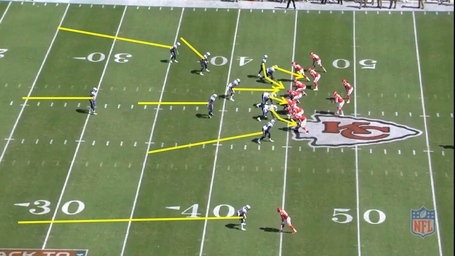 Above we see the on of the Titans' Fire Zone schemes from the All 22 angle. This shows the basic idea behind the scheme. Bring five guys in the rush, and drop six into a three deep three under zone coverage. The five rushers can be made up of just about any player on the field, and the simple three deep coverage allows for LBs or DL to drop into one of the underneath zones while rotating the deep zones if necessary to send a CB or both safeties into the pressure.

Now we can get a good look at the actual pressure scheme. This is the same play shown above, but this time using the end zone angle. One of the advantages of being able to drop DL into the underneath zones is that it allows you to create overload rush situations like the one above. They are able to bring four rushers to the offense's right of center, giving them a chance to get free runners at the QB. Here you see the DB coming into the rush in a twist game with the OLB in this dime look from the Titans.  Also notice the DL on the open (weak) side of the formation, who scoops wide outside to take the contain responsibility in the rush. 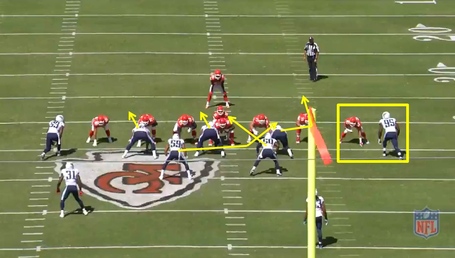 Here we see the Titans bringing five players in the rush scheme, but playing man coverage behind it with safety Michael Griffin (33) in the middle of the field. This rush scheme features the "Pirate" game that the 49ers were able to use to free up Justin Smith for a sack on Tony Romo in the Cowboys week one match up. Here LB Wesley Woodyard (59) loops around the other OLB, and the shade nose, who both angle their rush to the defenses left, allowing Woodyard to attack the B gap to their right. Again Jurrell Casey scoops outside to the contain responsibility.

I have highlighted the matchup between the OLB, Kameron Wimbley (95) and the Chiefs TE. If the Cowboys are able to get this matchup for any of their three TEs it is something they should be able to take advantage of, as Alex Smith did on this play.

Making plays and scoring points against this defense will be a big task for the Cowboys offense in week two. Jurrell Casey is a game-wrecking pass rusher up front, and Jason McCourty is a play maker at CB. Combine these talents with that of Horton, and there is a chance for this defense to continue their week one performance through out the season. This scheme will provide a test for the Cowboys offensive line in protection for sure.