Cowboys Running Plays: Breaking Down Why They Are Working So Well

The Cowboys running game is now "a thing". How are they doing it? We look at three plays that reveal all.

Share All sharing options for: Cowboys Running Plays: Breaking Down Why They Are Working So Well

The Dallas Cowboys run game was magnificent on Sunday. As Jason Garrett noted, they ran against every front the Tennessee Titans threw at them. Jeff Fisher, coach of this week's opponent, the St. Louis Rams, already had an idea the Cowboys ground game can be beastly after the performance in week one.

Jeff Fisher on Cowboys' run game: "We're very familiar with the 49ers, and to rush for 118 yards against the 49ers is saying something."

Time after time Cowboys running backs were running through huge holes against the Titans, then breaking tackles once they did get hit. The Cowboys used some very basic plays to rip off huge gains. The success of the running game is revealed through excellent blocking and nice patience from the running backs.

The Cowboys are running the stretch play, zone blocking down the line to their left, moving in perfect unison. The Titans defense was shifted over to their left pre-snap, leaving a very vulnerable weakside. 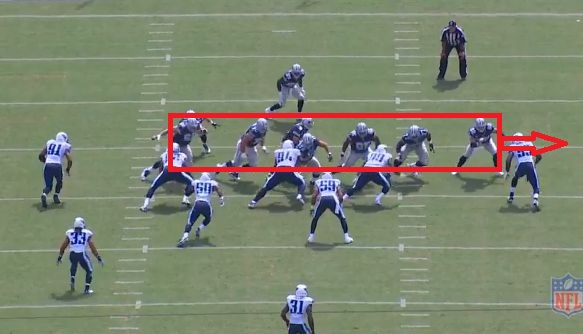 As the play develops, the Cowboys offensive linemen either engage, or see no one in front of them and head to the second level. Zach Martin has his man (red circle) while Ron Leary has got his block with a chip from Tyron Smith (yellow circle). Travis Frederick and Smith are also in position to go to the second level (orange arrows). 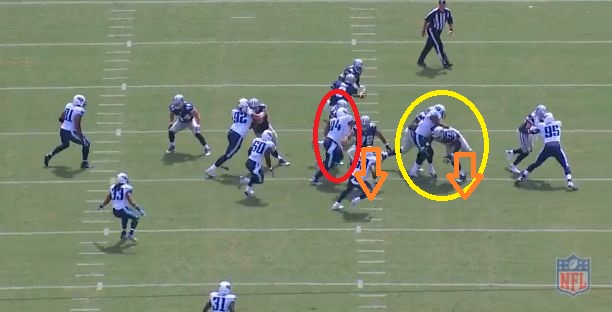 A huge hole opens as Leary and Jason Witten run their guys out of the picture (right side) and DeMarco Murray plants his foot and heads up field untouched (green arrow). Smith (red circle) is blocking down field while the wide receiver (yellow circle) also holds a block. 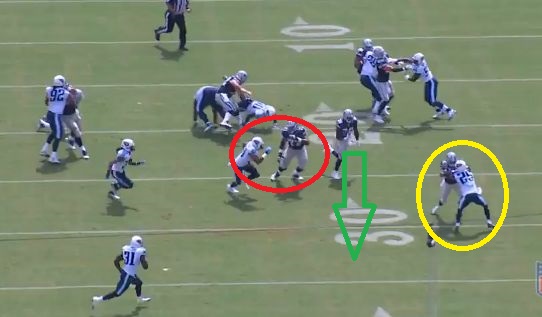 The Cowboys ran this play over and over, gouging the Titans defense for 10+ yards on multiple occasions.

Here the Cowboys are in a straight ahead, power run scheme. Jason Witten has the end, Ron Leary has the tackle with Tyron Smith looking to help or get up field to the linebacker if needed. Travis Frederick and Zack Martin will double team the other tackle. 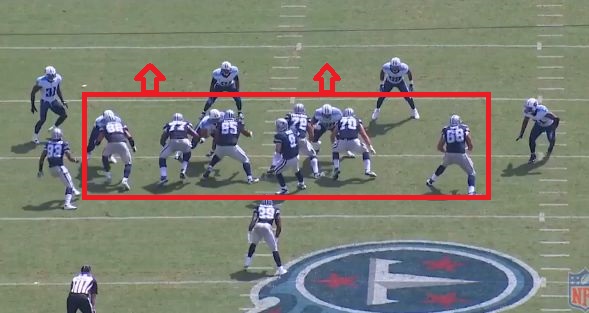 After the snap the Cowboys get hats on their defenders, holding the line of scrimmage steady. Here is where good patience from the running back pays off. Murray presses the hole between Terrance Williams and Jason Witten (green arrow). The Titans defense end, who is being blocked by Witten, is forced by Murray to work back toward the gap (yellow arrow). 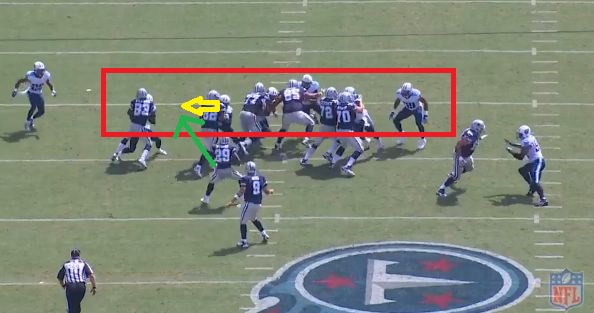 Once the end commits to the hole (yellow arrow), the gap between Witten and Smith becomes huge with Murray taking off through the middle (green arrow). Meanwhile the Cowboys blockers have all held their blocks along the line (red boxes). 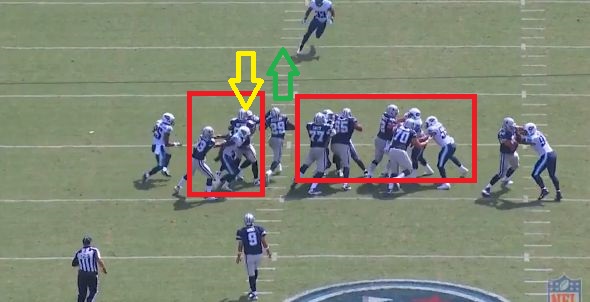 Doesn't get much more basic than that in the running game playbook. But the Cowboys offensive line, tight ends and wide receivers all commit to the blocking scheme. And the running backs are all doing the same. Watch Joseph Randle run the same basic play and show the same patience.

A very similar play to the previous one, the blocking patterns are a little different but much of the action is the same. This time Jason Witten and Tyron Smith double team the end while Ron Leary and Zach Martin have single blocks on the tackles. Travis Frederick is already looking for the linebacker.

Witten and Smith get the end stood up, while Leary and Martin get the same on the tackles. Frederick is hitting the linebacker at the second level. Out on the very left end James Hanna has walled off his man. Randle takes the ball and presses the hole between Smith and Leary (green arrow). The free Titans linebacker moves in to cover the gap (yellow arrow).

Bam. Once the Titans linebacker jumps in the gap that Randle had pressed (orange circle), Randle pops it outside and has open room (green arrow). Hanna (yellow circle) has his block and Terrance Williams gets to his man (yellow circle). 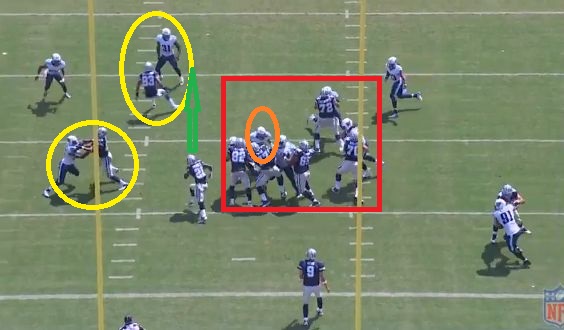 The Cowboys are taking very basic plays - no fakes, no pulling guards, no counter action, just basic stretch plays and power runs - and turning them into huge gains. If you can do that on a regular basis, you will be a successful football team.