Let's look at the Rams offense to see exactly what the Cowboys are preparing for in Sunday's match up.

Offensive coordinator Brian Schottenheimer receives a lot of criticism from Ram fans who believe that he has not done a good enough job utilizing the weapons he has been given, particularly a guy like 2013 first-round draft pick, Tavon Austin. Austin was electric at West Virginia but has yet to reach his potential at the NFL level. With starting QB Sam Bradford out for the year, and back up Shaun Hill missing last weeks game after leaving the season opener with an injury, the Cowboys look to be facing a third-string quarterback entering only his second full game of action in his second pro season.

Getting the QB on the move

The majority of the Rams passing game is based off of play action. The following is an example of the Rams using the boot, to give the young QB a half field three level read for a completion. 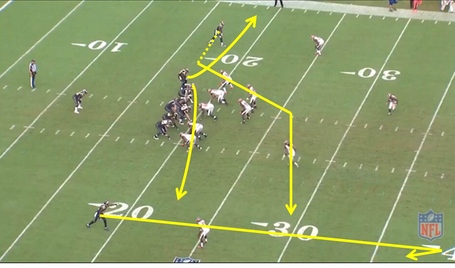 In 12 personnel (1 RB 2 TE, 2 WR), St. Louis puts both TE to their left. The Z receiver at the top of the screen uses "divide" motion to move towards the core of the formation giving him a reduced or "nasty" split. This motion, or alignment, should be an automatic boot alert for the Cowboys defense. The Y or in line TE has the shallow crosser, while the Z runs the over or deep crosser. The X on the near side runs a deep comeback. This combination gives Davis a fairly clear picture as he gets outside the pocket following his play fake. 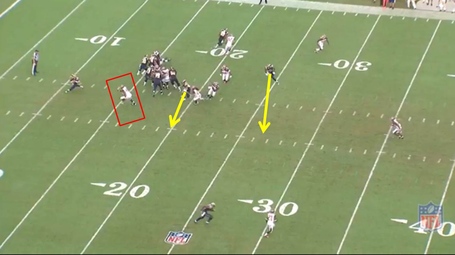 Here we can see the shallow and deep cross developing as Davis breaks the pocket after the run fake the other way. The backside contain DE for Tampa Bay is in decent but not great position. At this point the Bucs LBs are in retreat mode. Because the deep crosser is such a common route in boot concepts many times you'll see a Mike LB turn his head away from the QB to find the WR running across the field. You can also see the single high safety for Tampa driving down to the crosser. 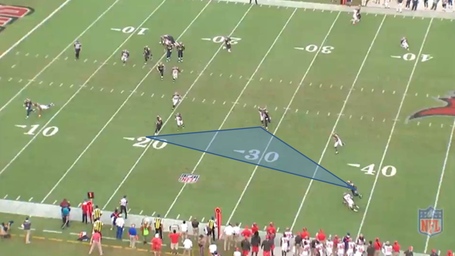 This gives us a good look at the picture that the QB sees on this play. He has 3 receivers on this side, and can choose the level of the D that he wants to attack, short, intermediate or deep. This type of concept is used a lot by offenses to attack single high defenses whether man or zone. 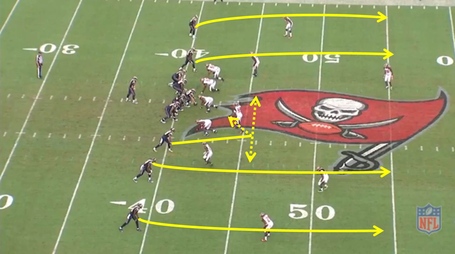 Here we have St. Louis in an empty backfield look. With 01 personnel  (0 RB 1 TE, 4 WR) on the field, Schottenheimer is looking to expand the defense, and get an easy throw underneath the the #3 WR on the near side. The route combination is as basic as they come. Four verts is in every high school, college and NFL play book, and is a staple of the modern passing game. A defense like Tampa's (and Dallas' for that matter) that wants to prevent the big play, will have their underneath defenders take very deep zone drops against this concept, leaving lots of space underneath for run after the catch.

Pushing The Ball Down Field 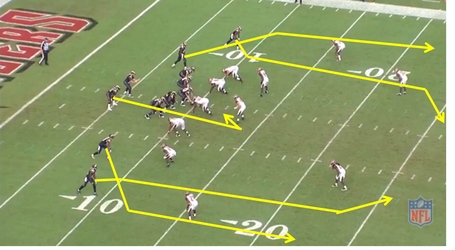 Here we see St. Louis in 11 Personnel again, this time running the post-wheel combination on both sides of the field. In this situation Davis picks a side pre-snap based on alignment by the defense, and reads Wheel-Post-Curl on that side. This is another situation where the Rams staff gives their young QB a half-field read to allow him to make a decision and quickly attack the defense. Because of the crossing action by the receivers on both sides, there is a bit of a pick on the inside defender, usually leaving room for the throw to the wheel. This combination has given the Cowboys fits for the last two years (2013 San Diego, 2014 San Francisco), especially when they play Cover 3, due to the CB's failing to pass off the post to the FS and move to the wheel.

The Rams offense is not overly impressive. Austin Davis played okay against Tampa Bay, but Shaun Hill struggled against Minnesota, and we saw how poorly the Bucs defense showed in week three. I can see the things they are trying to do to help their QBs succeed, but I don't see enough to make me think they can outscore the Cowboys when Dallas is on their game.