Share All sharing options for: NFL Power Rankings Heading Into Week 1 Of The 2014 NFL Season

You can feel the excitement of the approaching new season. You’ve done your homework. You've read every training camp report. You've built countless permutations of the 53-man roster. You've started having dreams about the BTB Roster Builder. You’ve scoured the internet for players on the waiver wire and you've followed the roster cuts like it was the real NFL Draft. There's only one question left to answer:

Nobody really knows, but there's an elite among the football cognoscenti who can answer that question without so much as blinking an eye, and they can even put a number to it: The people regularly publishing NFL power rankings would like us to believe that they know exactly how good the Cowboys are. So let's take our first look of the season at a collection of power rankings and where they see the Cowboys.

And we'll get started with a power rankings chart from Massey-Peabody Analytics, whose numbers indicate that the Cowboys will outscore most other NFL teams quite comfortably. We may have to get used to Arena League-type scoring levels, but as long as the Cowboys outscore their opponents, who cares how many points they give up? 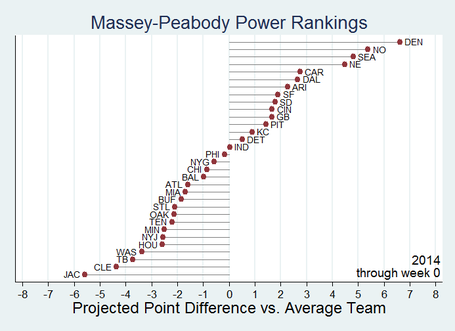 Massey-Peabody generate their predictions by working up from play-by-play data to calculate a performance figure for rushing, passing, scoring and play success, and they refreshingly buck the consensus opinion assembled below.

Oddsshark: 21st. Oddsshark use a multitude of stats to establish an offensive and defensive power ranking, which they then adjust for the strength of schedule.

NFL.com: 22nd: "Ironic that all those NFL analysts who disparaged Tony Romo over the past several years are now the same ones yapping about how he's the only thing that will keep the Cowboys from finishing 3-13. Truth is, Romo has been the best player on the team for a couple of seasons now.

The player who held that title three years ago -- defensive end DeMarcus Ware -- is, of course, in Denver after being released by Dallas this offseason. That's OK, though; the Cowboys didn't need him, anyway, as the defense looks awesome. Wait ... "

ESPN: 23rd (13th): "Dallas could have the worst defense in history. The The Boys lost Jason Hatcher, DeMarcus Ware and Sean Lee (again) from a defense that allowed the third-most yards ever last year."

CBSSports.com (Prisco): 24th: "They will score a ton of points. They will have to with that defense. They should be fun to watch, but they will struggle to win a lot of games."

Shutdown Corner: 24th. "Dez Bryant is at his peak power. I'm not sure how teams can defend him."

Foxsports: 25th: "Rookie offensive lineman Zach Martin is living up to the hype and the entire offense looks like it could take another step forward under new offensive coordinator Scott Linehan. Unfortunately, there has been no reason to believe that the defense won’t finish dead last."

Newsday - 26th: "Even the hyper-optimistic Jerry Jones calls this season "an uphill battle." More like a team headed downhill fast. But hey, at least the Cowboys are No. 1 in something. Too bad the most valuable franchise in the NFL doesn't translate into a Super Bowl contender."

Covers.com: 27th. "Expectations are not very high for Dallas this season and that could be a good thing but it faces a very tough opening test here. The Cowboys are 6-13 ATS in their last 19 home games but did go 2-0 ATS as a home dog last year. "

The table below summarizes the power rankings for the four NFC East teams.

Overall, and without taking Massey-Peabody into account, that's quite a depressing picture for the Cowboys. But at least we'll have the season-long fall from grace by the Eagles to look forward to.

Where would you rank the Cowboys as they head into the 2014 season?